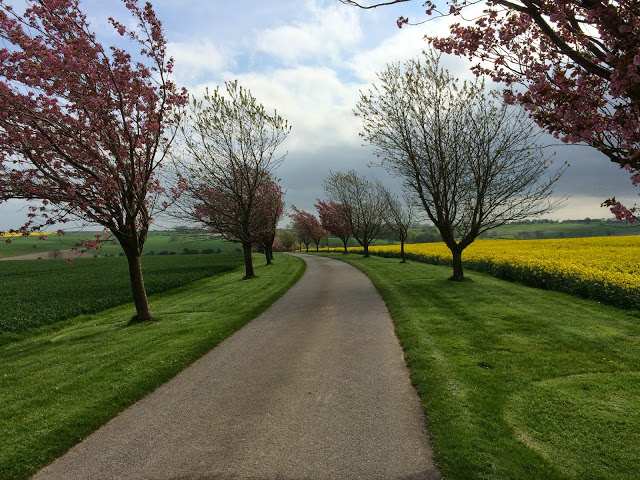 I kind of thought we’d get up really early and get on our way with the birds seeing as we were camping, but that didn’t happen. Somehow things take longer in the morning than I expect when I’m with someone else. We ate breakfast biscuits and experimented with eating chia seeds sans yoghurt. I managed mine with a banana. Poppy managed them on their own – but then she has been known to take part in strange challenges which involve eating spoonfuls of dried marjoram or cinnamon or
chilli flakes – and at least these had some crunch.
Then we set off down a long straight road which looked as though it should lead to adventure. 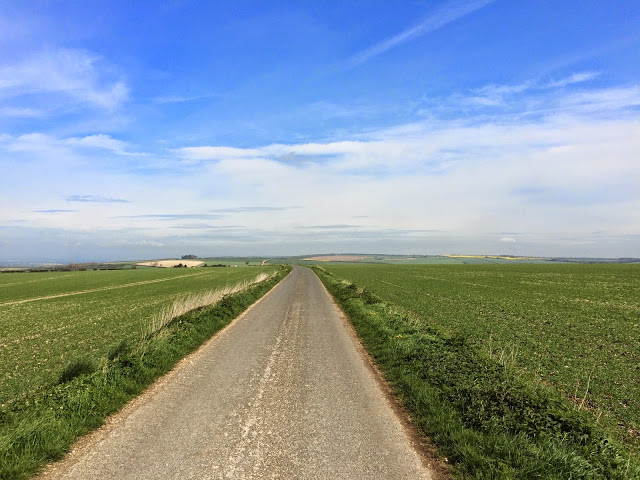 Very soon the path turned left from the road and we headed down the hill to Wharram Percy, site of
a medieval village and a deserted church. 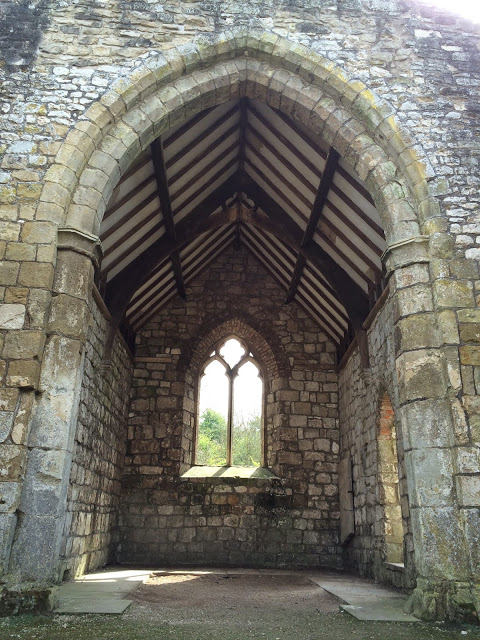 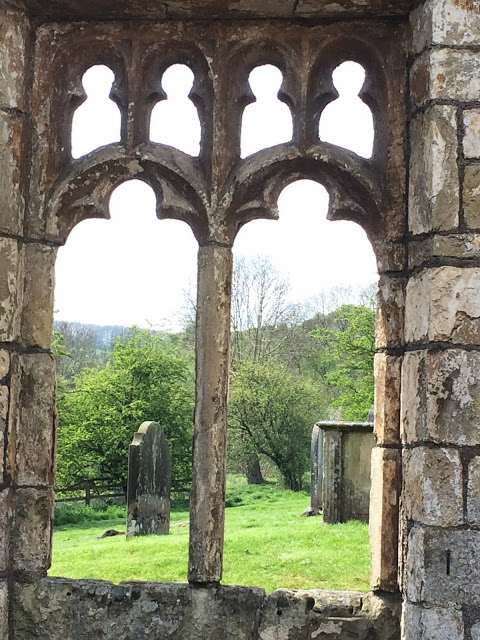 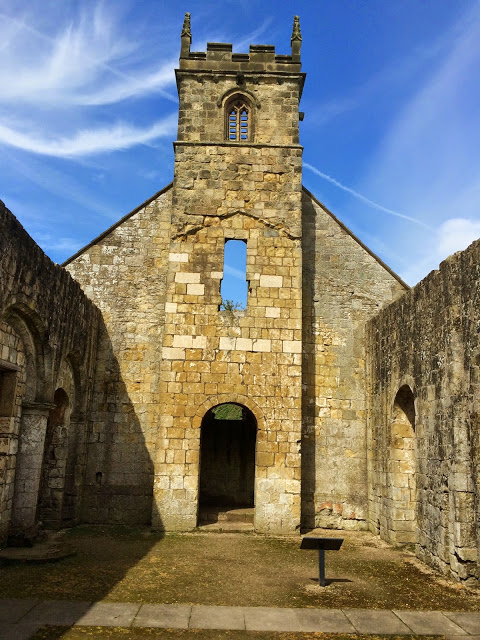 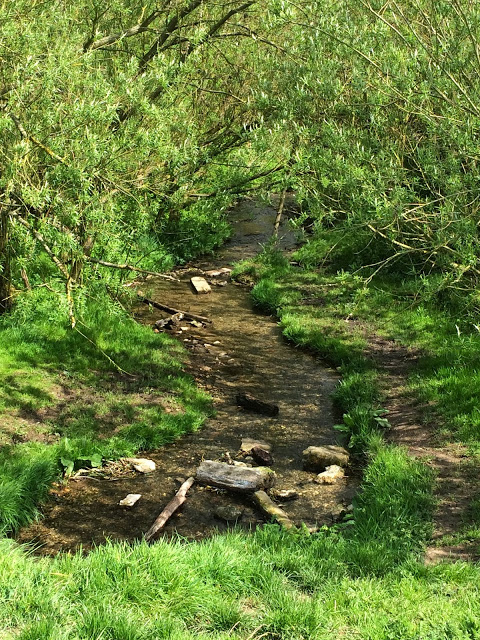 The landscape continued to remind us of Hockney, which isn’t really surprising as this is his stomping ground. Yesterday, except for the odd moment, it wasn’t that inspiring. There are only so many field edges you can walk before you feel that you’ve really done field edges. Today was different. Today we felt like we were in the Yorkshire Wolds and that we’d never been anywhere like it before. According to Wikipedia, a wold is a wooded area on high ground. There wasn’t a lot of woodland in evidence, patches here and there maybe.  What was striking was not so much the hilltops as the valleys – green flat bottomed Vs, dotted with sheep, streaked with chalk and yellow rape fields, topped with huge skies. There was a lot of up and down, but it was definitely worth it. 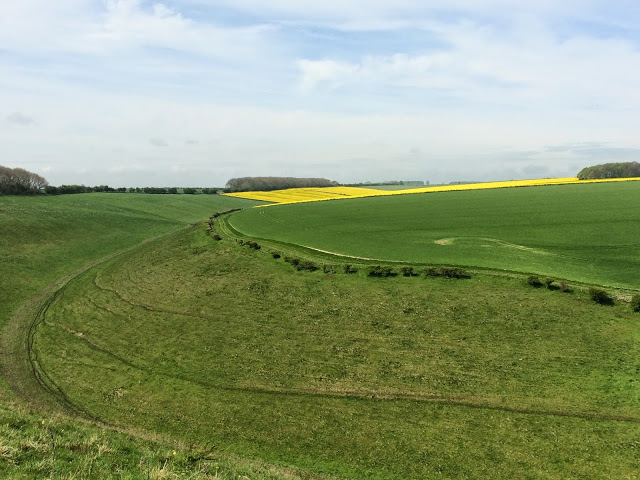 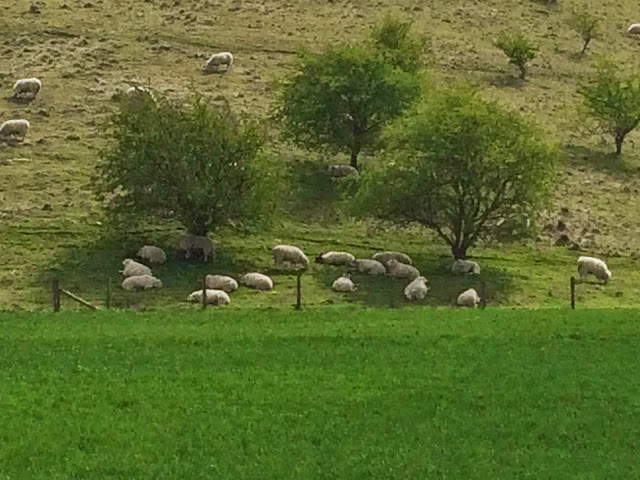 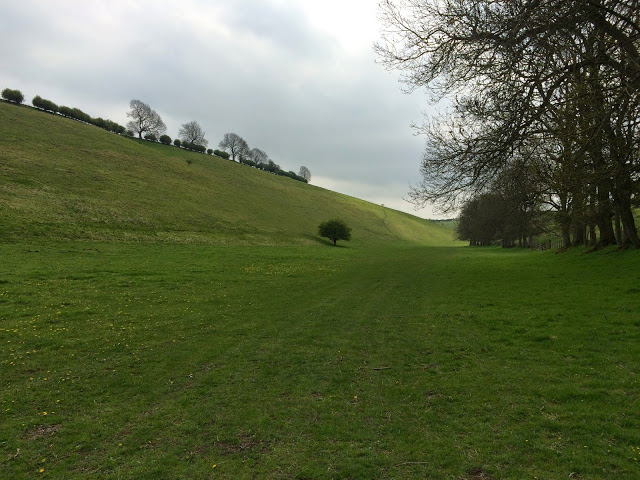 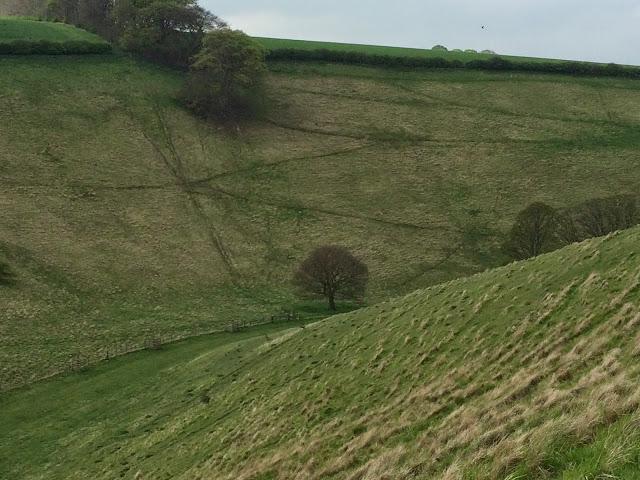 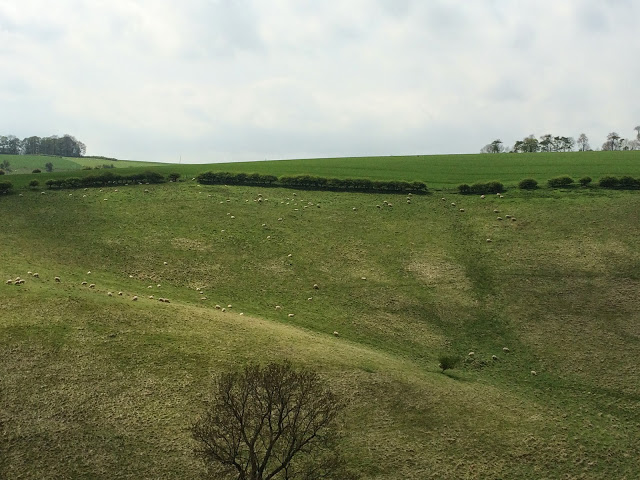 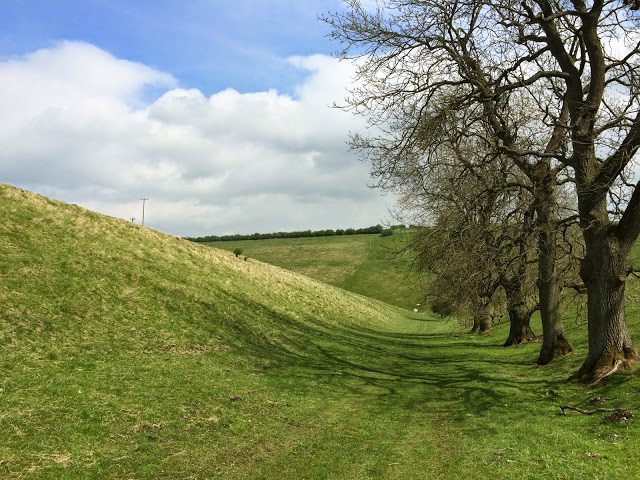 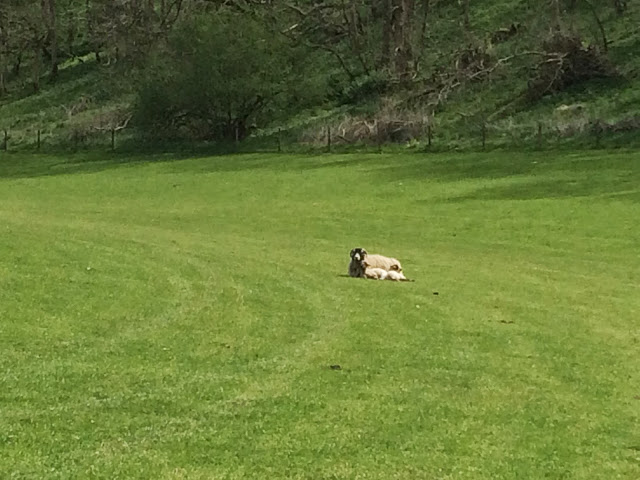 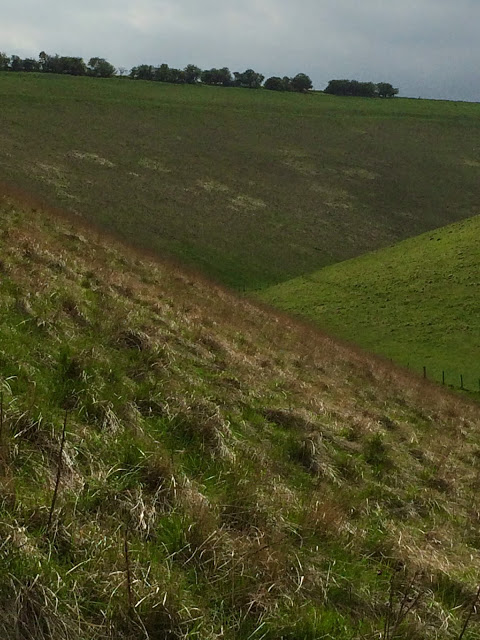 However, we’d made a late start and we just weren’t walking as fast as I’d expected. I’ve discovered that clifftop-walking is faster than wold-walking. Getting to camp before dark was once more an issue.
The lane into Huggate, our planned lunch stop, was amazing. Mown verges, an avenue of cherry trees in blossom against the yellow rape and the grey sky. Never mind Hockney, I felt like getting out my own paint brush and I don’t even have one. It was a bit posh though. I mean, just a country lane – why was someone coming out with the mower? Then we realised it was not just a lane, but the driveway to Northfield House. 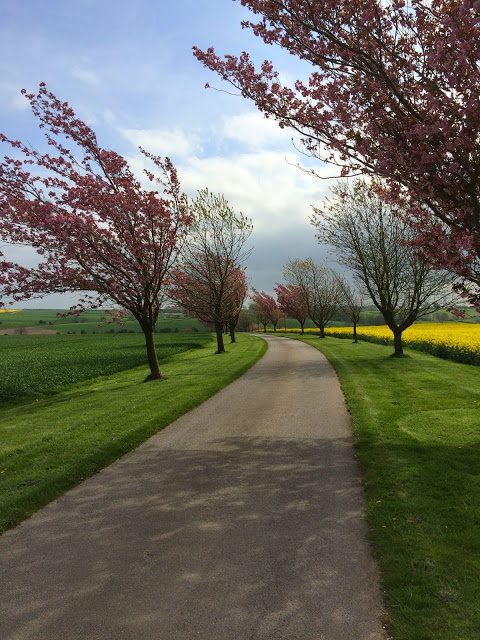 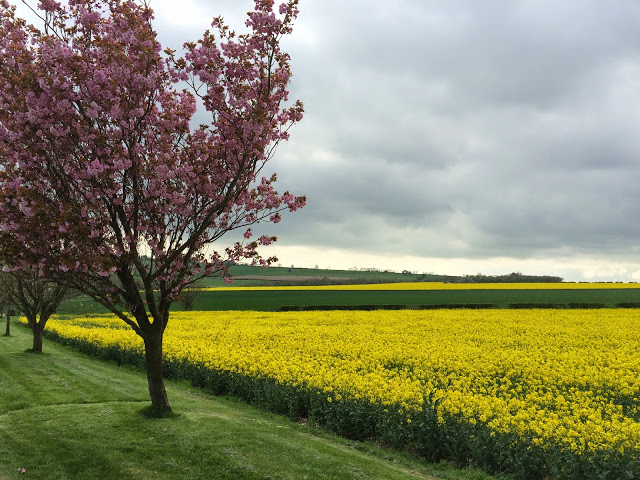 In the pub over a late Sunday lunch we decided on another taxi hop, this time to Londesborough. It took a while to get a taxi – four different phone numbers – but eventually a jolly retired gentleman turned up to take us on our way. Poppy had by this time acquired a stick which she put into the car boot along with our rucksacks. The driver laughed – ‘What’s that for?’ he said, ‘catching rabbits?’ The drive was through a beautiful pastoral landscape which commanded huge views across the countryside. Our driver proudly told us that on a good day you could see York Minster as well as three smoking power stations, which he pointed out and named for us – Drax, Eggborough and Ferrybridge. Then he pointed to some wind turbines on the hill, white against the green and yellow, like the chalk beneath.  ‘Those things
are just unsightly,’ he said. 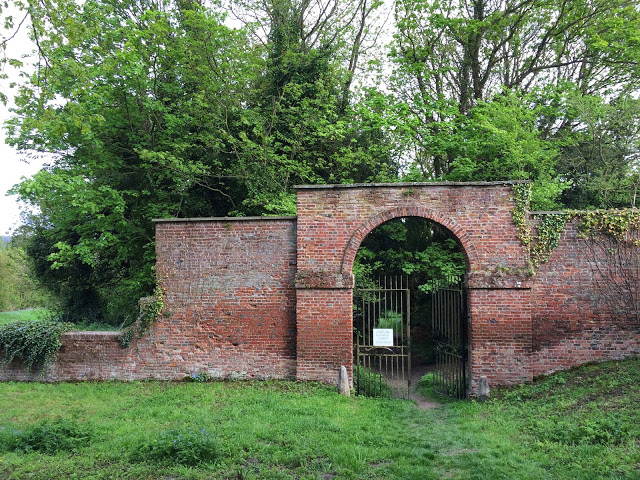 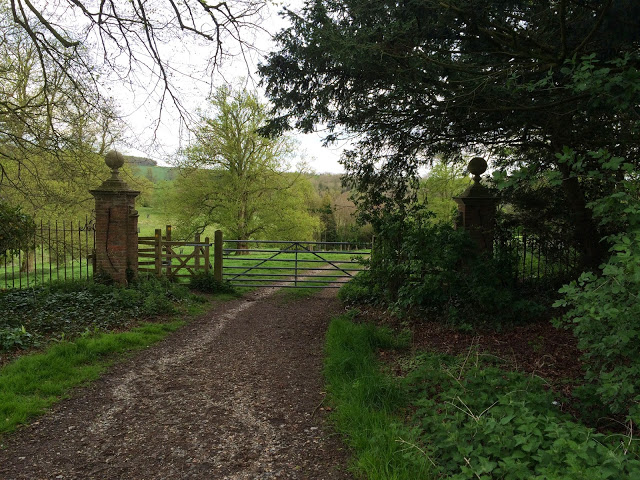 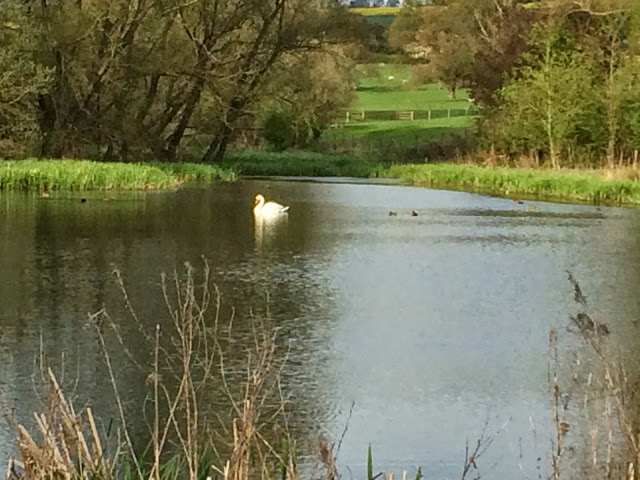 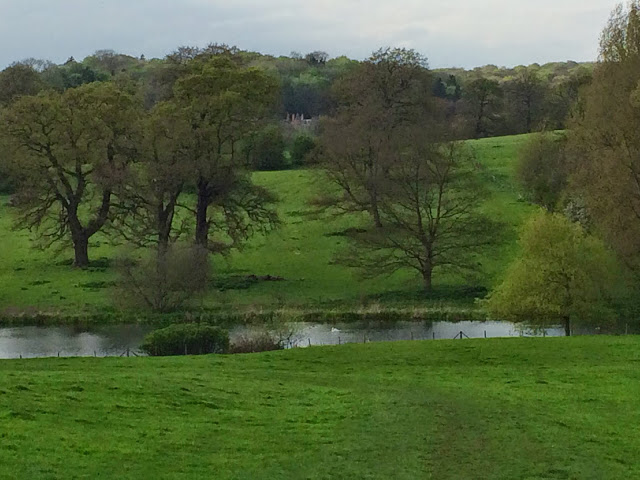 Londesborough is part of a country estate – the kind which swallows up villages and generations of lives, and which used to make up much of England.  Walking along its leafy lanes past brick cottages with roses growing around the doors, and through the gates to the Park where game birds hopped in the undergrowth, we realised we felt just as out of place here as we had in Hartlepool. There we had felt like
snobs, uncomfortable, middle class. Here, in Tory heartland, we felt like strange creatures from another world. 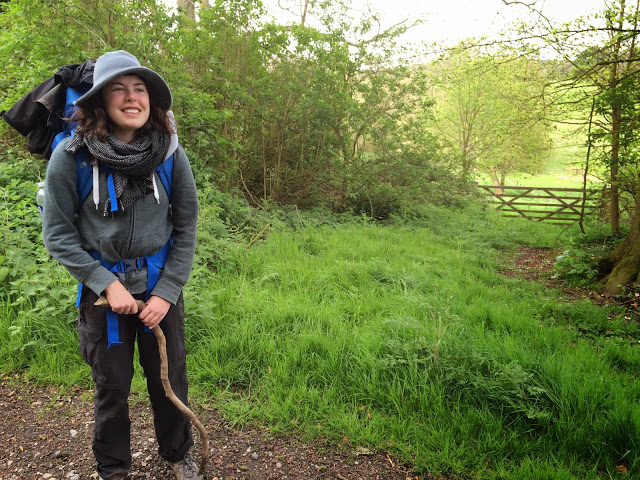 There was no evidence here of poverty, of deprivation, of need. There was nothing unsightly. Perhaps when they are invisible it’s easy to believe in rapacious immigrants and benefit scroungers, in the same way as it’s easy to believe in demons and bogeymen and things that go bump in the night. Or maybe we’d have felt differently if we hadn’t set off on this walk immediately after the election.

On the far side of the Park there were cows – a heard of beautiful creatures with their calves, sitting in the evening sunshine chewing peacefully. One of the calves was lying right in front of the gate we were
aiming for. However much I tried, Poppy would not be reassured and we had to take another diversion. But eventually were reached Goodmanham (in the pub at Huggate they’d asked where we were headed and I said Goodmenem – running the syllables together, assuming that was the correct pronunciation. No, no, a man told me – it’s Good Man Ham. Do you get that? Good. Man. Ham. Three syllables.
I said yes I got it. Three syllables, he said, Good Man Ham. I nodded. He was still saying it as we drove away. Good Man Ham Good Man Ham).
The  campsite was just outside the village. The toilets were next to the farmhouse which was in the
village, a few hundred yards walk away. They couldn’t have toilets in the actual field, the owner explained, as the neighbours were worried about gypsies. She unlocked a room next to the toilet block, or rather a hall. It was like the games room at a residential centre for school trips. It had a pool table, about 40 fold up chairs, trestle tables, an exercise bike, a fridge, sink, cooker, the Goodmanham Village Emergency Plan and a cabinet of trophies won for racing driving. Some people prefer to stay in here, the lady told us, and not bother putting their tent up.
The wind was up. It was cold. The campsite field was far away. This room had heat and light and electricity and a sofa. It was a no brainer. The owner even offered us a shower, towels, tea and milk, and hot food. 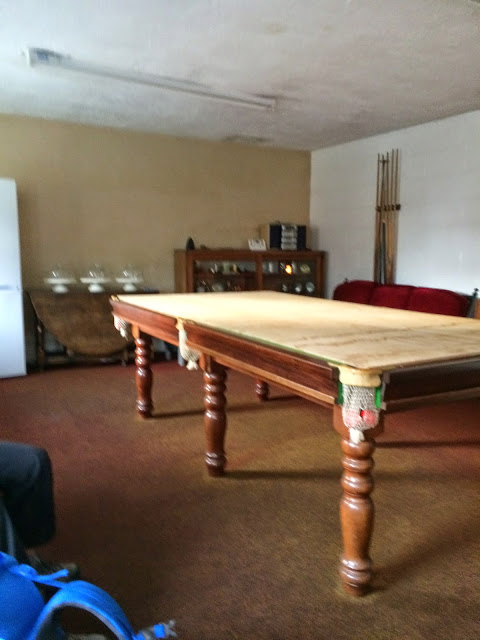 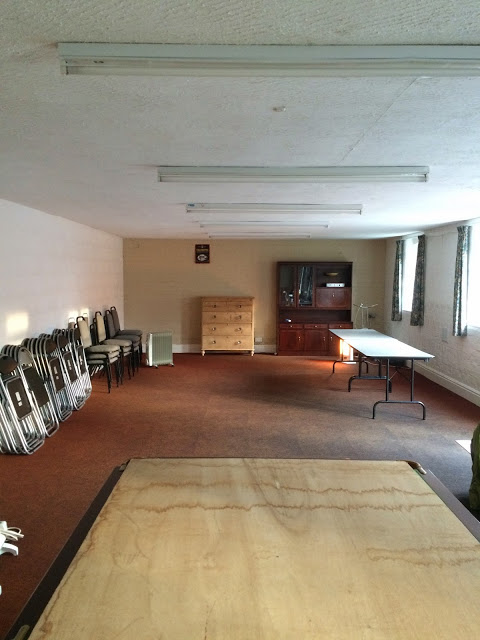 And although this was a brick building rather than a rickety shed, and the floor was carpeted rather than bare stone flags, and the sofa was in good condition with no families of mice in residence, it reminded me of Bethany again. Makeshift indoor camping, cavernous outbuildings and the generosity of strangers.
18.5 miles
0 comments… add one