St Abbs to Berwick upon Tweed 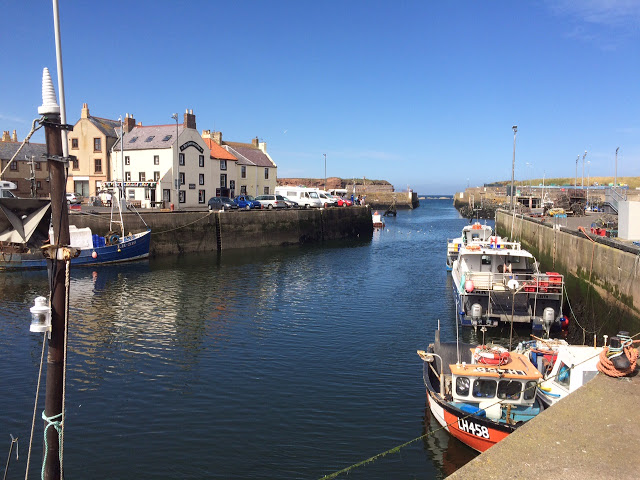 This week was mostly a holiday in Berwick upon Tweed, but on Monday I walked from St Abbs with Poppy and Mike, and on Tuesday I led a writing workshop at Berwick Library. Apart from the fact that some of the participants thought they’d come to a talk, the workshop went very well. One man said he’d opened up parts of himself he hadn’t known were there, which is pretty good feedback if I say so myself.
I’d met Mike for the first time two days before. I wasn’t sure if he really wanted to spend the whole day walking, or if he was just being nice. 15 miles is a lot of nice.
We got the bus out of Berwick. It was  20 mins late but no one waiting at the bus stop seemed worried or bothered and there was no apology or explanation when it arrived. Maybe timetables are a bit more relaxed around here. Soon we were shooting up the A1, past the Welcome to Scotland sign, then off onto country lanes with no slowing down. Most people got off in Eyemouth, but the bus rattled on to Coldingham and St Abbs where we got off feeling slightly sick.
We started along the coast path. 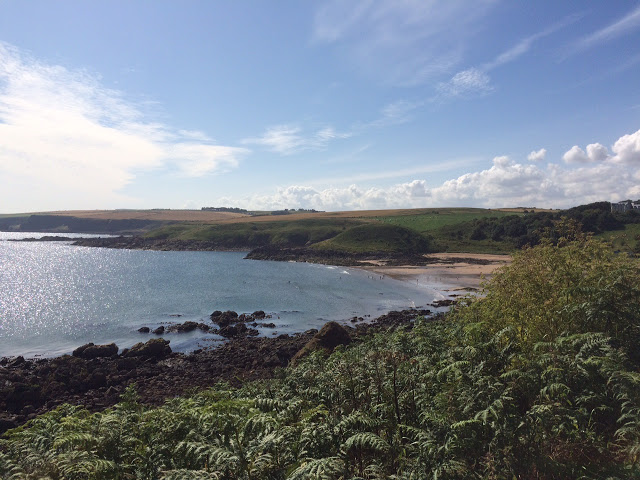 Poppy wasn’t comfortable. She unzipped the bottoms off her trousers, but that wasn’t enough. She removed her boots.
We walked across Coldingham beach, which was lovely, and into the next rocky cove, where there were amazing rock pools. 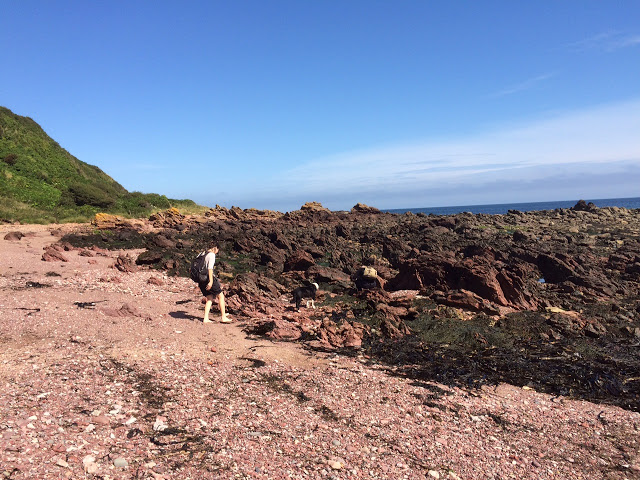 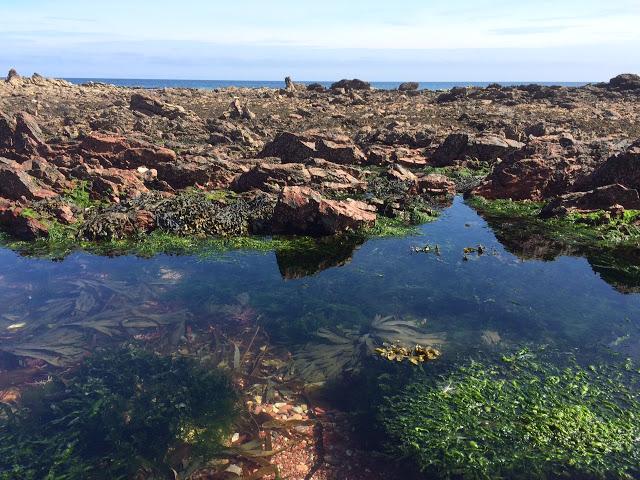 It wasn’t good for bare feet. Poppy replaced her boots. We were getting off to a slow start.
We walked along beaches and low cliffs and through fields. 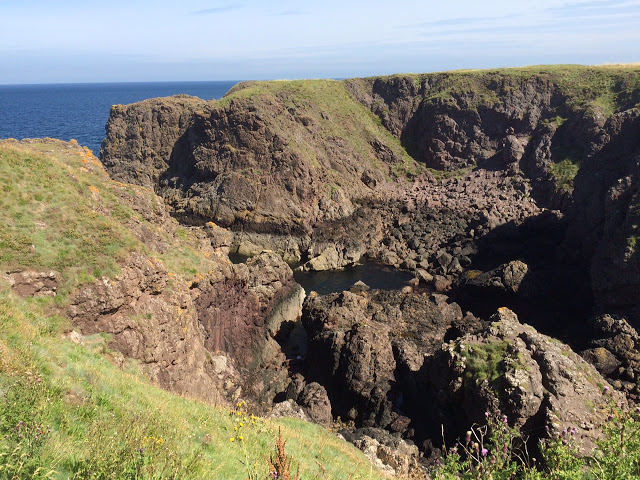 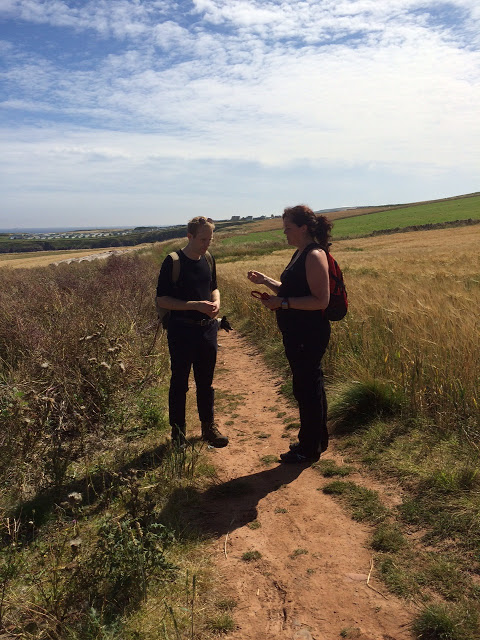 I told Mike that I used to take heads of wheat as a child and eat the grains, He tried it and was enamoured. Poppy tried it with a head of barley but it just wasn’t the same. She tried chewing the wheat and spitting it out, hoping she wasn’t setting up problems for herself. 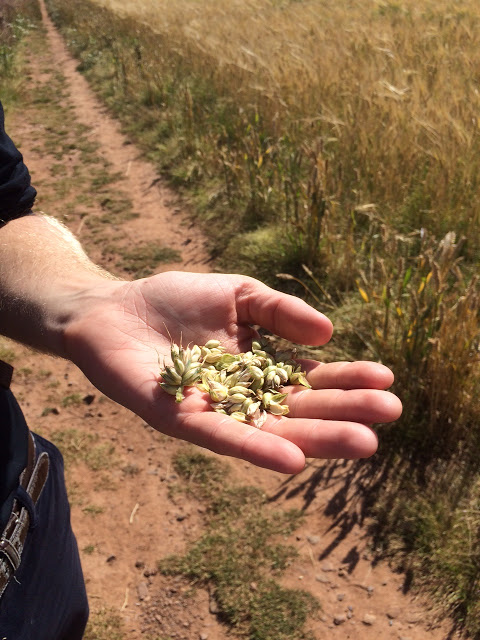 In Eyemouth we bought icecreams and had a closer look at the Herring Queens we’d spotted earlier from the bus. The town’s annual contest for the Queen of the fishing town began in 1939. All  the previous queens are on banners around the town. Here are a couple. 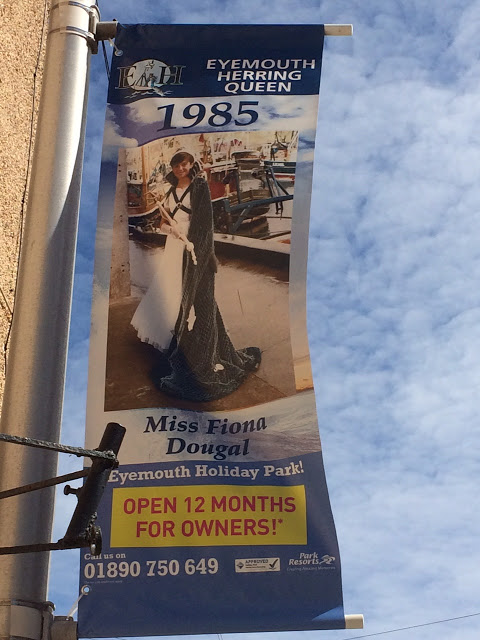 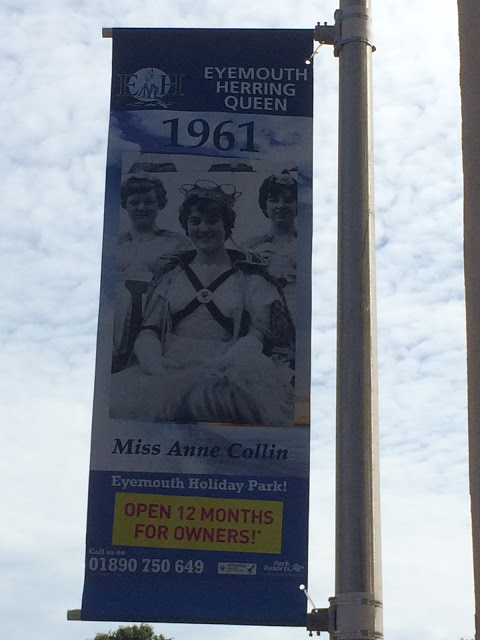 If you want to see more go to http://www.ehq.org.uk/category/past-herring-queens/
As we left the town we walked through the docks. Poppy and I felt strange walking around winches and lorries loading and unloading, as though we were trespassing. Mike said, they don’t just eat chips and ice cream, it’s an industry. It kind of made sense of the Herring Queen, that there was something here she needed to preside over and protect. It made it more than just a beauty contest. 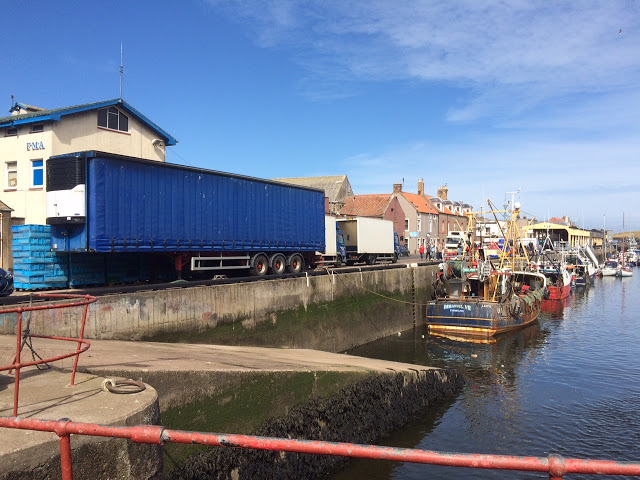 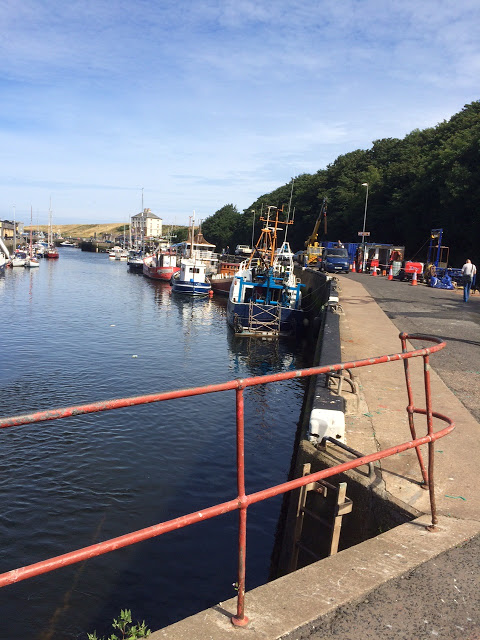 We walked over a golf course where the signs reminded us we were in Scotland. 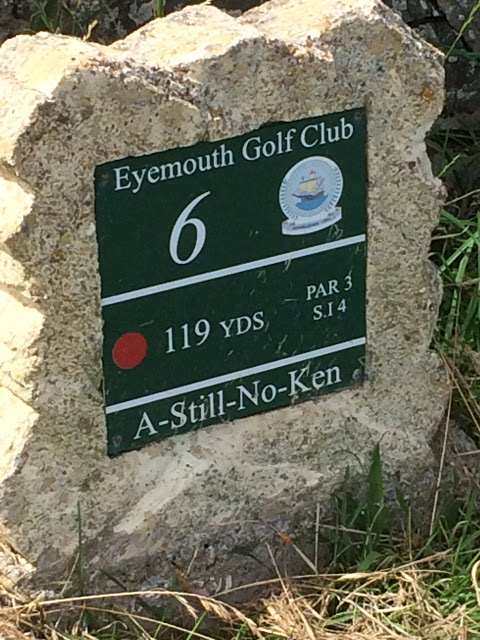 Then across the cliff tops until we reached Burnmouth Bay.

At the bottom of the hill down from Burnmouth the road goes two ways, one to Partanhall, the other
to Cowdrait. There’s nothing else down there and the road stops with these two villages. We thought about living here, what it would be like in winter. I think I would feel trapped. I wondered if Etheldreda took shelter in settlements like this. 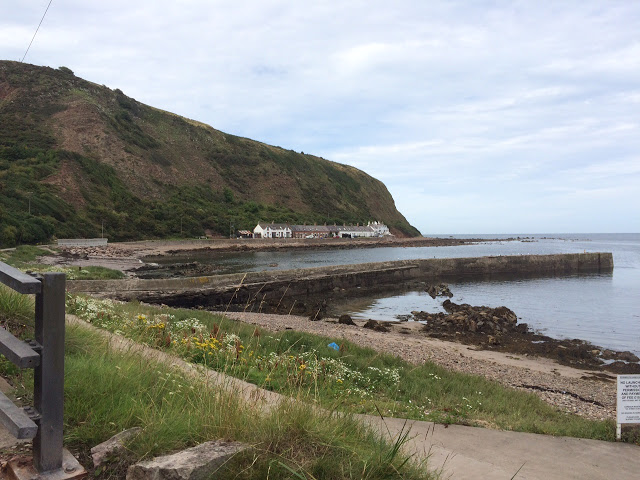 This is the town centre 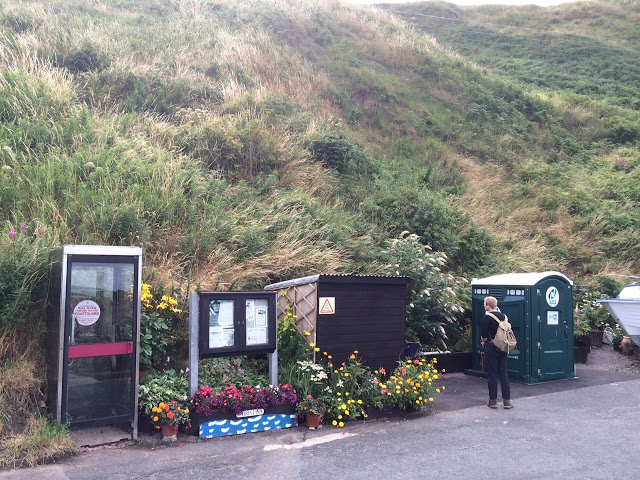 There was also a tiny sculpture of the women left behind after the Eyemouth Fishing Disaster of 1881 when 189 local fisherman lost their lives. 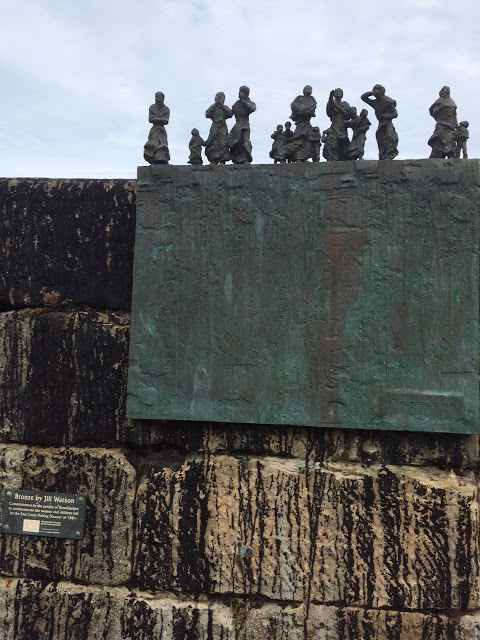 We stopped in Cowdrait for lunch, accompanied by swans. We were halfway and we’d taken four hours. We needed to speed up. 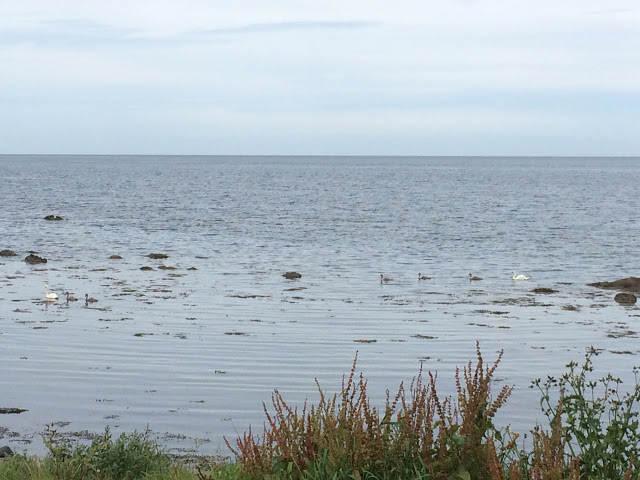 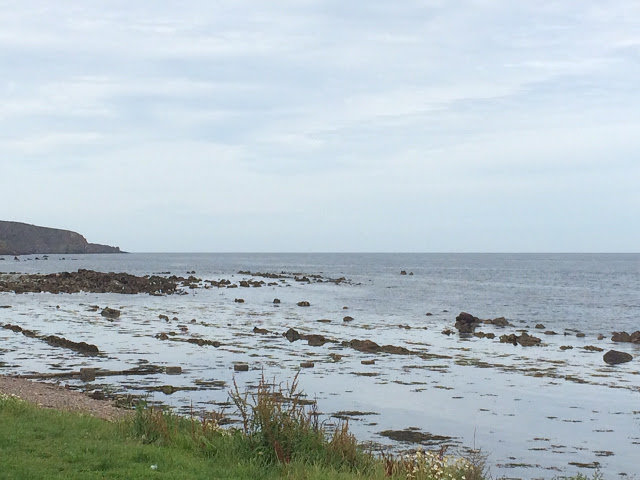 The next stretch followed the railway line, and much of it was along cliff tops necessitating single file. We got into a good stride. 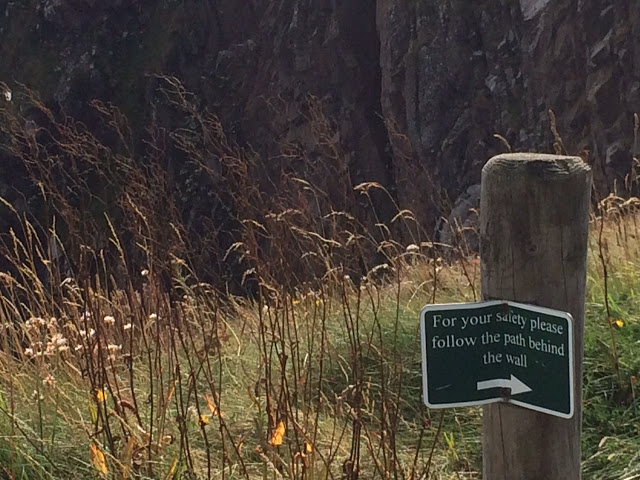 There were beautiful views. 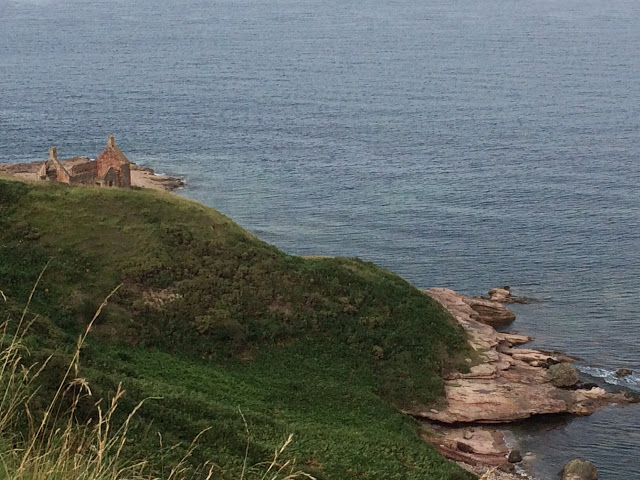 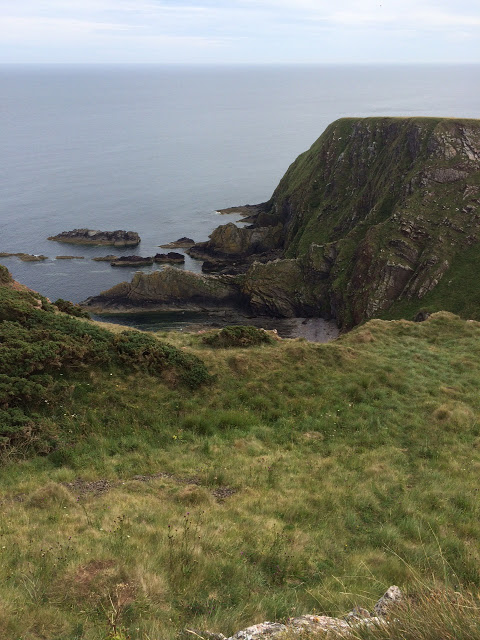 When we reached the border there was no welcome to England sign, but this on the other side of the fence. 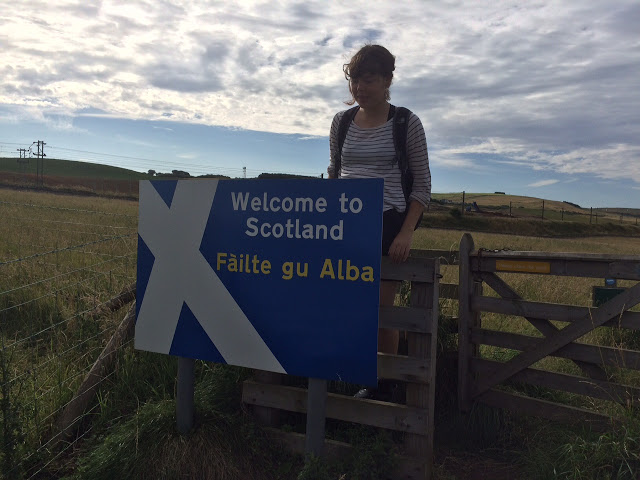 I think somebody should do something about that.
By the time we reached Marshall Meadows we were flagging. 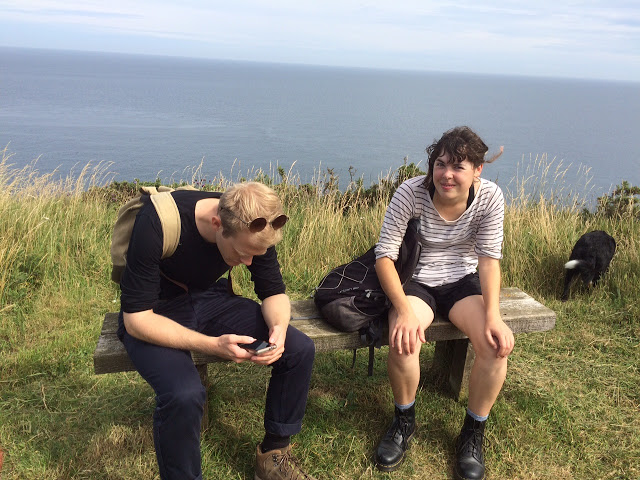 We were low on water. Poppy decided not to walk in DMs again as she was finding them too heavy. Mike said his feet hurt a bit. I wondered if he was being polite.

The paths were neatly mown here, and we met some goats. 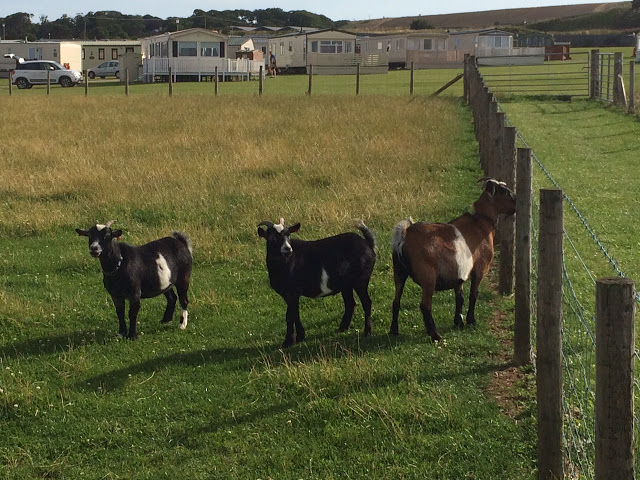 See that caravan site in back ground? Well, as we walked through it we saw an outside tap and decided to fill our water bottles. I filled mine first; a tin bottle decorated with a penguin book design. I took a long drink as Mike filled his clear plastic bottle from the tap. Eughh! he said as I lowered my bottle, what’s that? The water in his bottle was swarming with earwigs. I looked into mine, and there they were – loads of them swimming about. We emptied them and the water onto the grass and I tried to remember if I’d felt anything in my mouth or throat as I swallowed. I’m sure I would have noticed. Wouldn’t I?
I’d just drunk from an earwig infested bottle. Now we had no water. Was this the right impression to be making on my daughter’s boyfriend at our first meeting?
Luckily it was not much further. We were too hot and tired to talk much, but we carried on past caves and natural arches… 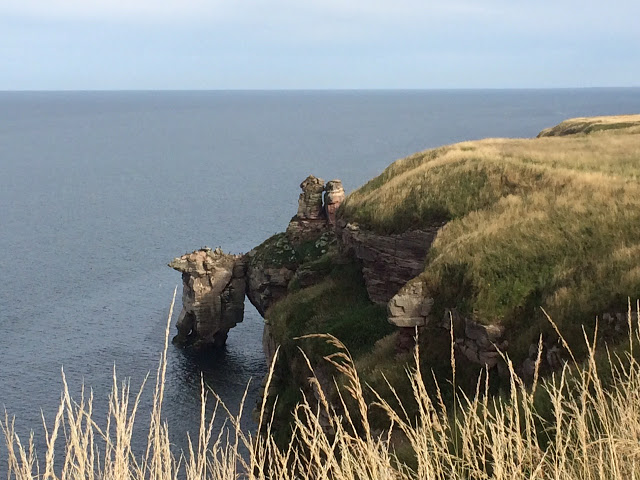 … across another golf course and back into Berwick upon Tweed. We’d done the second half in half the
time.
14.7 miles
0 comments… add one