Today can probably best be summed up with pictures. 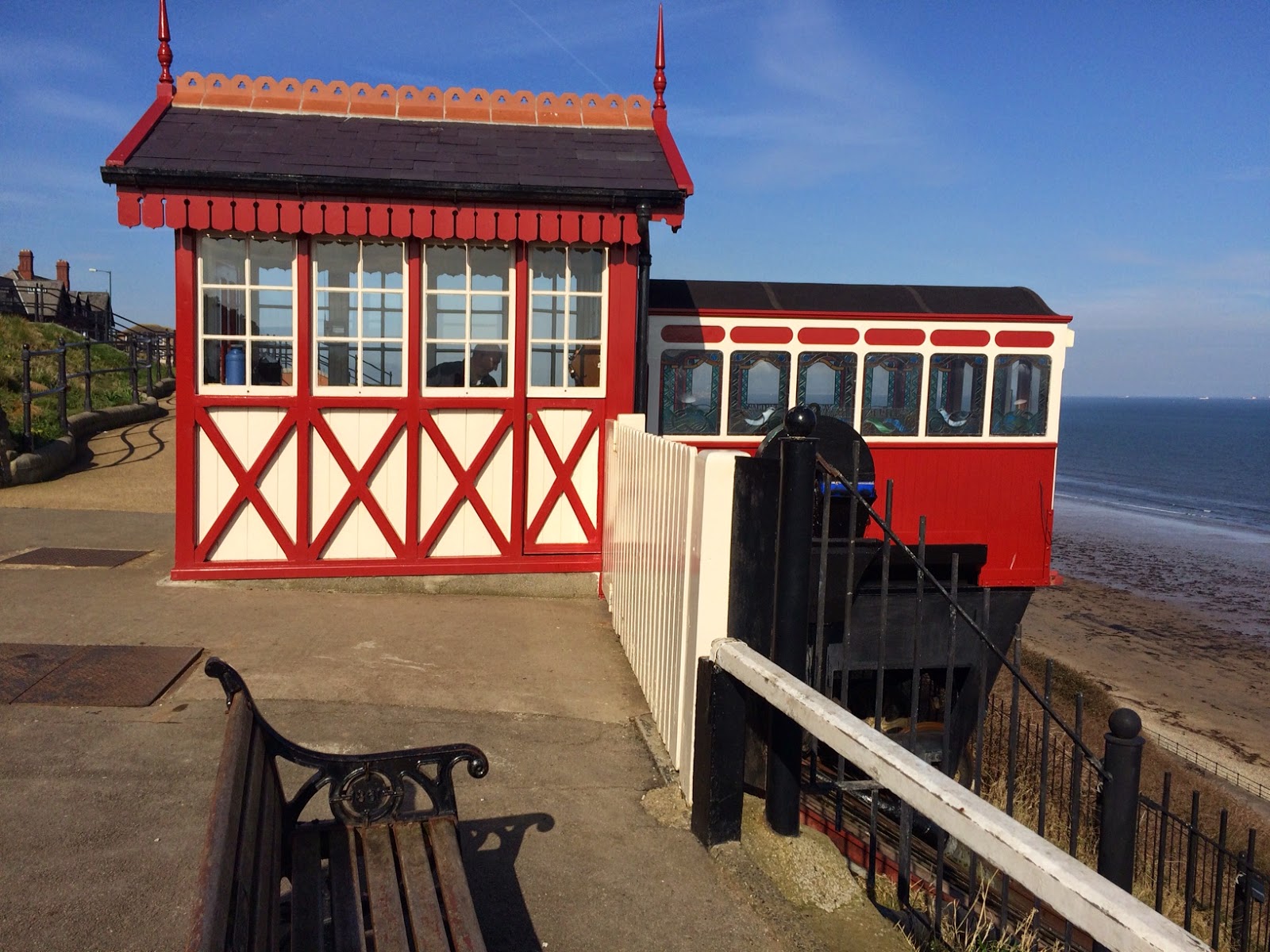 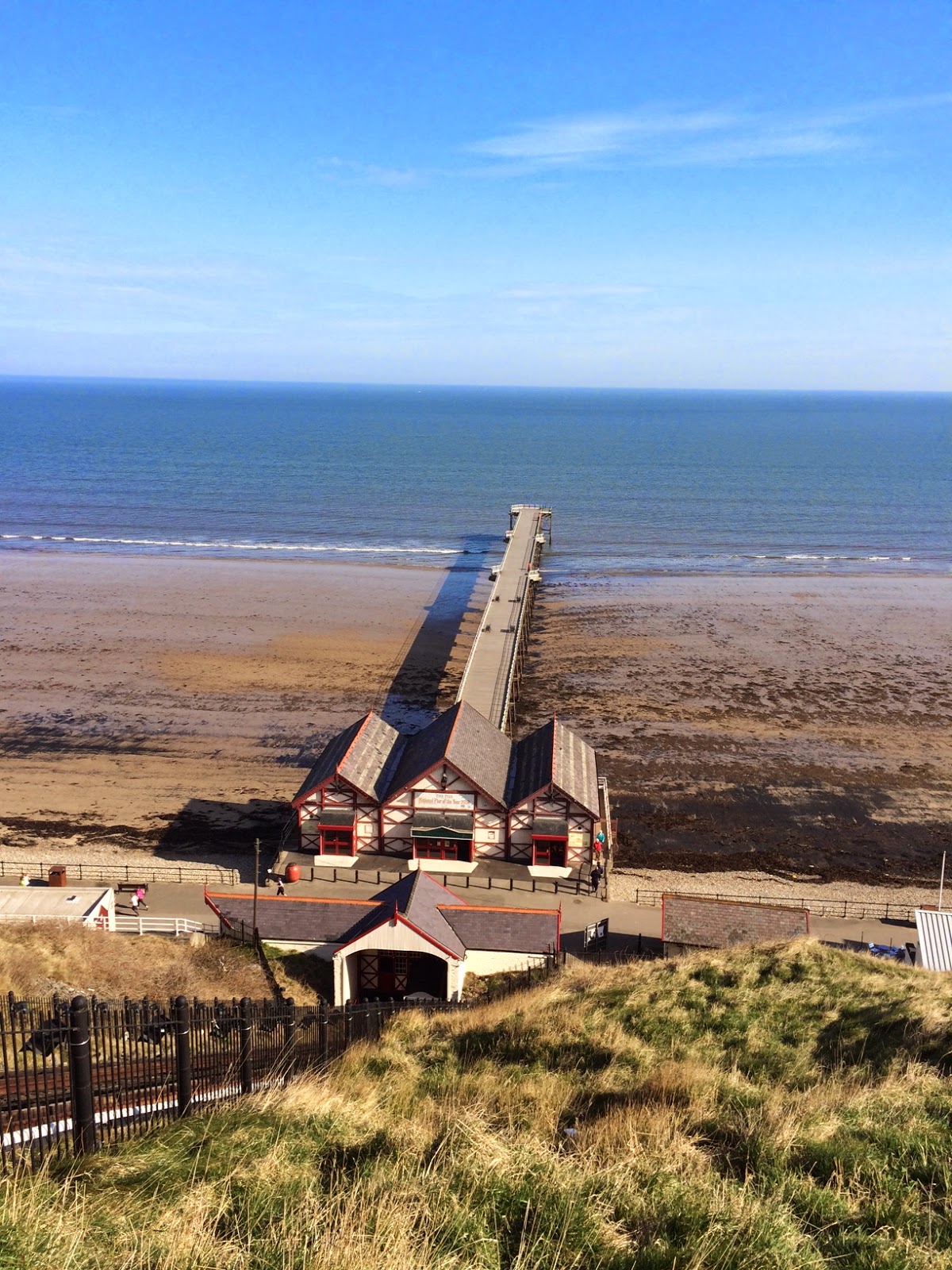 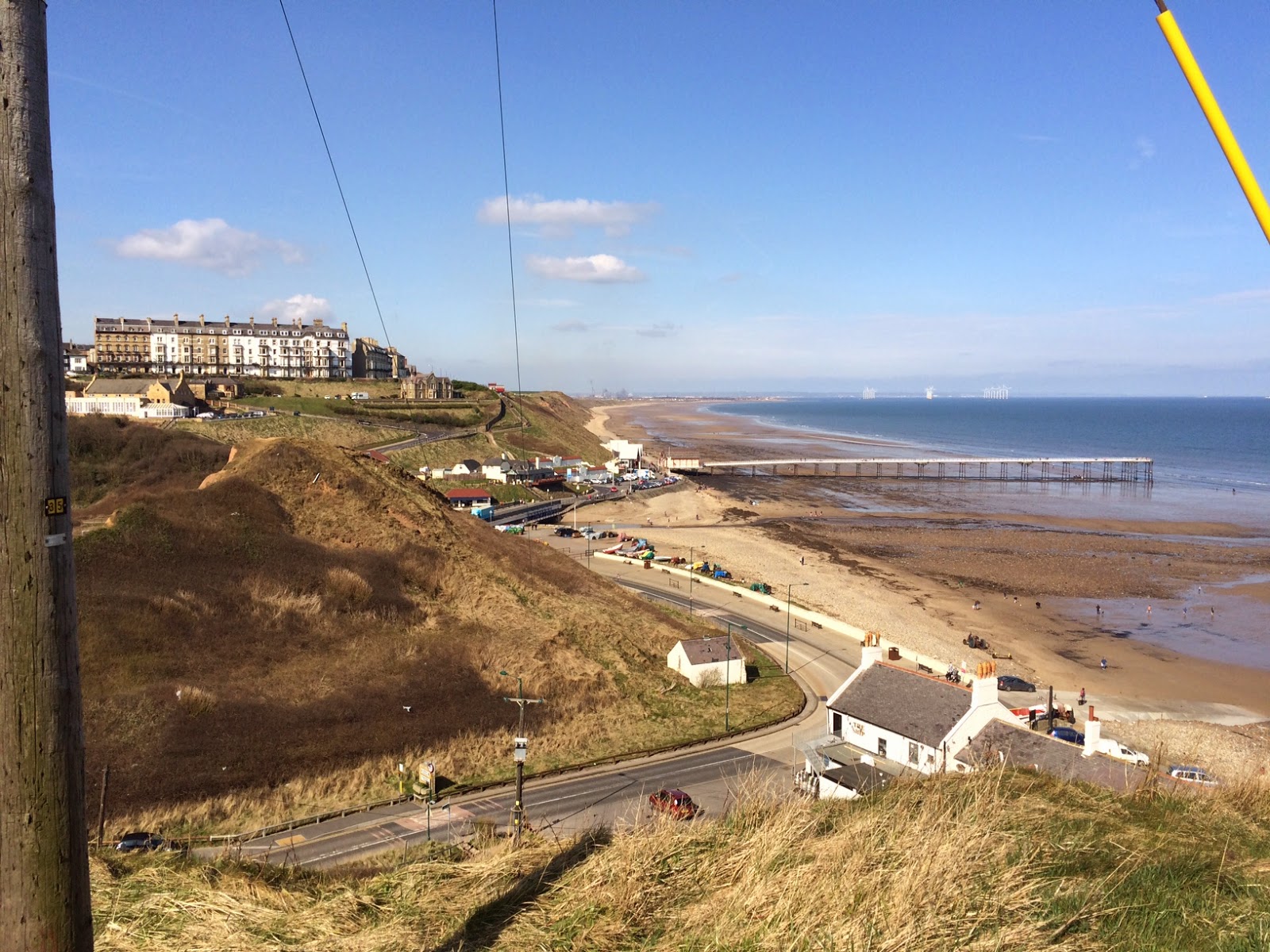 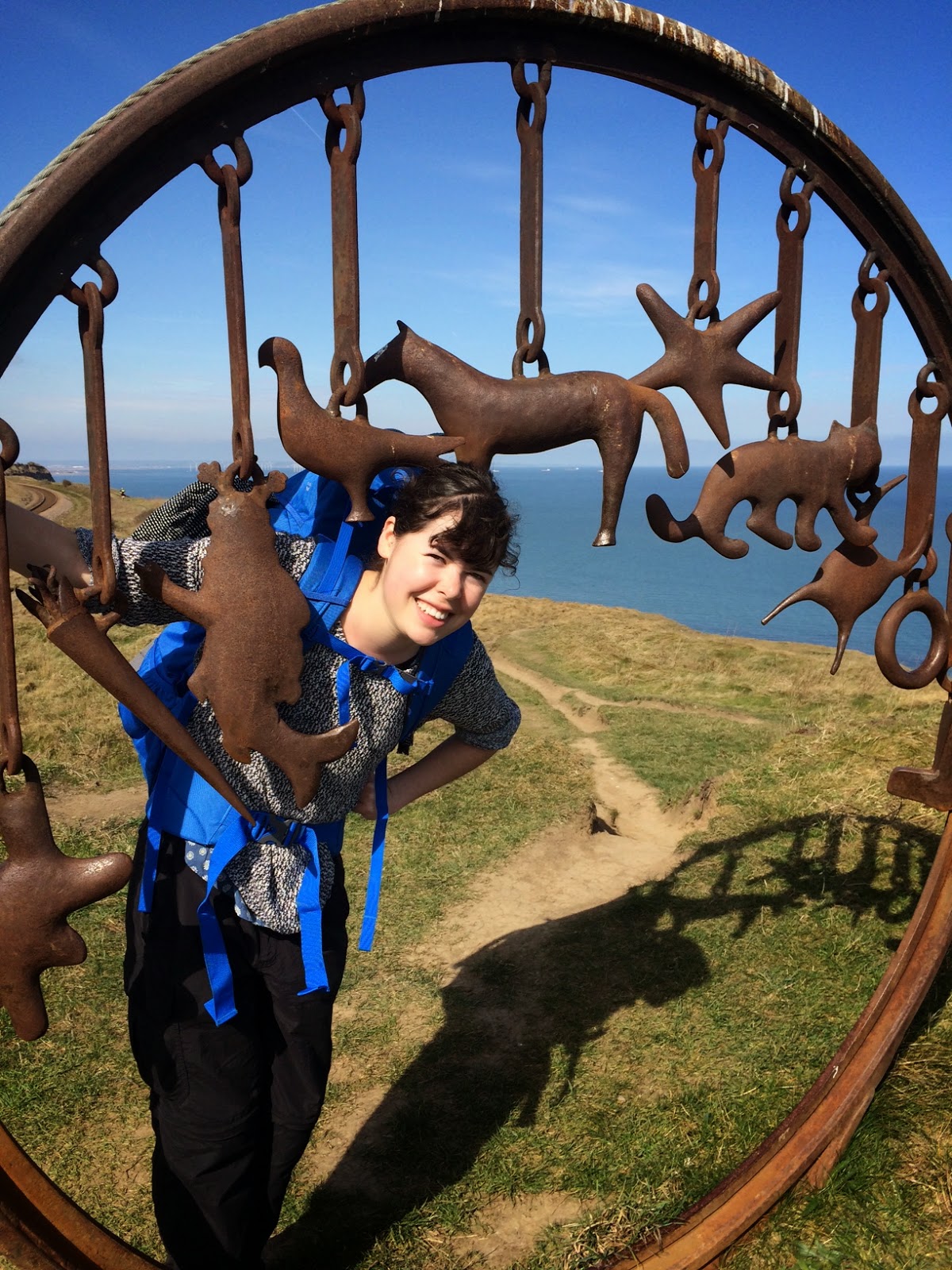 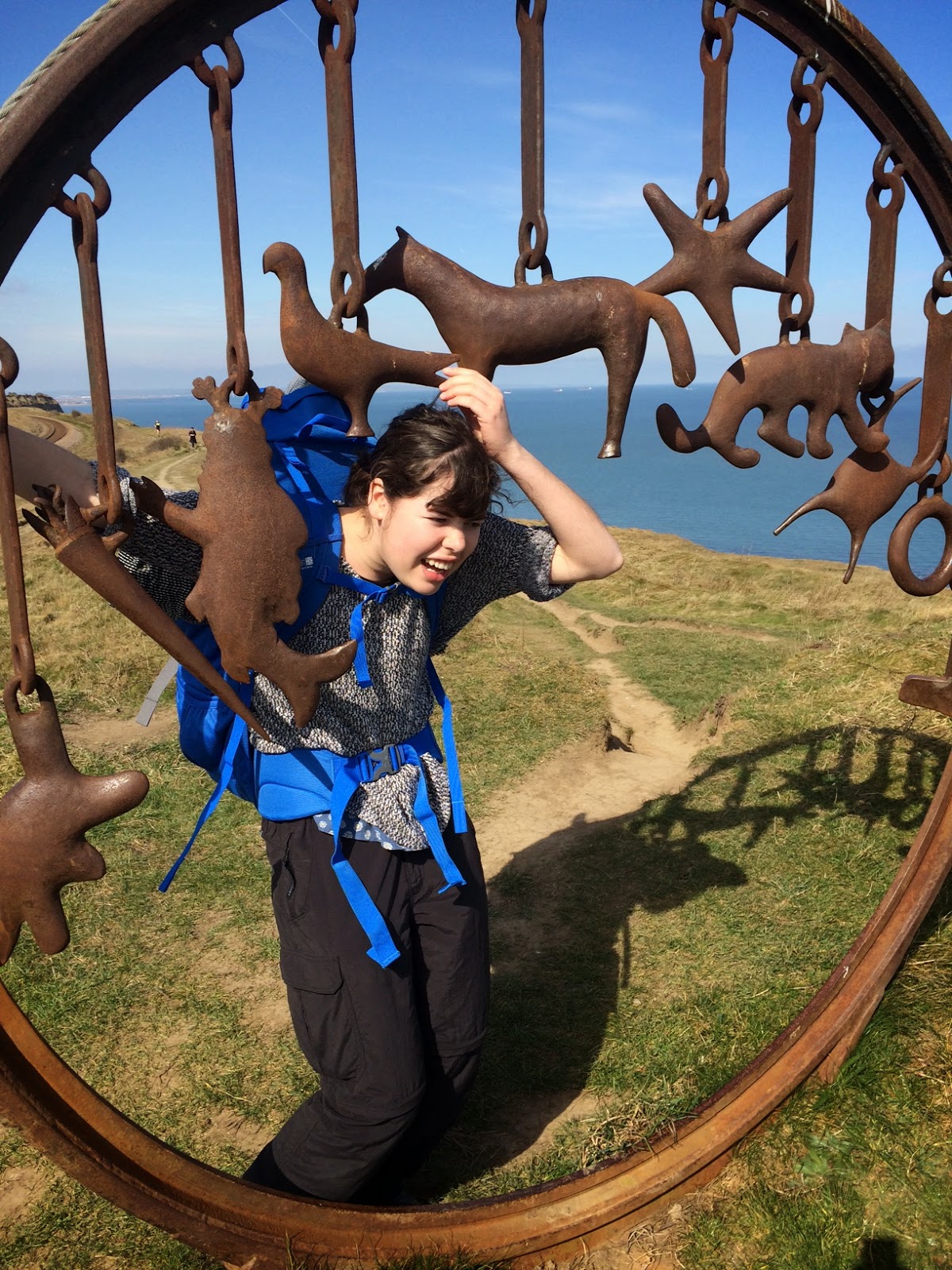 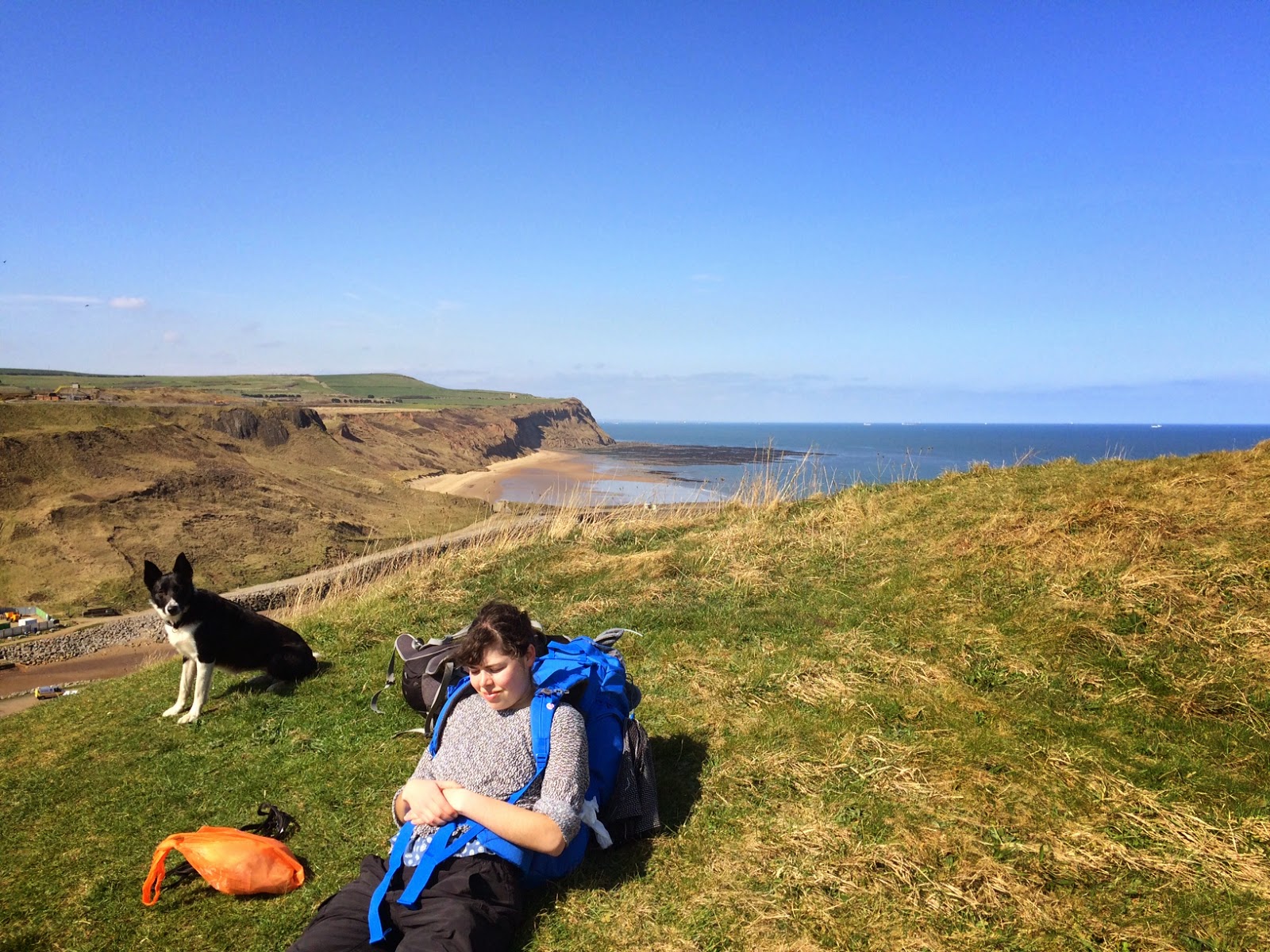 The sun shone and the day was beautiful. The sea was blue and calm, a vast expanse always there on our left, simultaneously calming and terrifying, beautiful and completely other.

We left the Saltburn Spa Hotel, haven of white sheets and carpeted corridors which smelled of shampoo
and massage oil, and set off up the first steep hill of the day. There weren’t too many hills – we only came down to sea level twice – but they were certainly hard work.
The path then followed the cliff tops at varying degrees of scariness from the edge. At one point  early on we had the railway line on our right and a steep drop immediately on our left – between the devil and – literally – the deep blue sea. The dog had the wind up her tail this morning and wanted to run back and forth, leaping up at us and generally behaving like a puppy – which would have been fine if we hadn’t been teetering on the edge of a precipice.
Later we found a nice spot for her to sit and pretend she was in Pirates of the Caribbean with her own
bottle of rum (OK, Koppaberg). 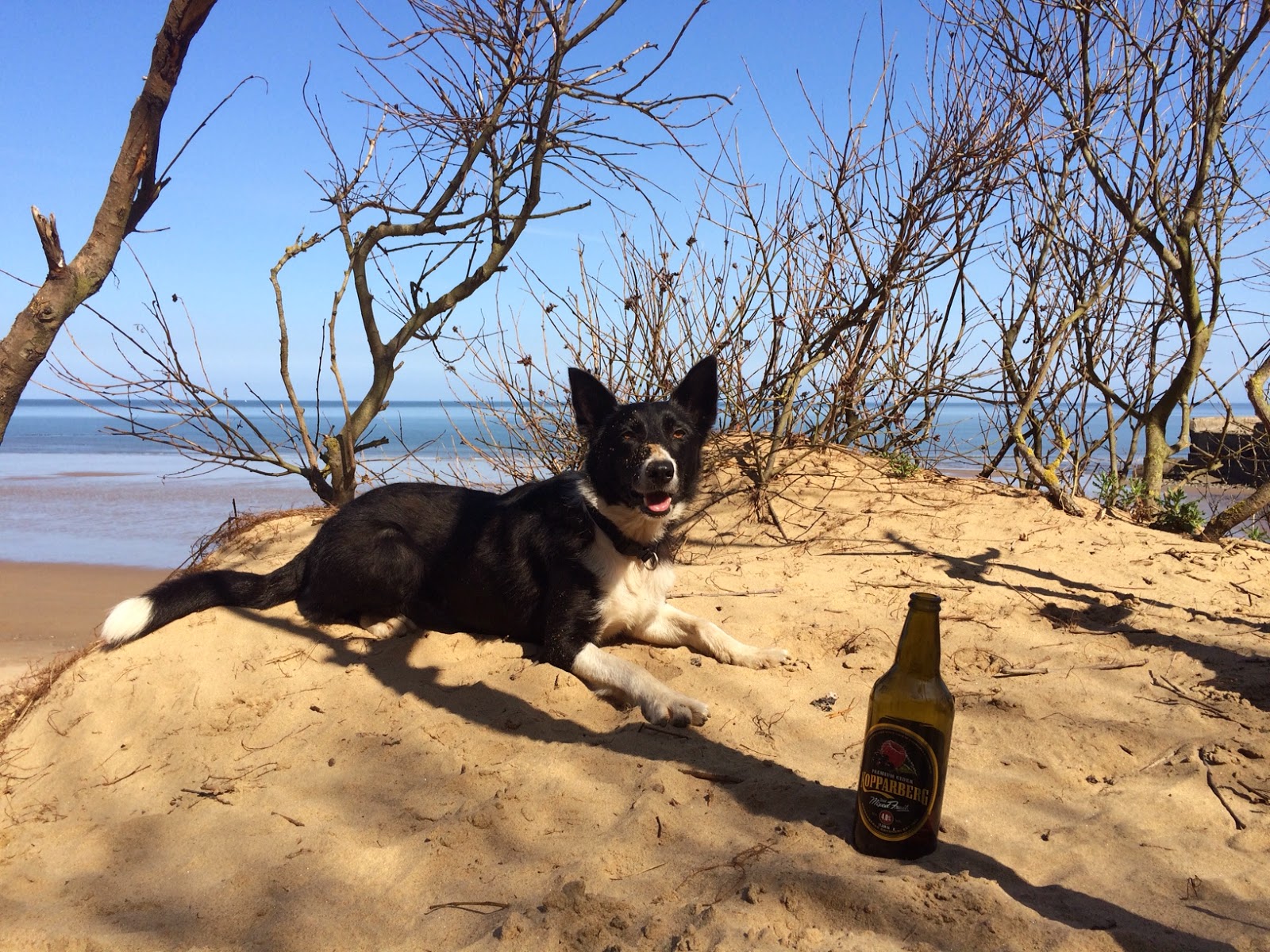 We went through Skinningrove – Valley of Iron, where there were a profusion of makeshift huts, building works, and ponies up on the hillside. We sat for a few moments on an iron bench grafted onto the hillside, before beginning another steep climb. 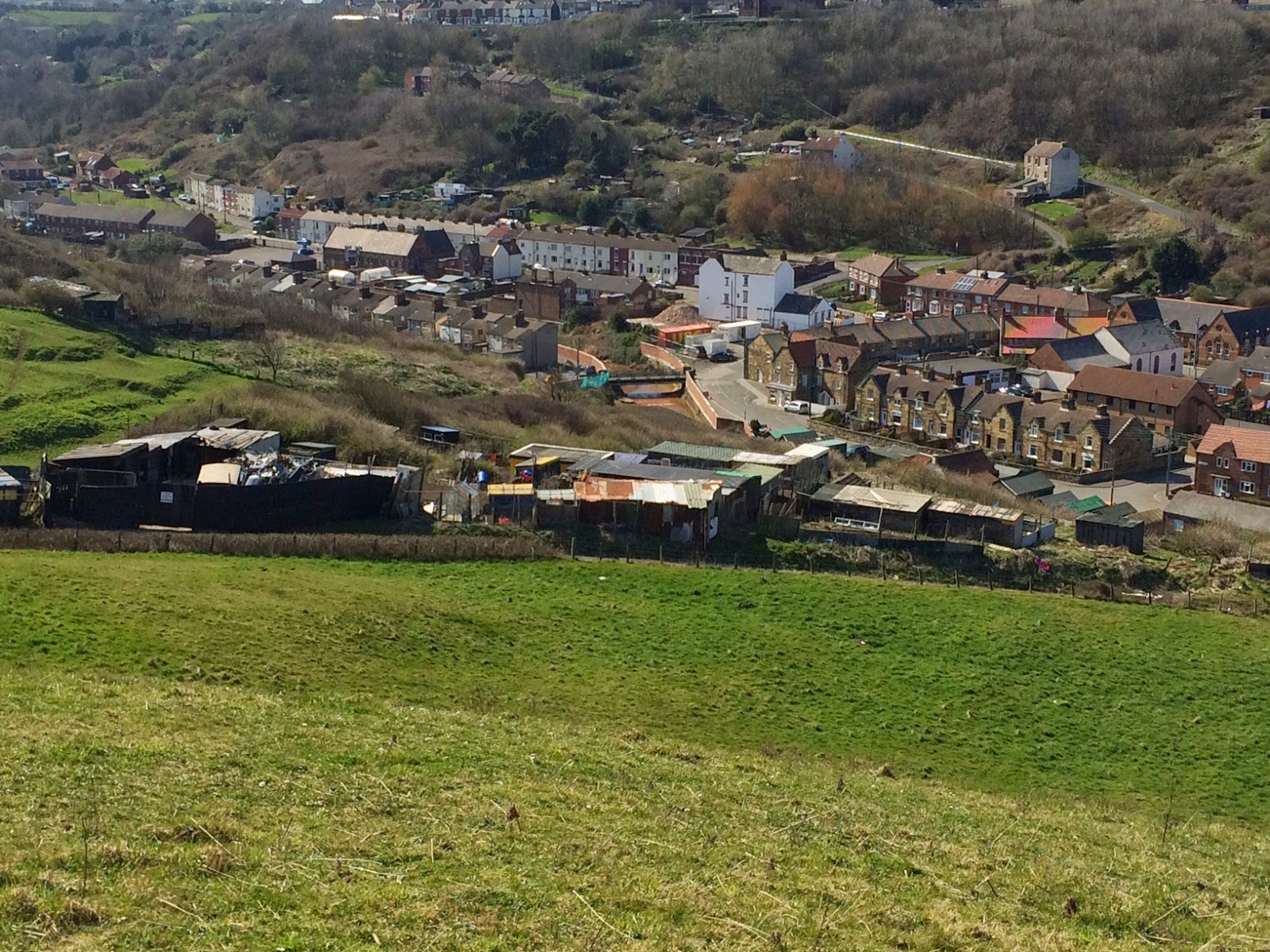 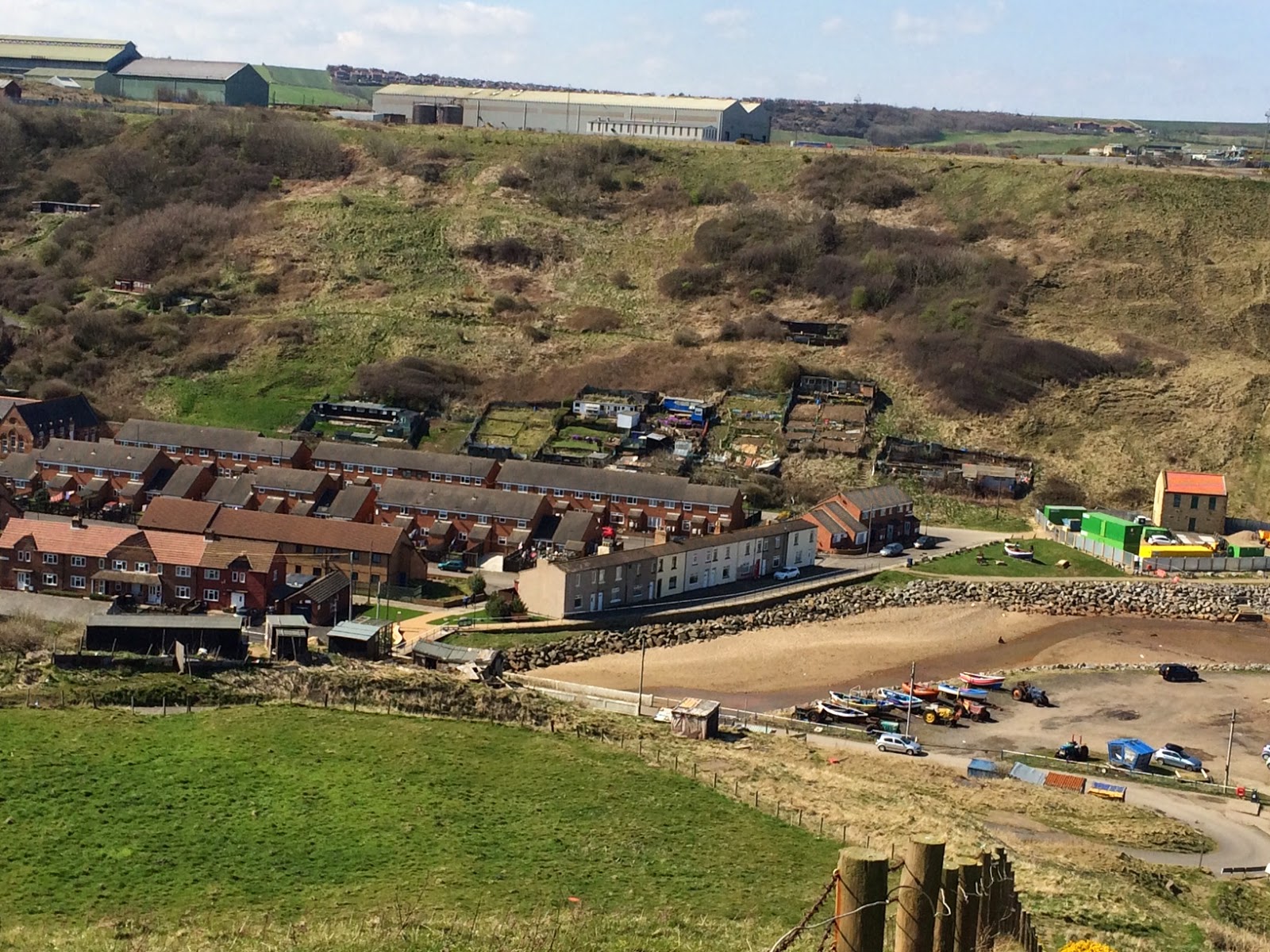 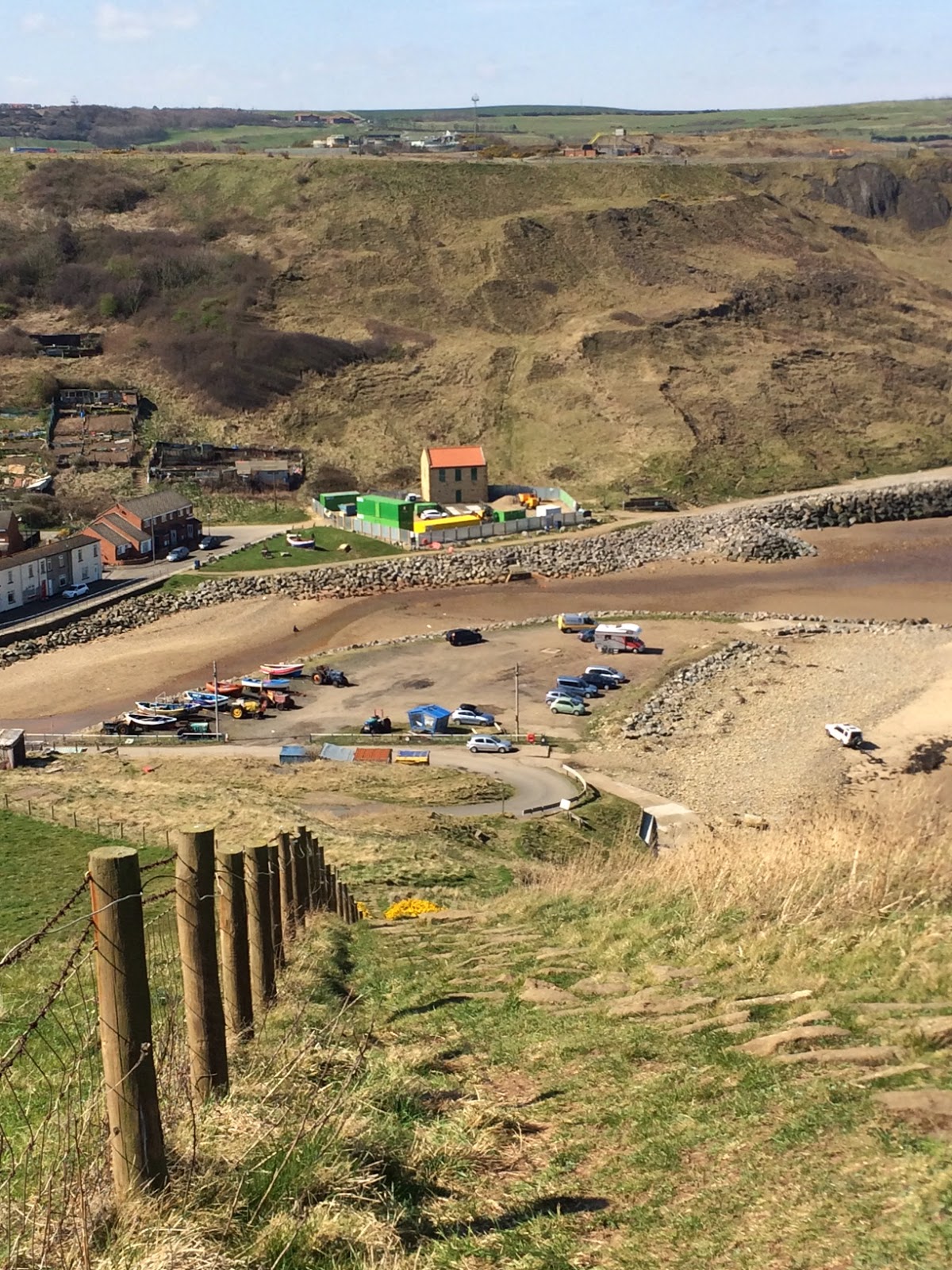 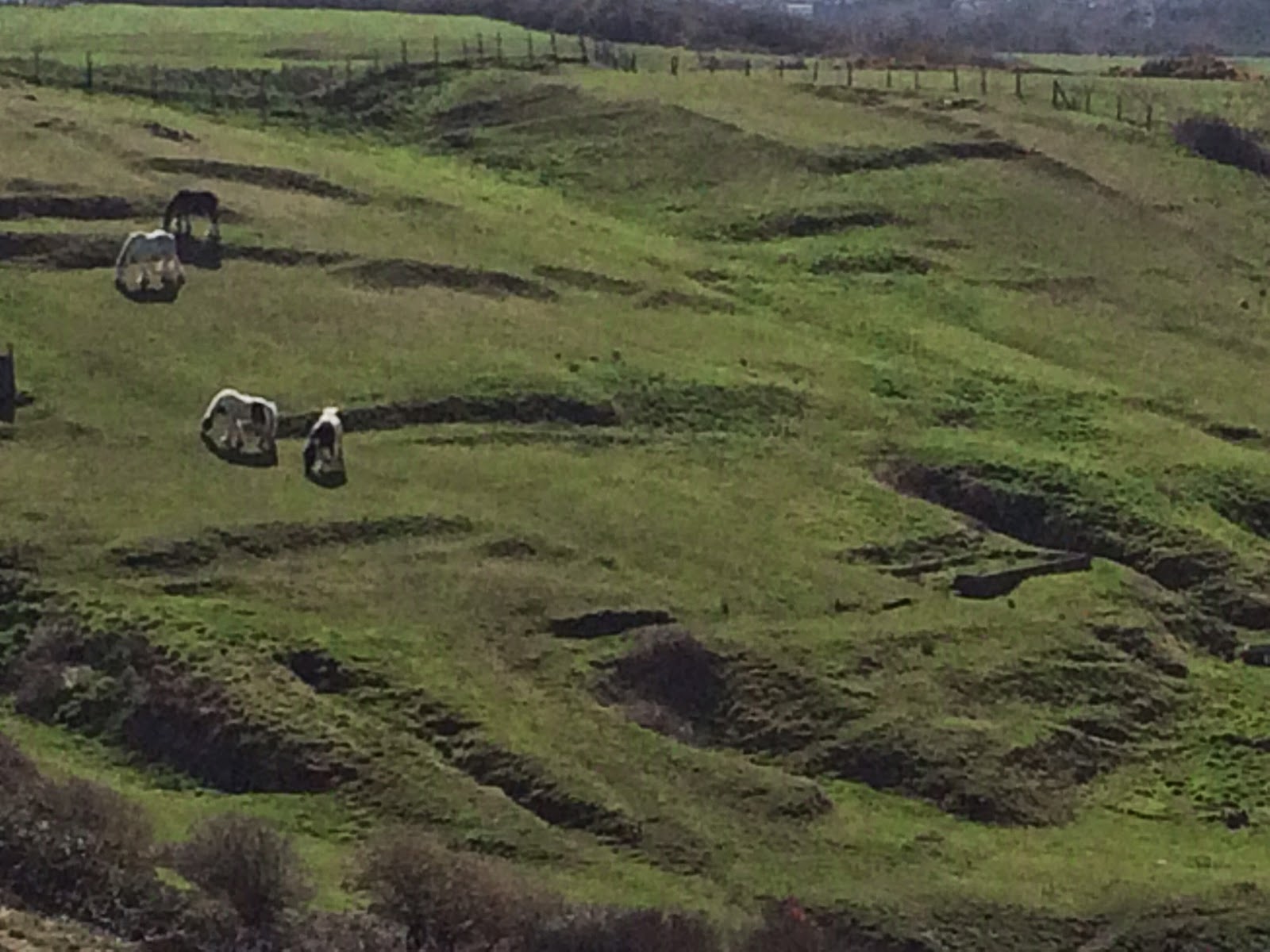 Today I was tired, my legs and feet aching, but I could imagine another leaner, fitter me emerging. That I could walk myself out of the extra layer of flab that I’ve allowed to develop. Yesterday I could not imagine this. I like to think it’s a vision of the future. 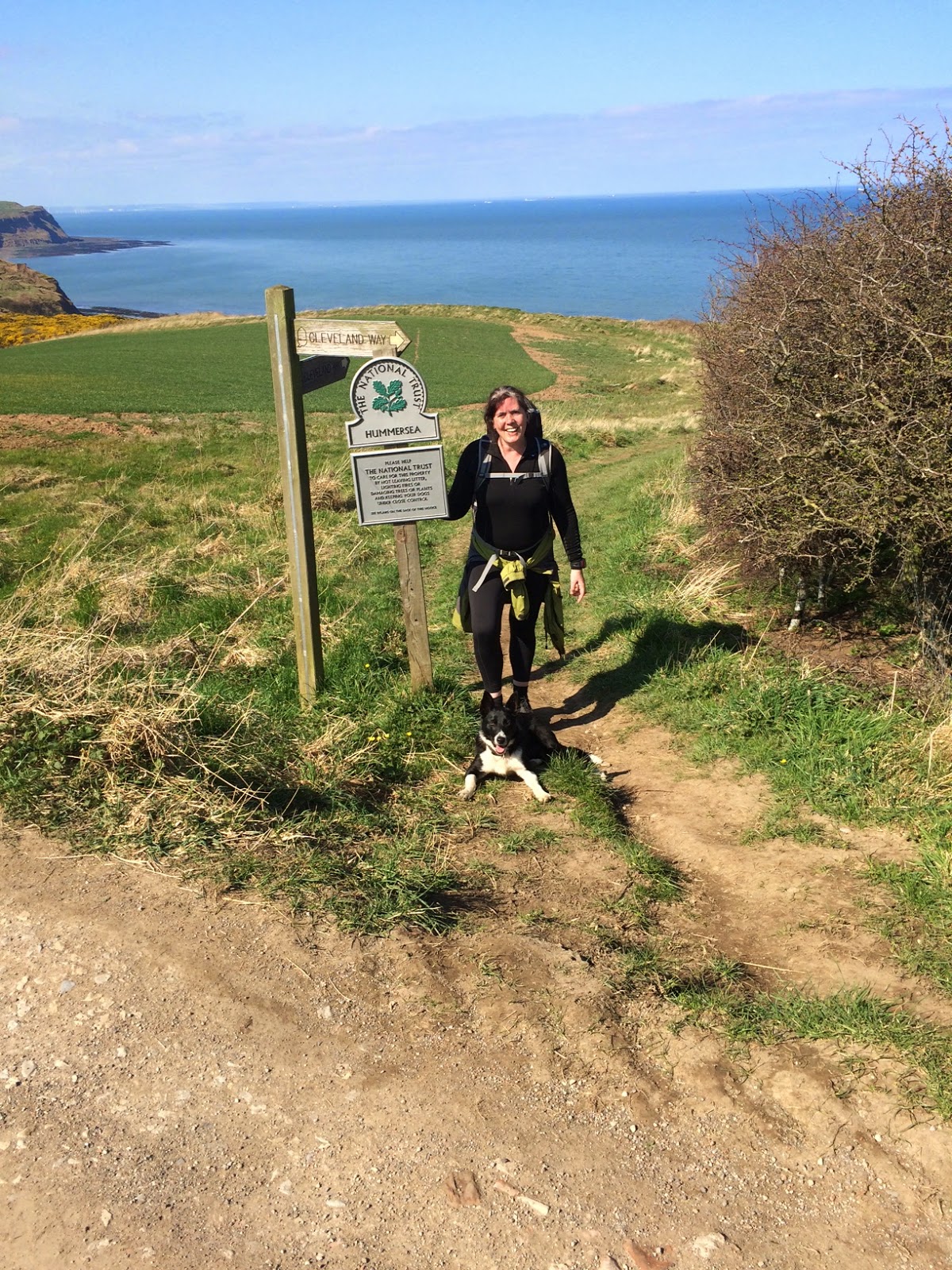 At Boulby we found ourselves on the highest bit of cliff on the east coast of England at 666ft above sea level. At some point in the past it had seemed expedient to quarry into this bit of headland, so there are huge holes in it as if it’s been bitten into by massive sea monsters. The path meanders its precarious way along the edge, sometimes only a couple of feet away, and it looks as though the rock face is crumbling. We reassured ourselves that someone would keep an eye on the path, would divert it if it wasn’t safe, that we weren’t about to fall to our deaths in a rock fall. Poppy peered over which made me feel sick. If I could I would have walked with my eyes closed. 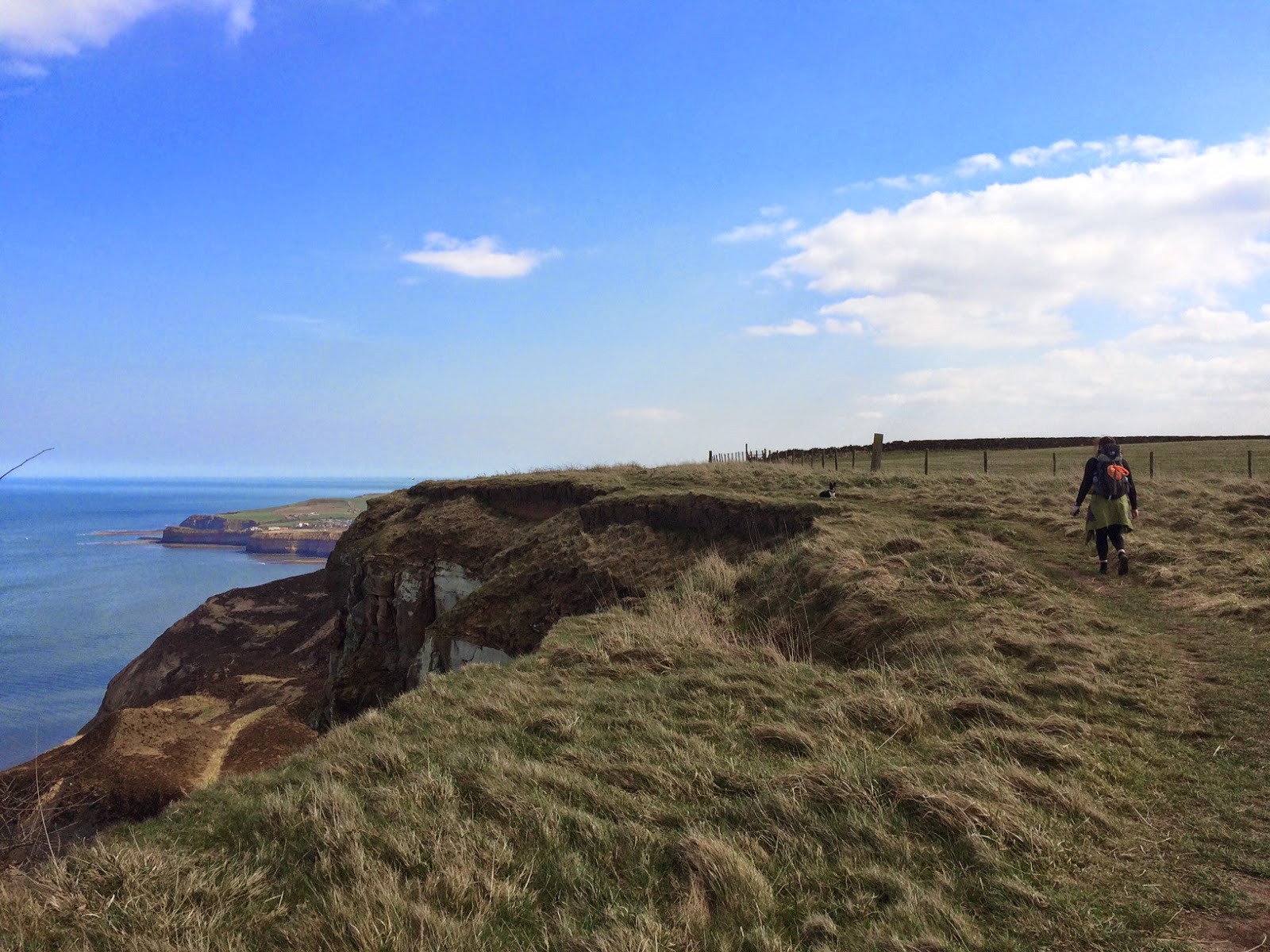 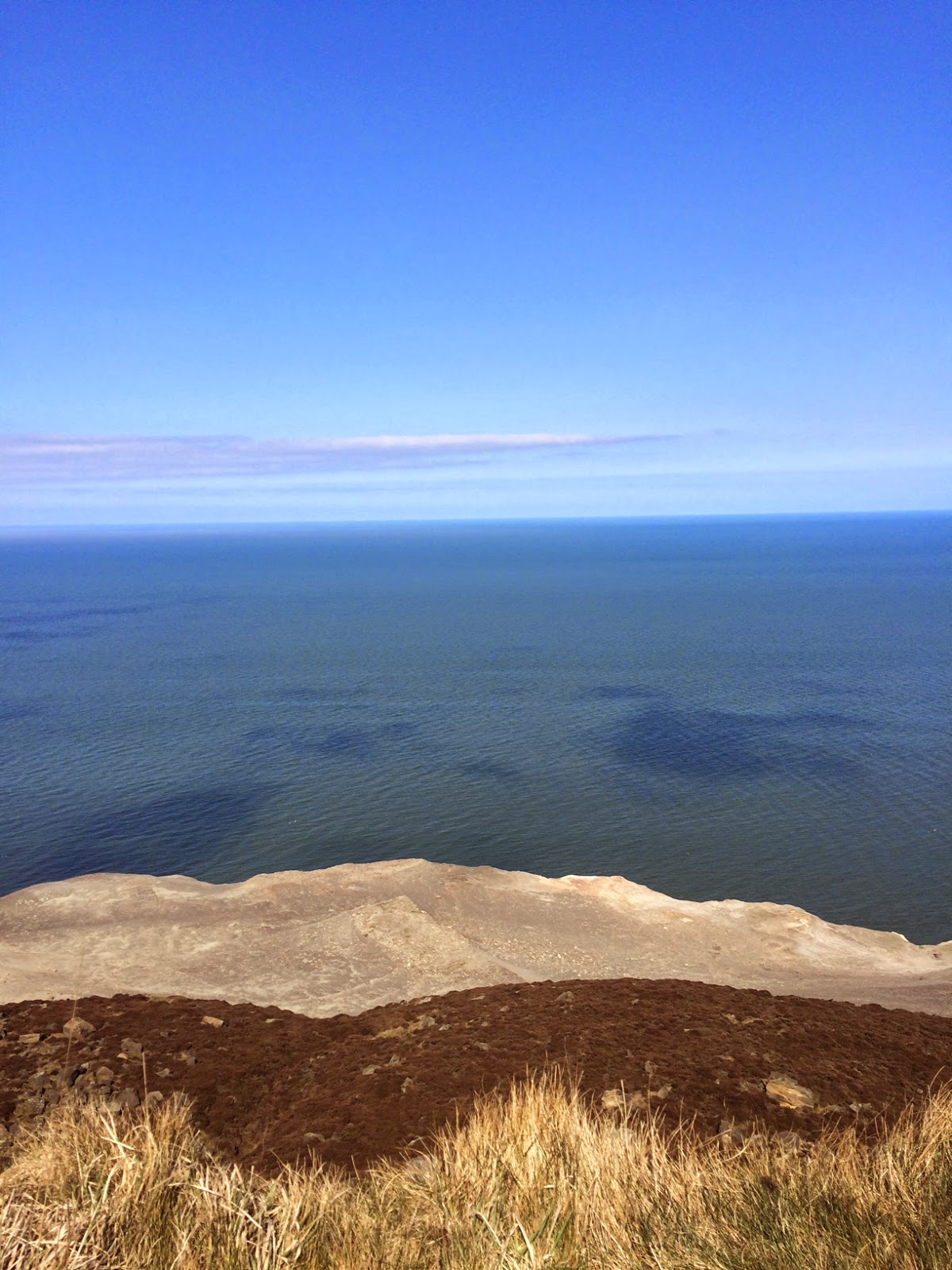 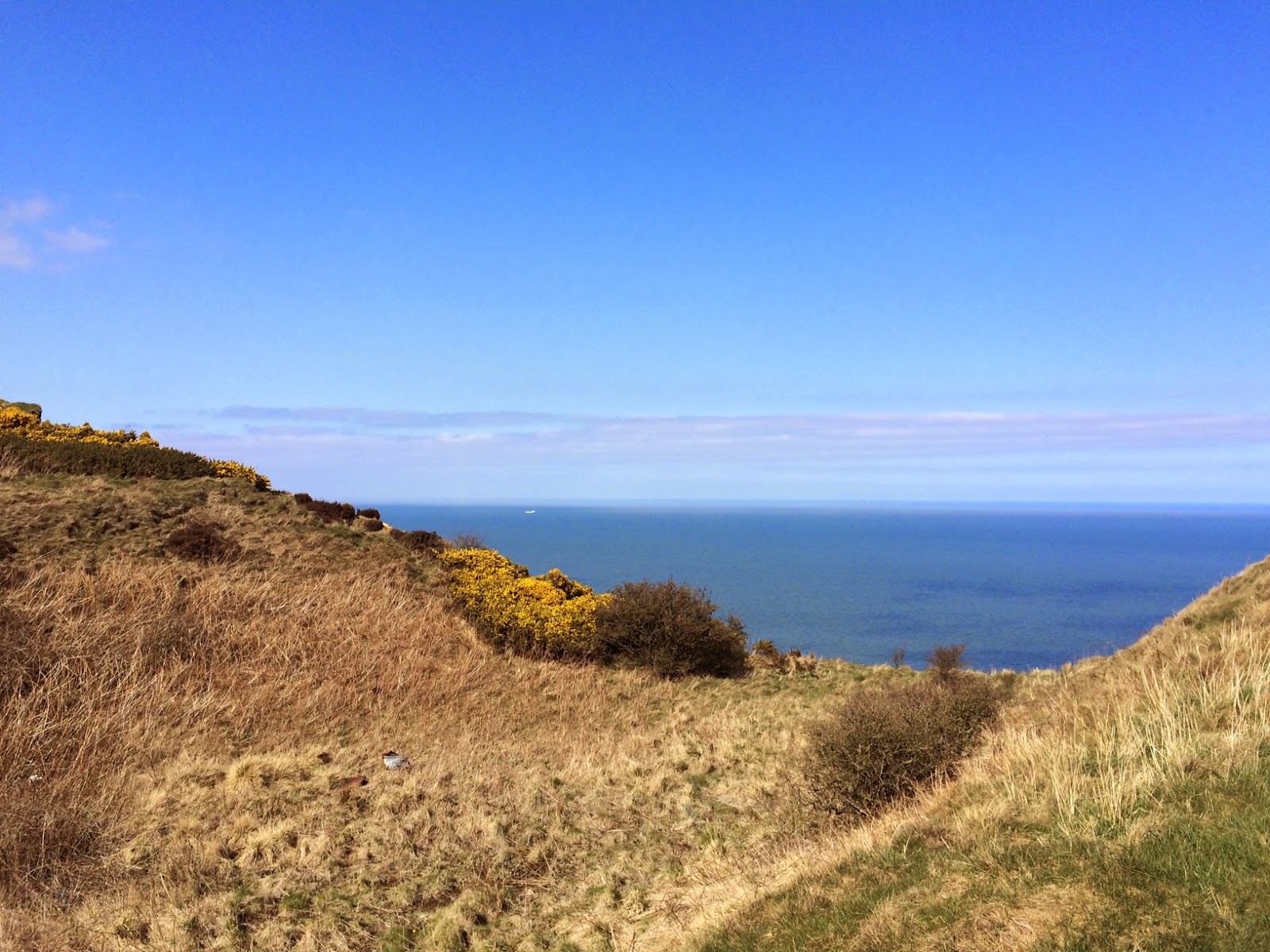 And then we met a little dog, a beagle, wandering all alone. Poppy was convinced that its owner had fallen. She thought it looked confused. But no one was calling for help, and the dog wandered on, and even if it was confused, it didn’t seem distressed.

We were planning to find food in Staithes, but we were too late for lunch in the pub, so we had to make do with pork scratchings and chocolate. Poppy was not impressed and I sensed a mutiny.

Luckily we only had three more miles to go, and we happened upon the Runswick Bay Hotel sooner that we expected. Poppy has now been fed, but I am wondering if she has fallen asleep in the bath. 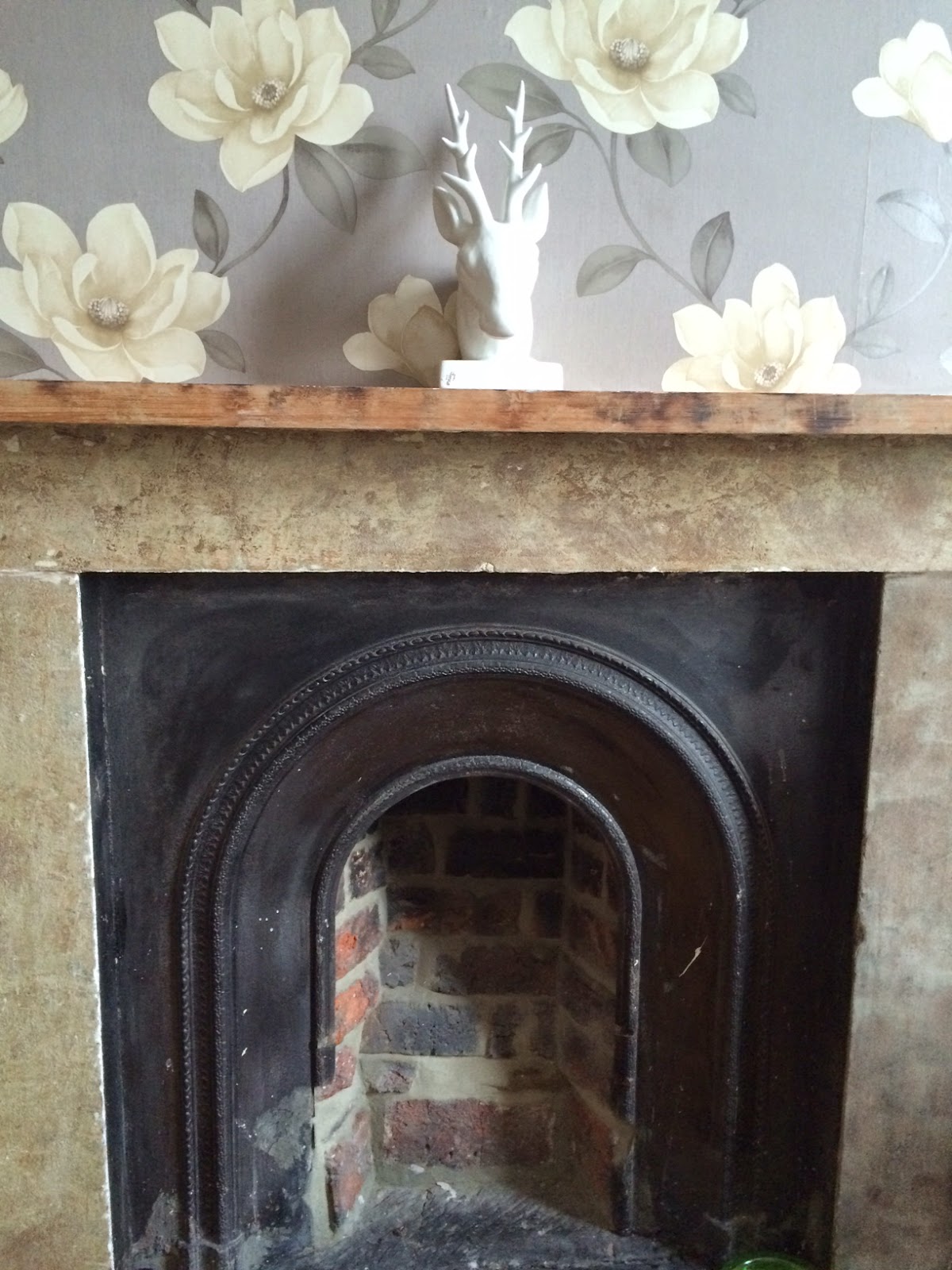 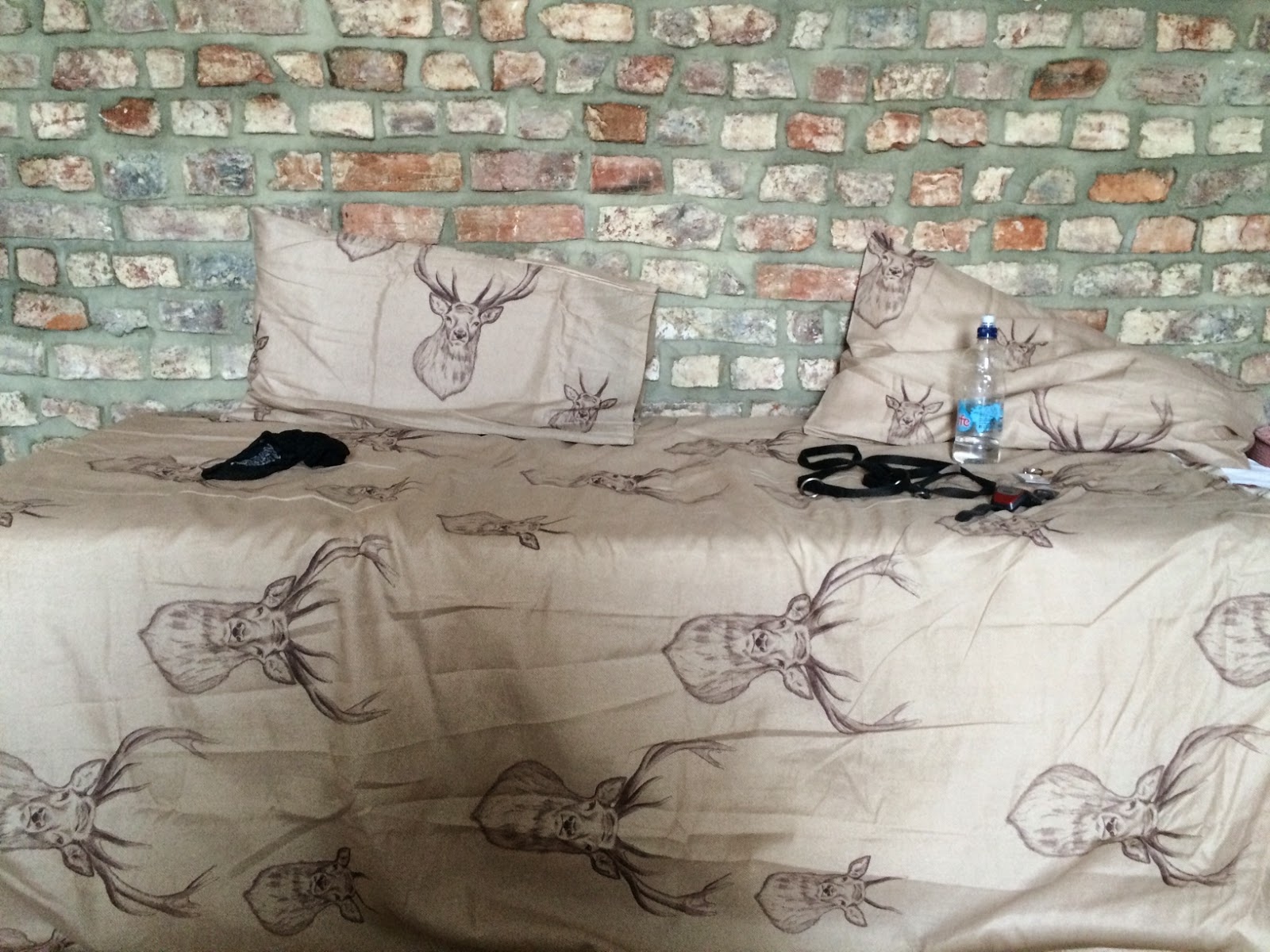