Betty finally got to play in the sea! 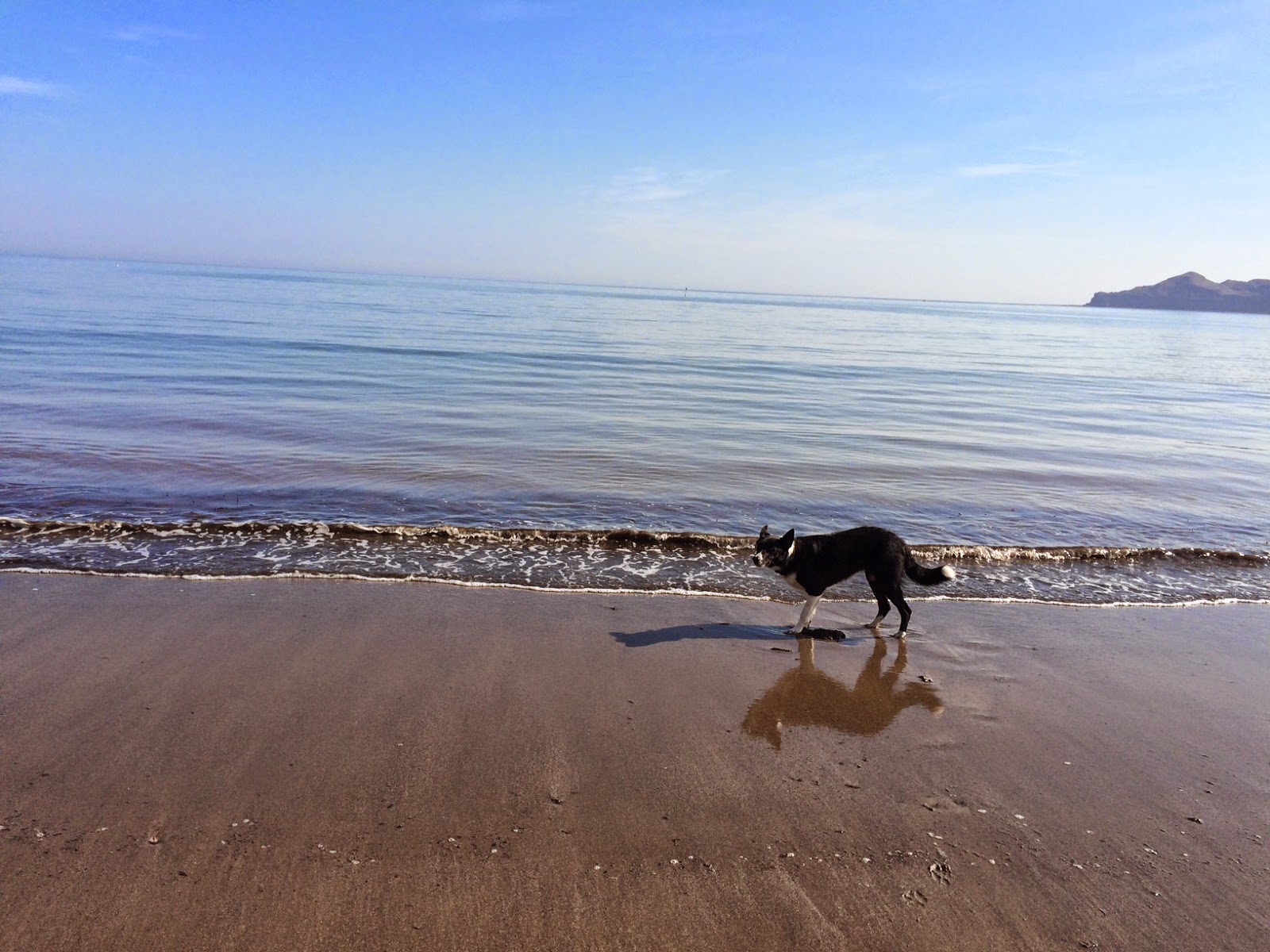 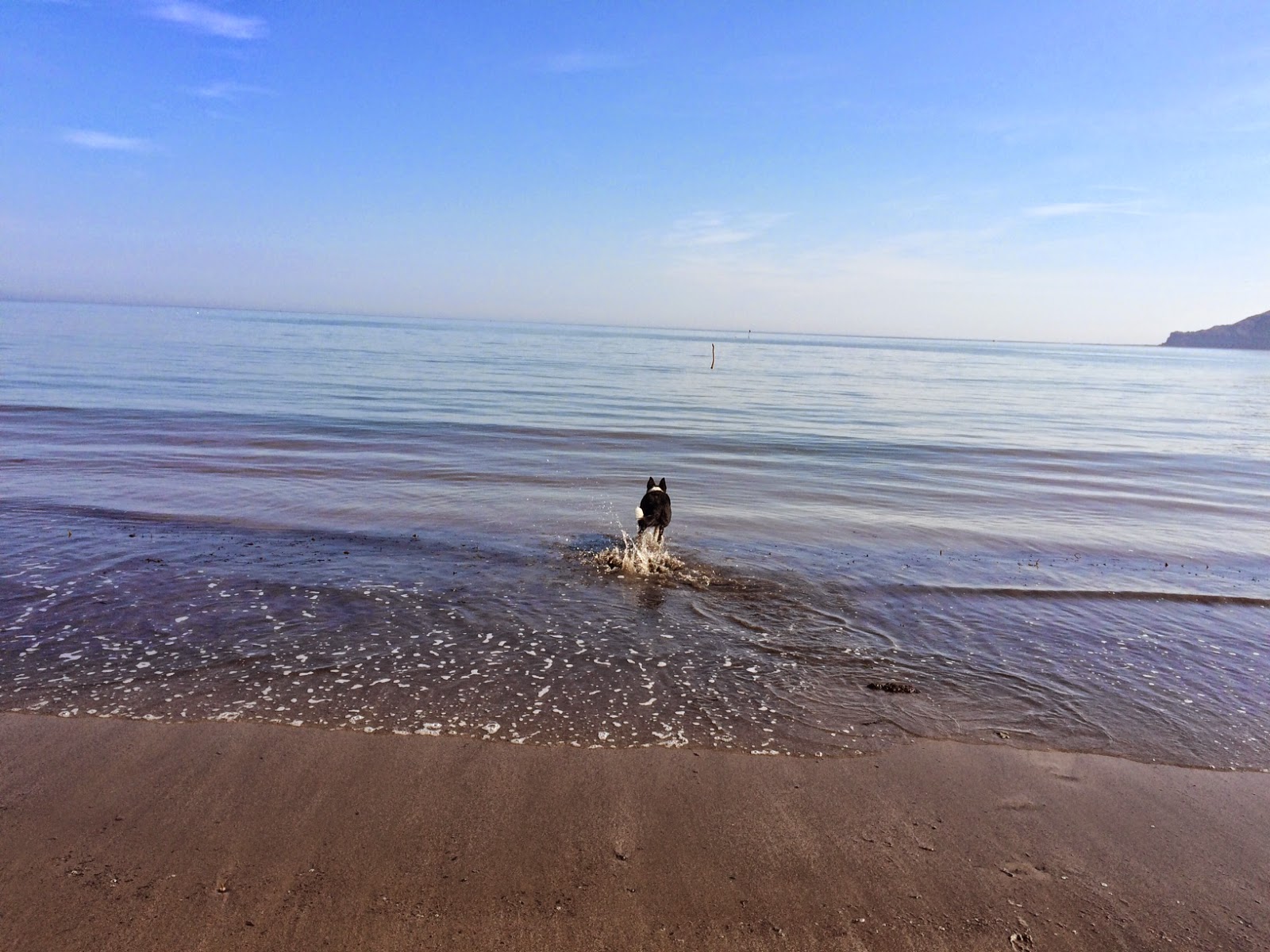 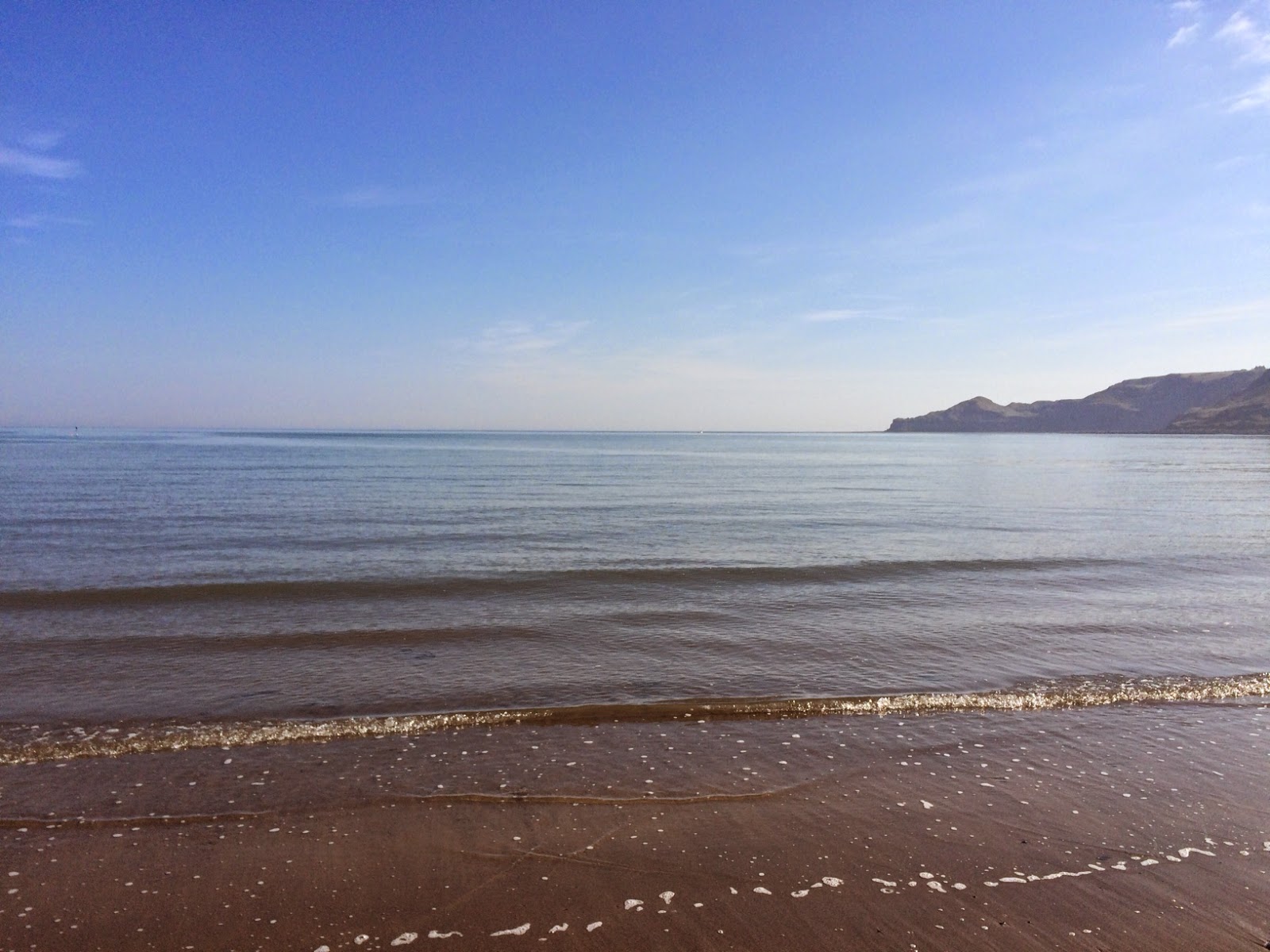 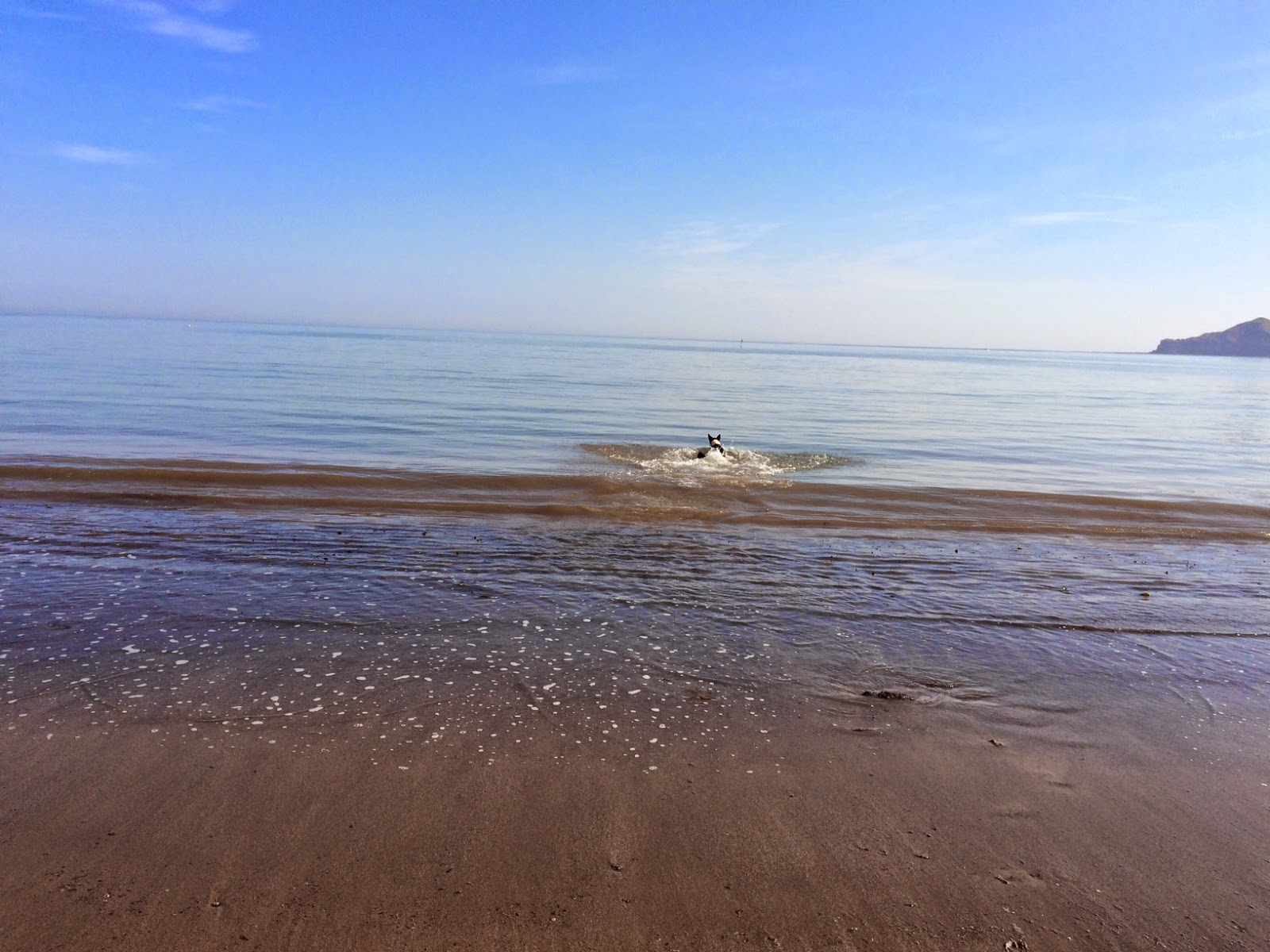 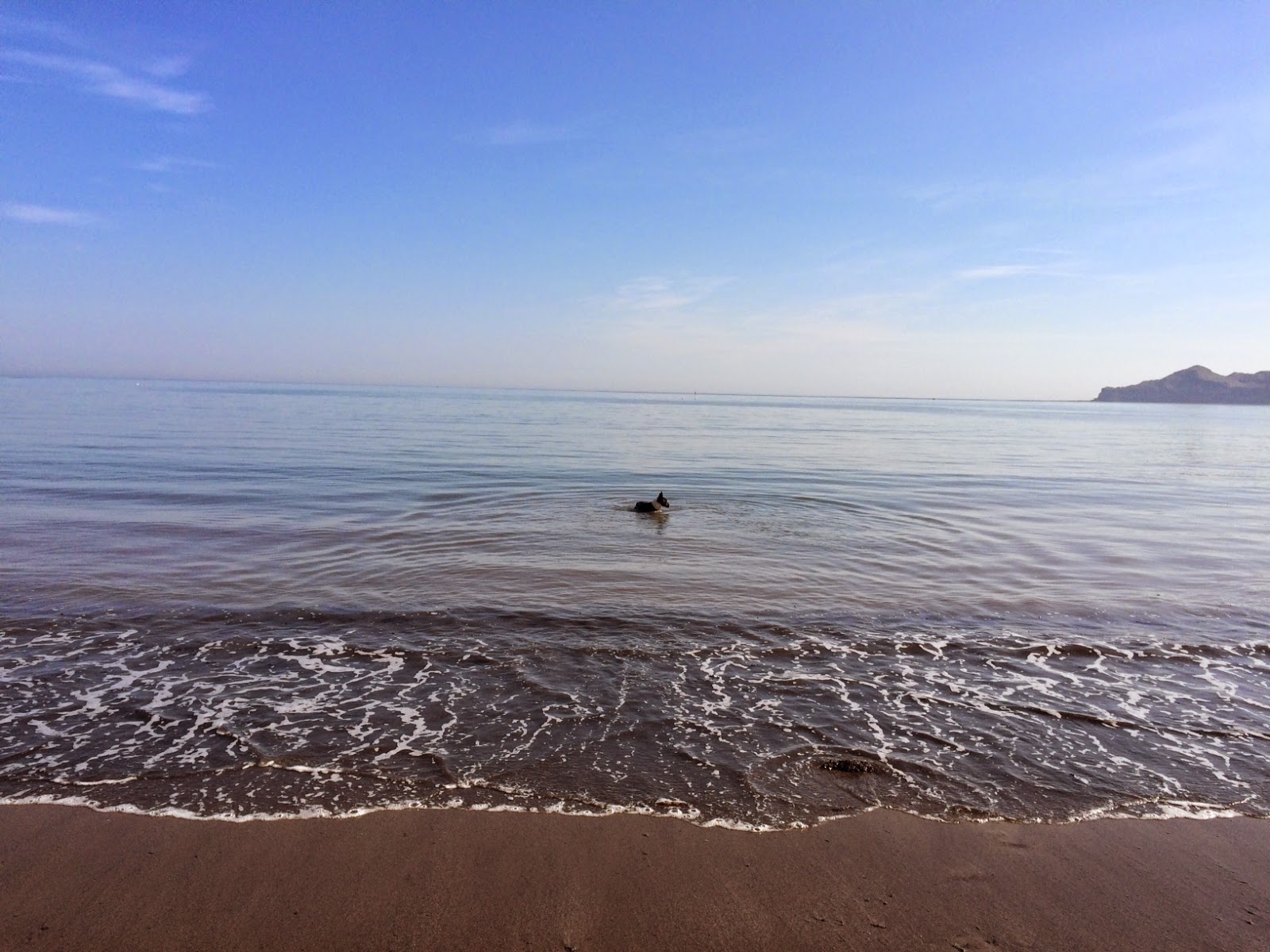 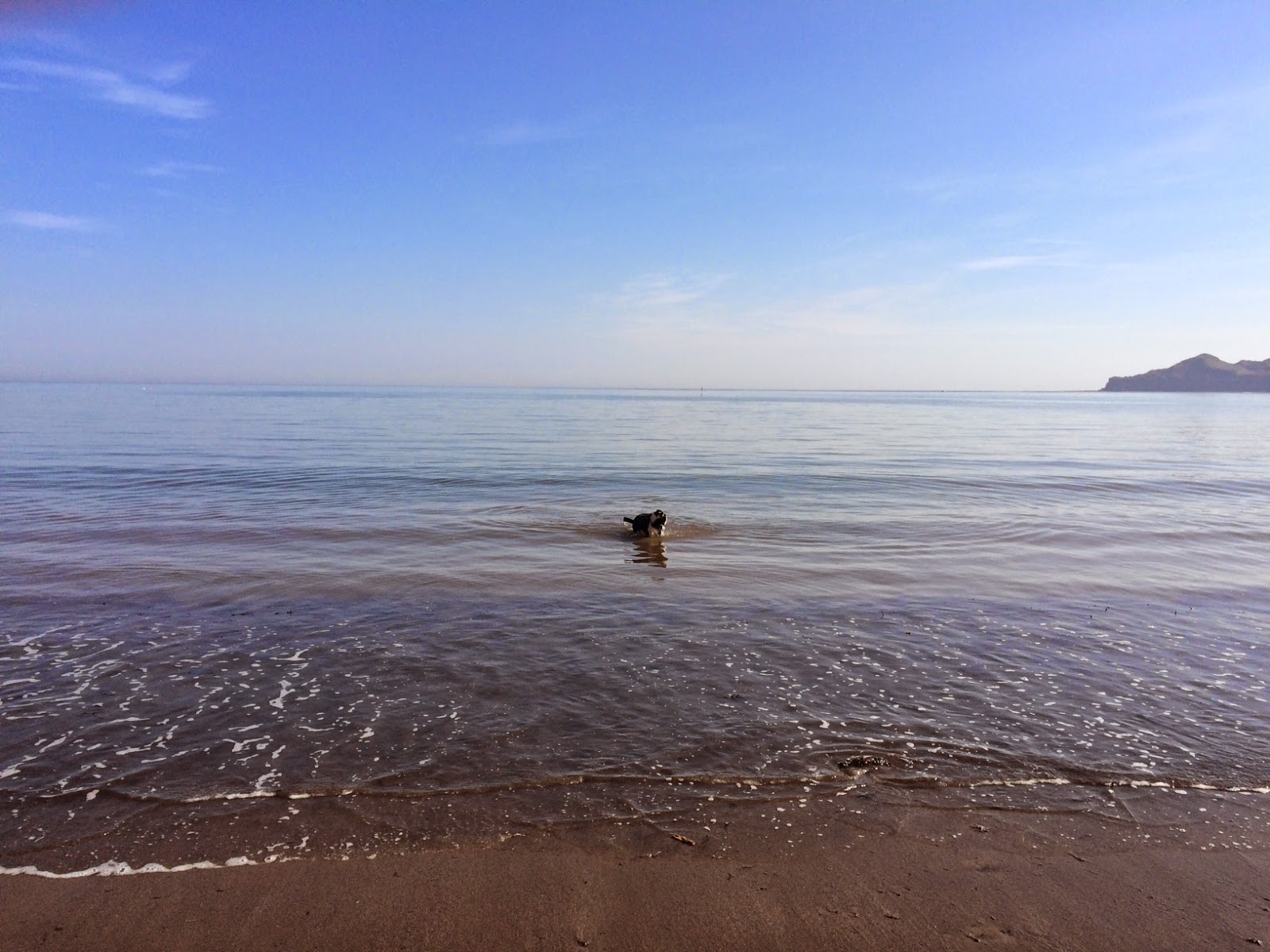 Poppy decided that Runswick Bay was the best place she’d ever been to and that white houses make her happy. 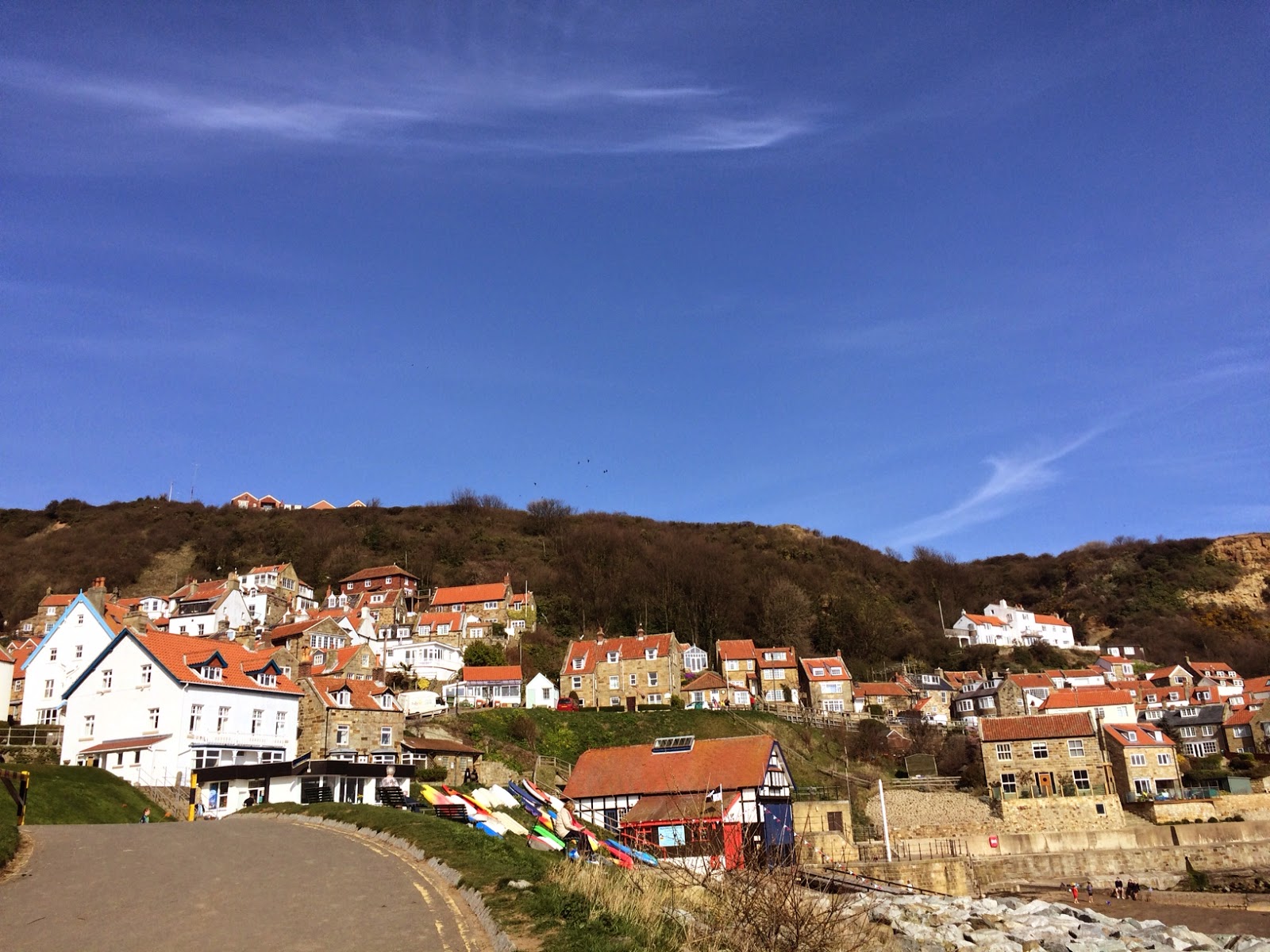 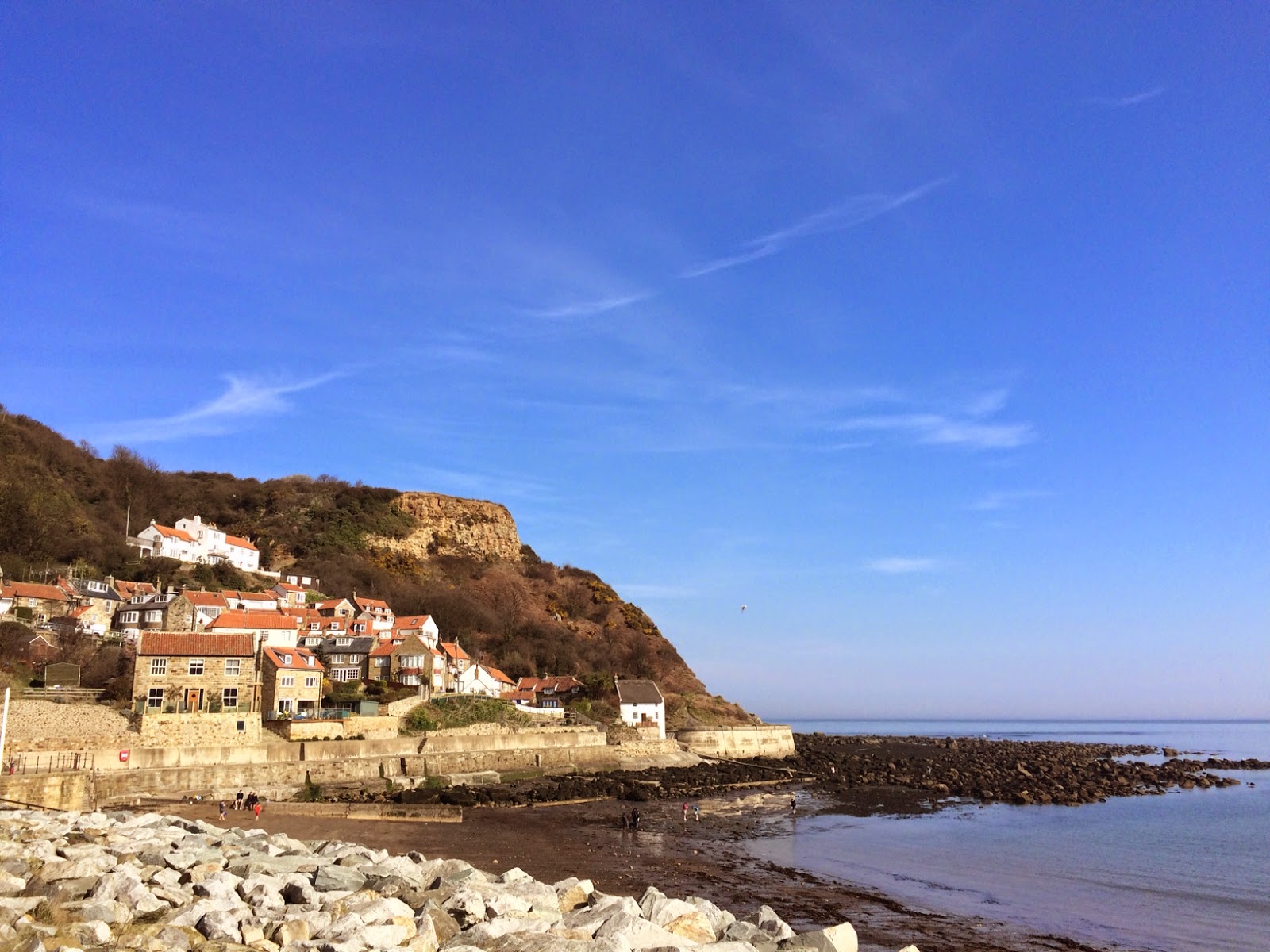 Generally a good start to the day. Bet found two boys who were happy to throw sticks for her. There were caves. The sea and the sand stretched out in the sunshine. No incentive to move on really. 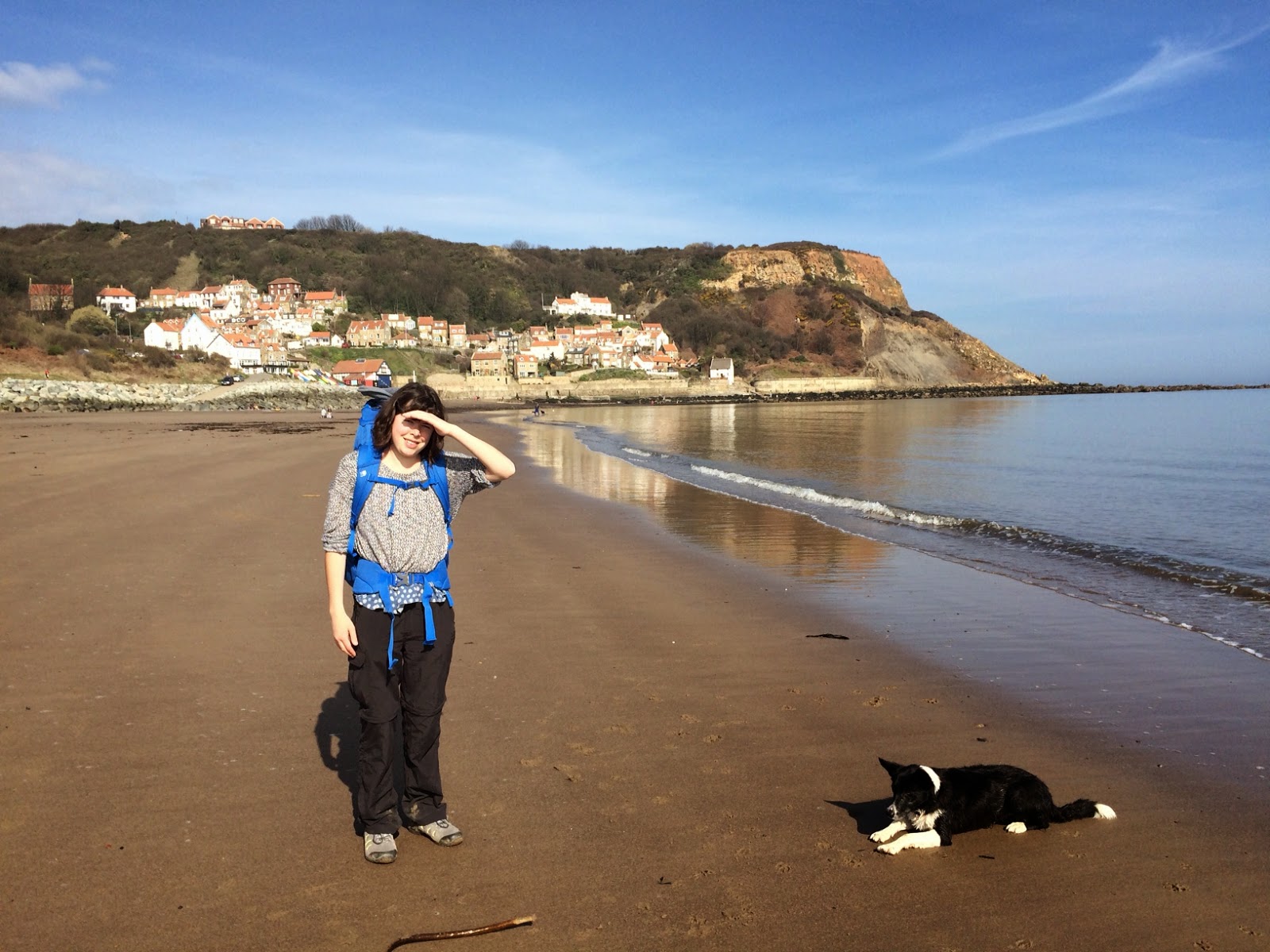 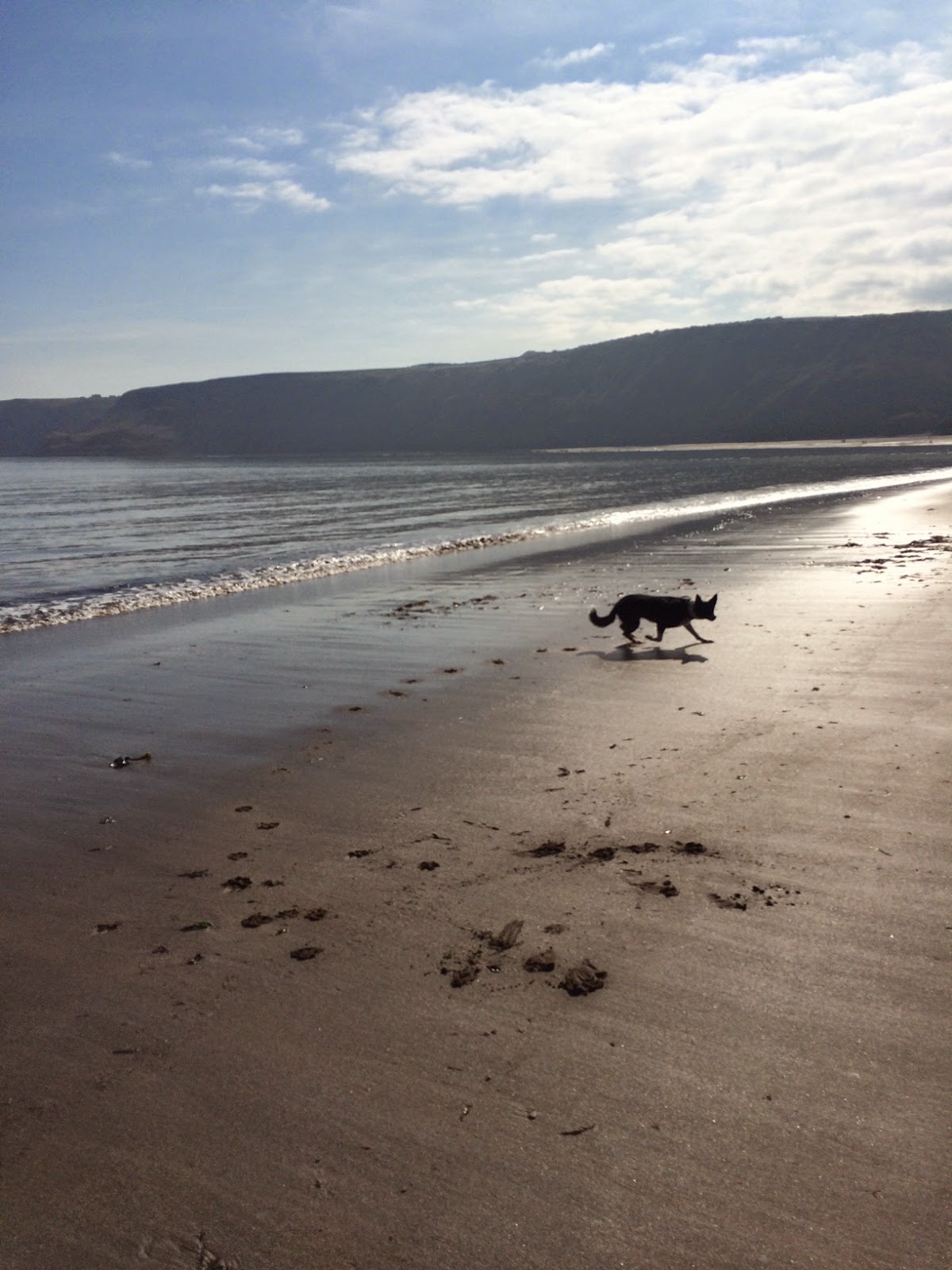 But we did. We climbed a lot more steps and reached this view at the top. 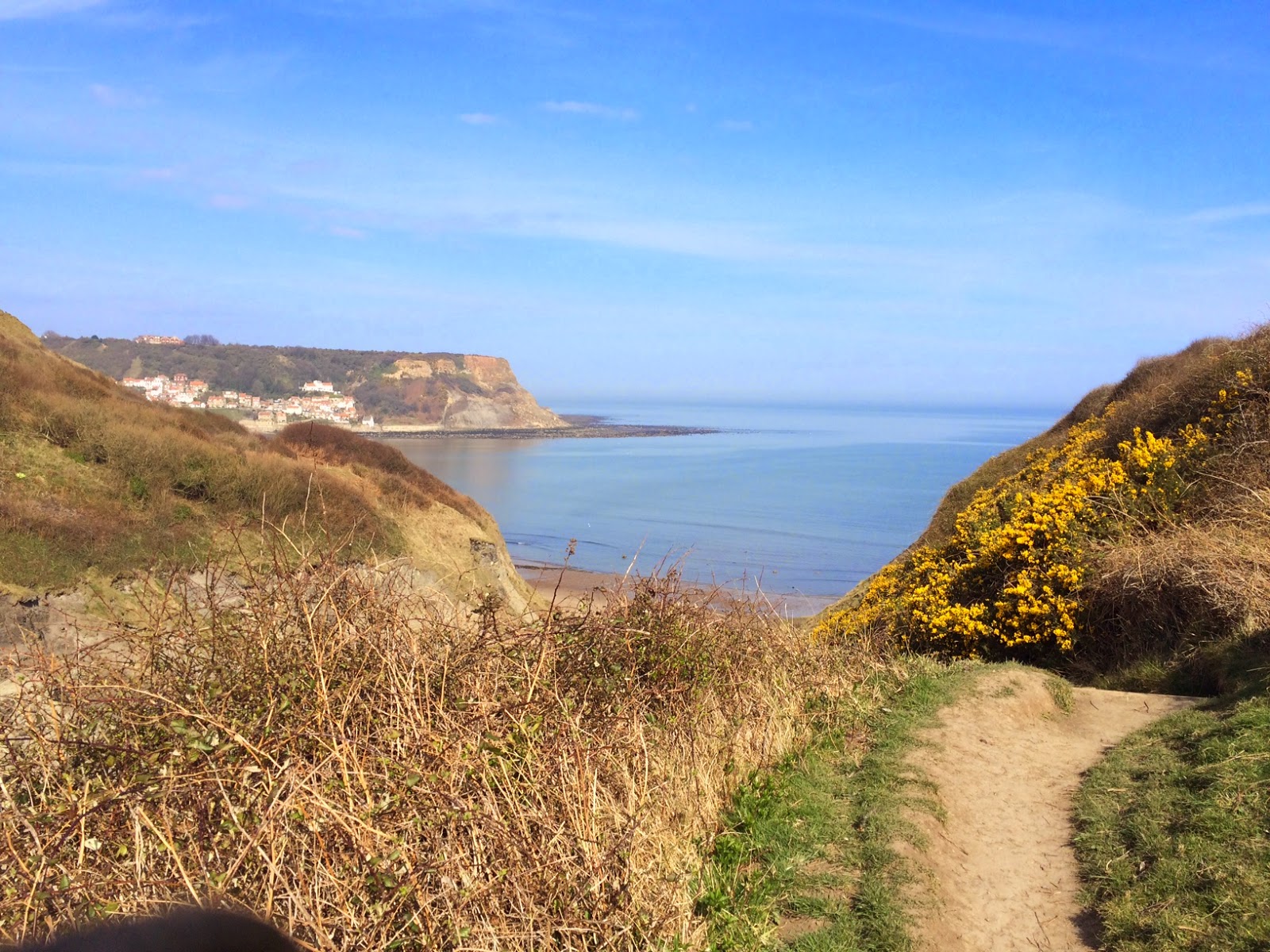 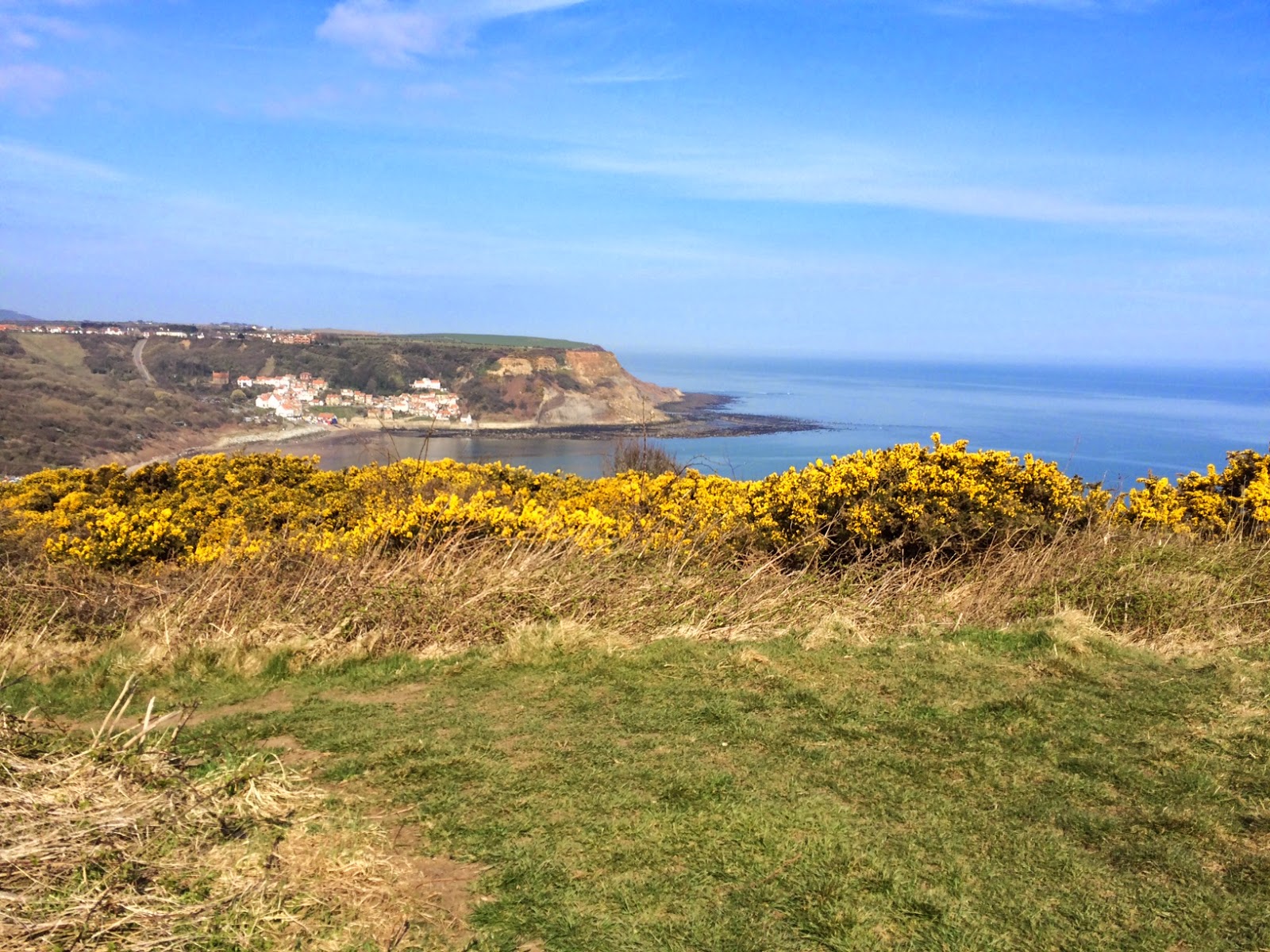 We’d come up with a plan last night. We were meant to be walking to Robin Hood’s Bay which was sixteen miles away. We hadn’t really recovered from the long stretch to Hartlepool and it seemed a long way. We decided to walk the nine miles to Whitby, get fish and chips from the Magpie, and then get the bus to Robin Hood’s Bay.
Which is almost what we did.

We walked to Whitby. The cliff path wasn’t as scary as yesterday. It wasn’t quite so high, nor so near the edge, nor so crumbly. Poppy had found her walking legs and was striding along. My feet were a bit sore. We saw violets and lots of speedwell. 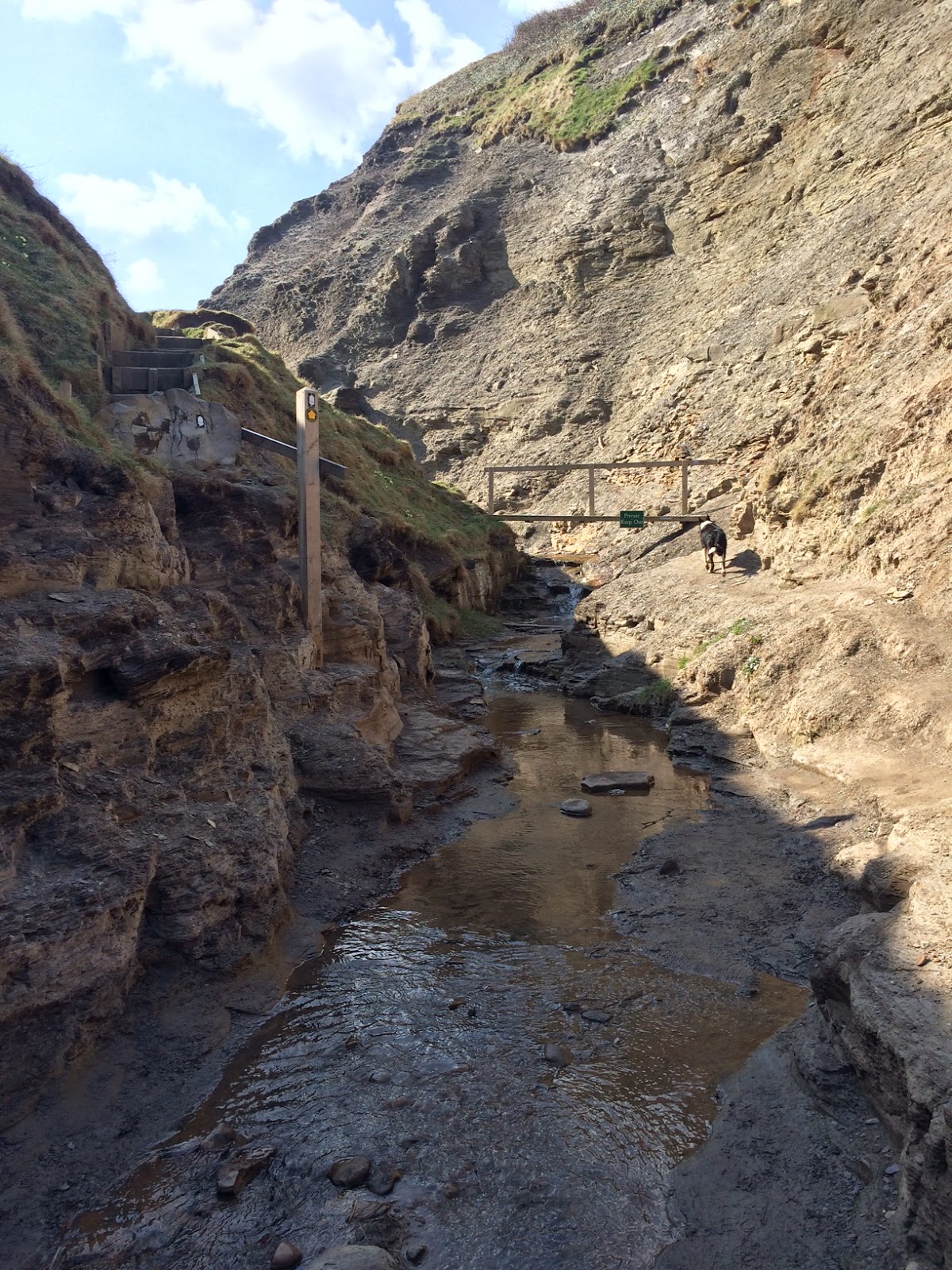 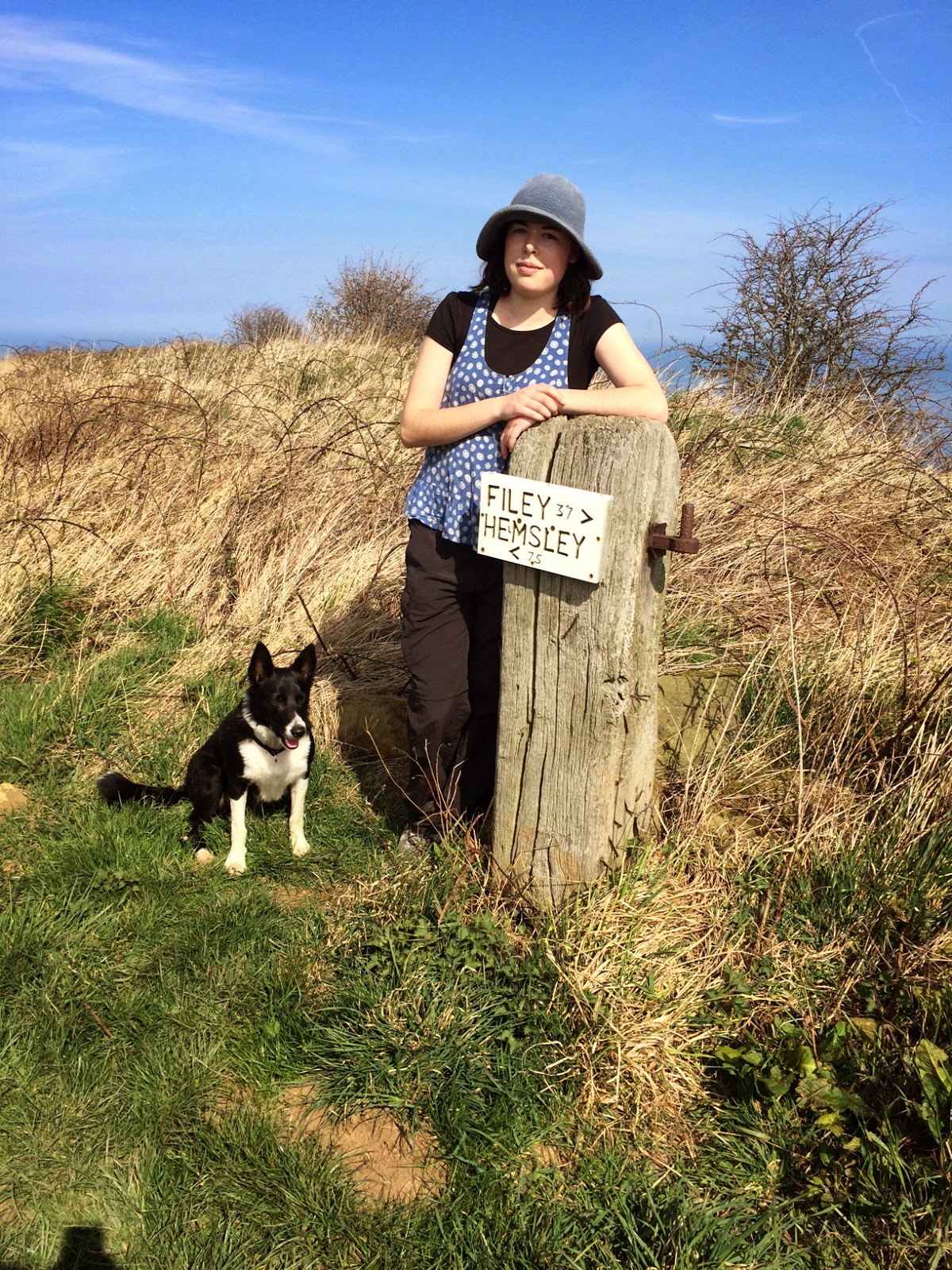 We passed through Deep Grove quarries which Poppy decided was the best place she’d ever been. 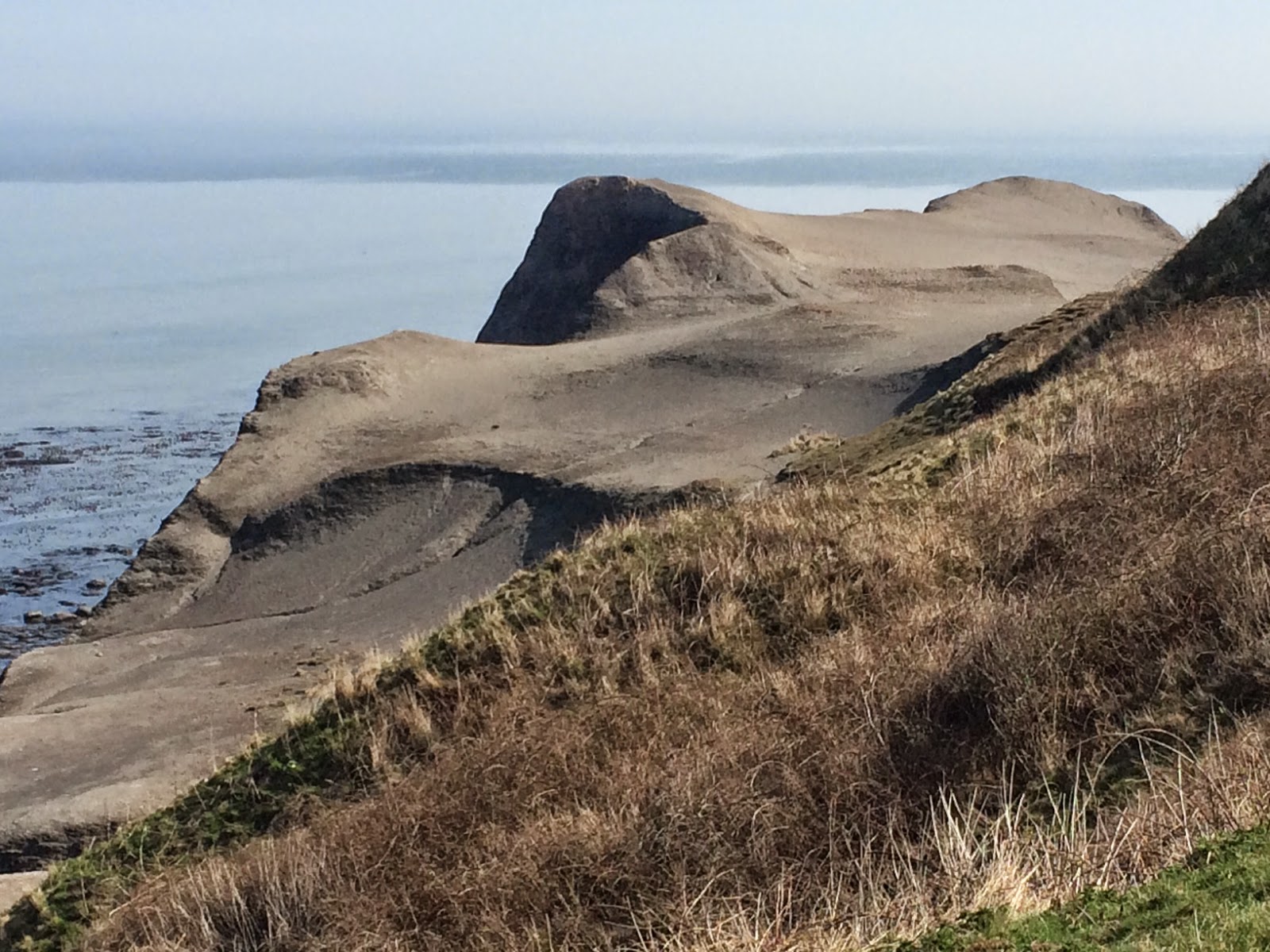 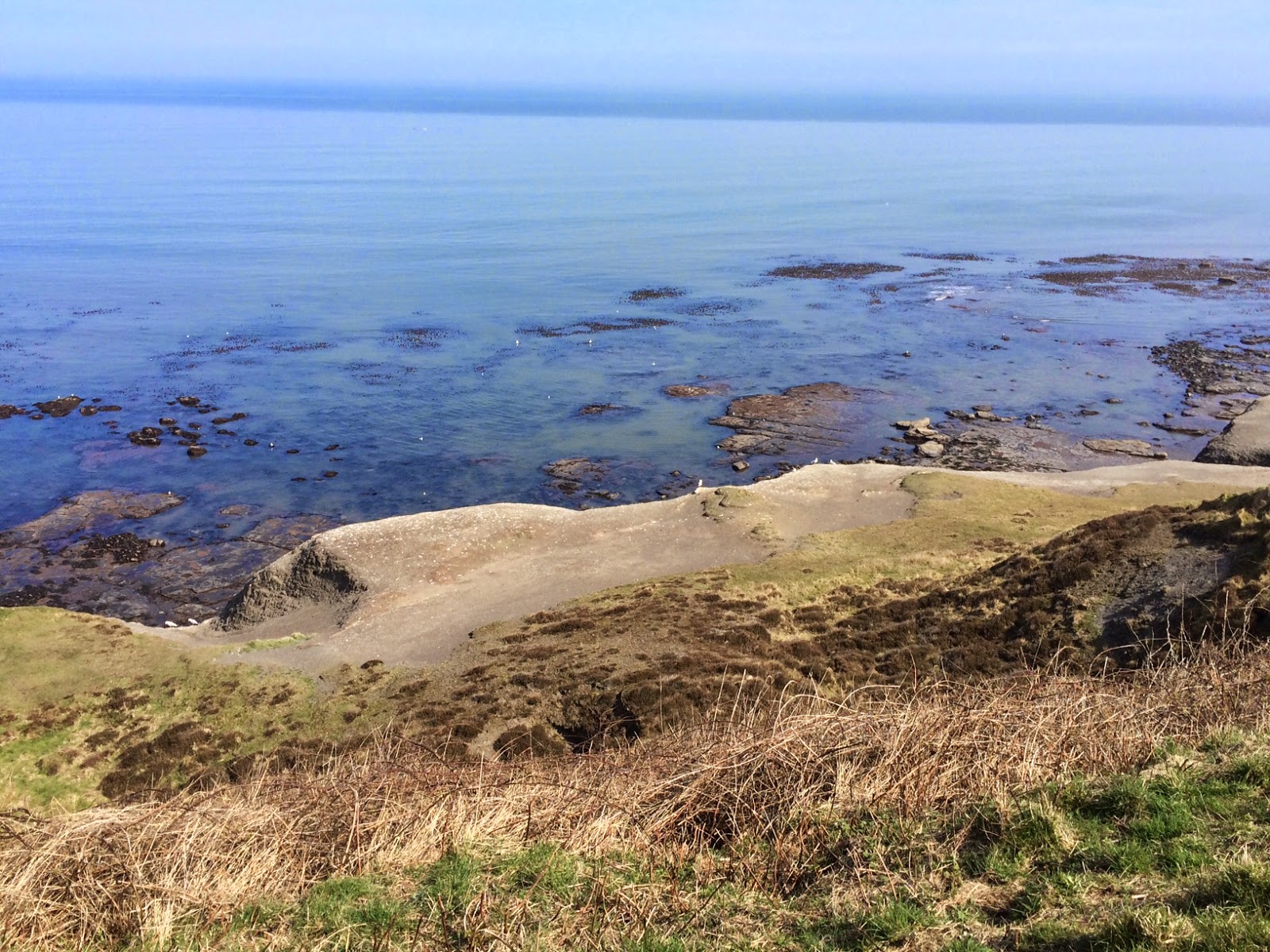 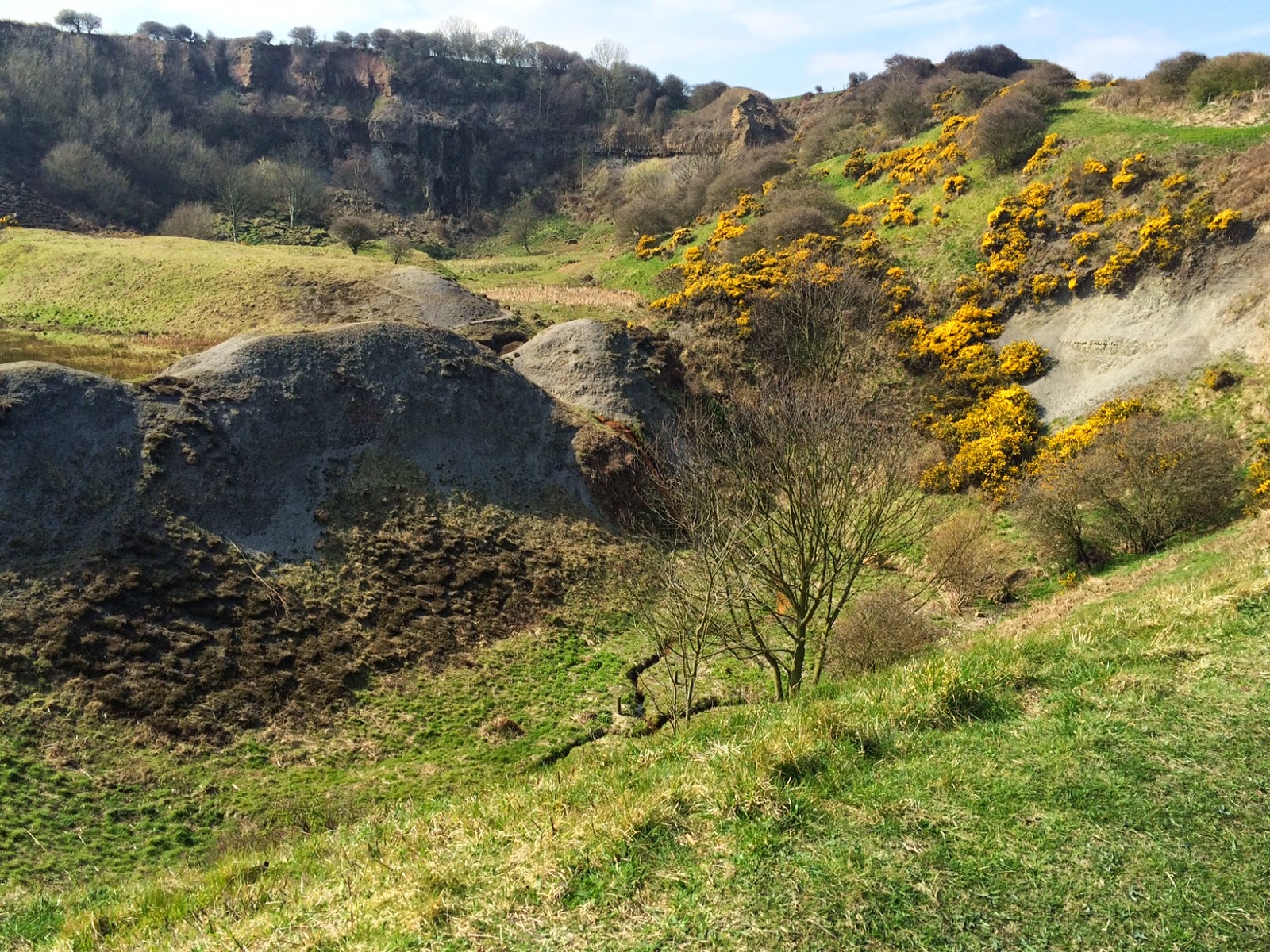 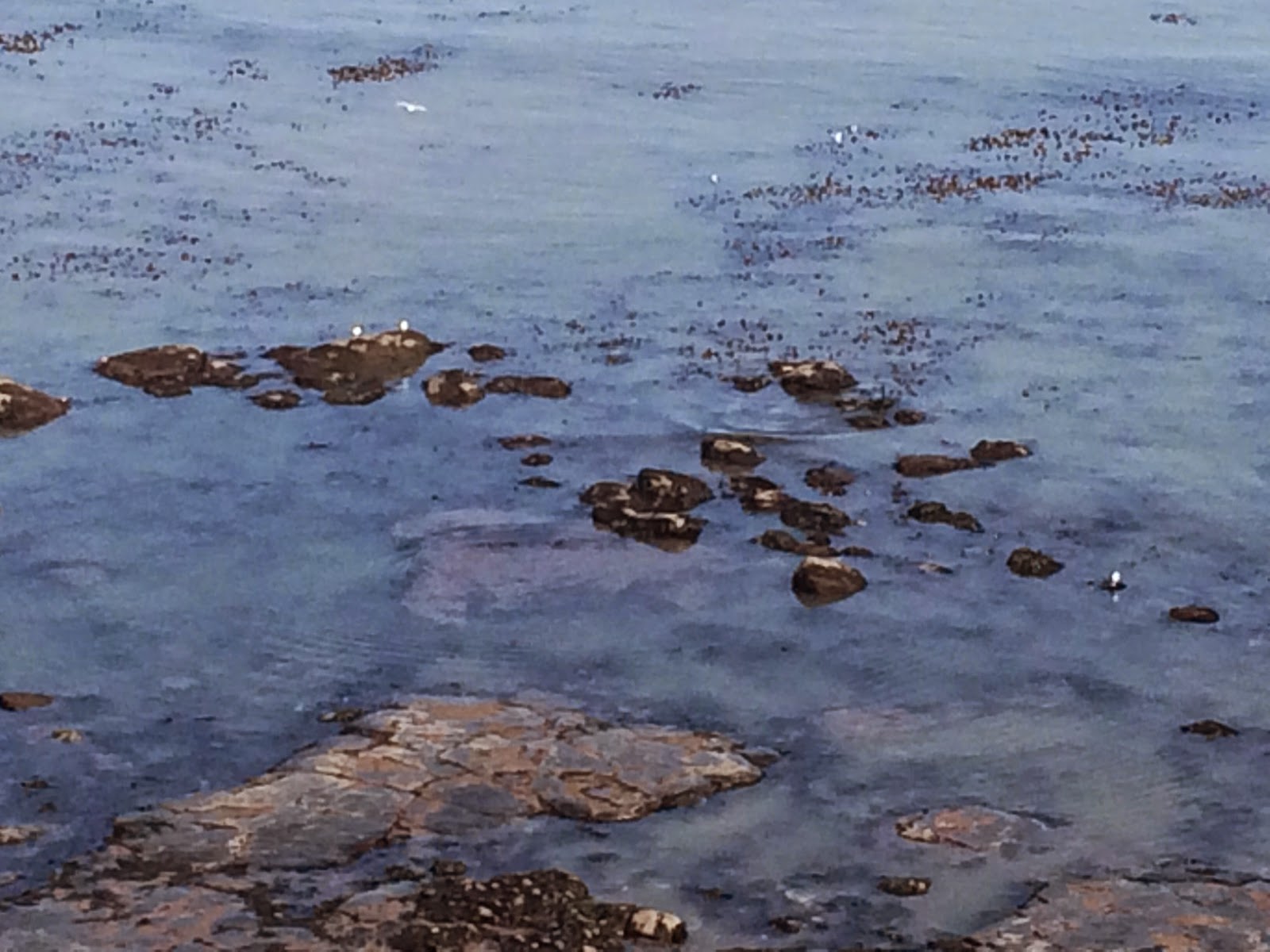 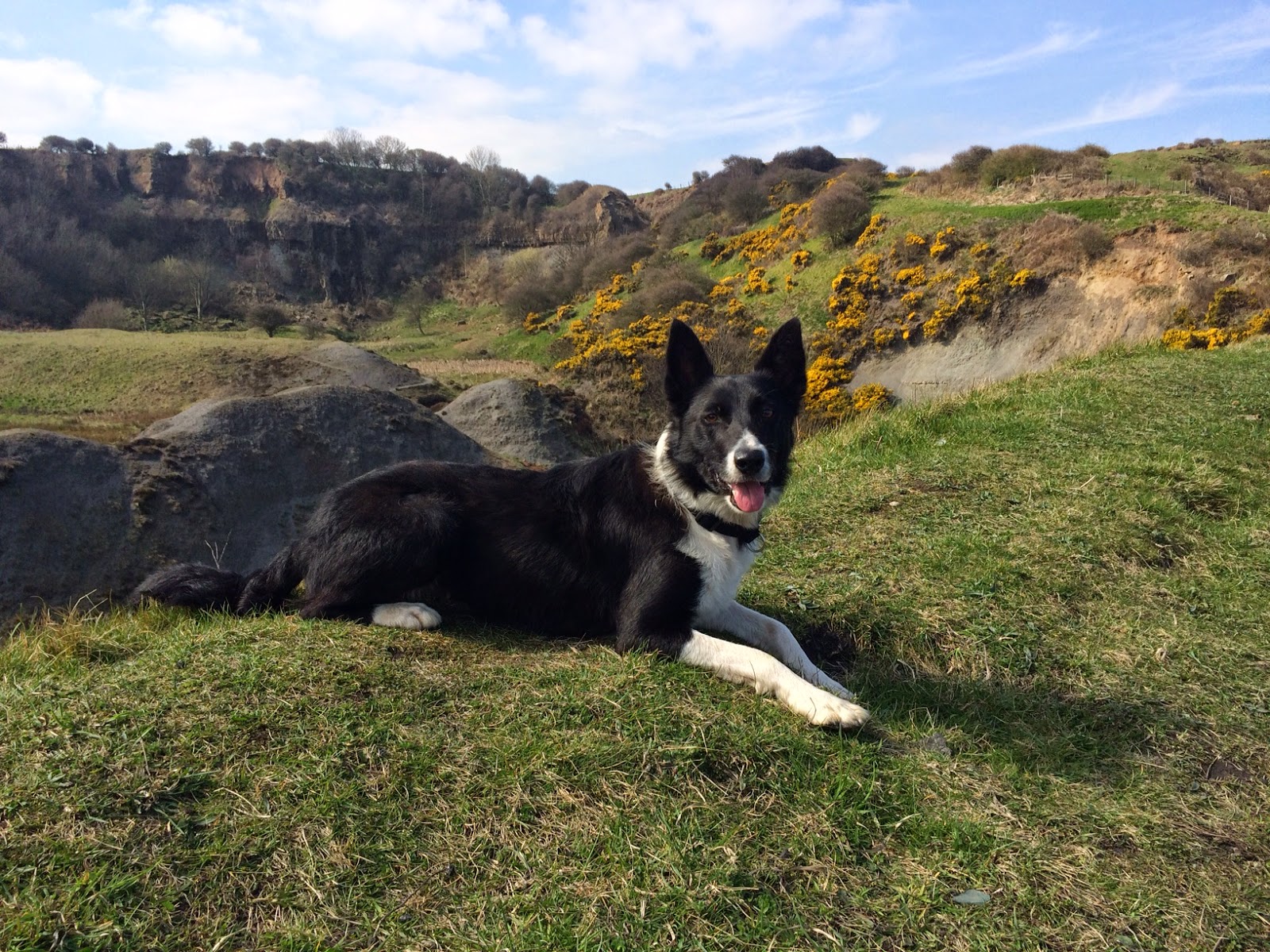 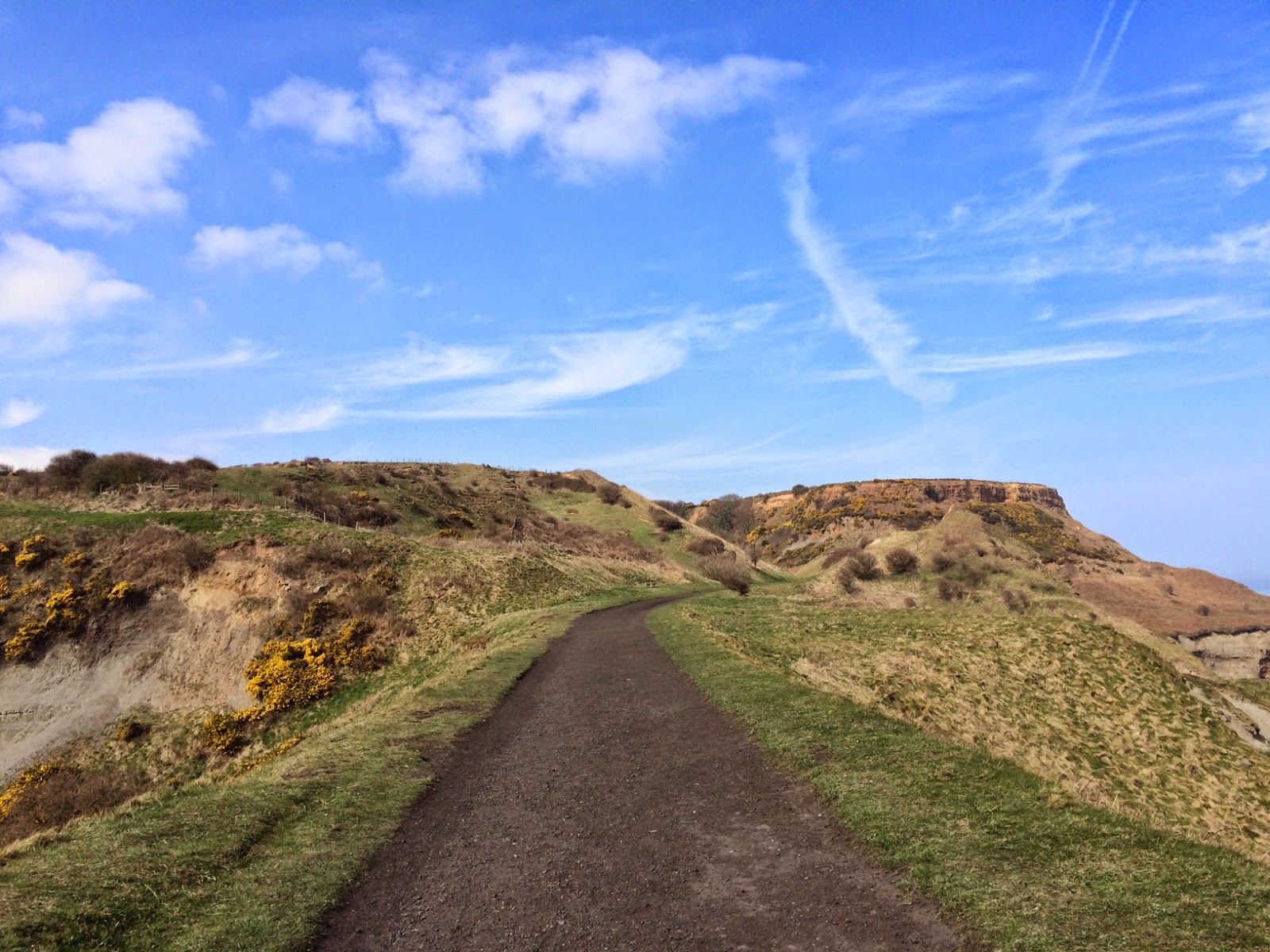 We reached Sandsend and bought ice creams  We were eating them when I heard someone calling my name – it was Caroline, a friend from home, on holiday with her family. We chatted for a few minutes about how strange it was to bump into each other this way, then moved on.

I took my shoes off and it was wonderful to walk on the sand in my bare feet. The tide was out and we
could have walked the rest of the way to Whitby on the beach. I suggested this to Poppy and she was not impressed. She didn’t want to take her shoes off and she was finding walking on the sand in her shoes tough going, too slow. So reluctantly Betty and I left the beach and we walked the last two miles to
Whitby along the prescribed route of road and paths, looking forward to fishand chips.
Well, we knew Whitby might be busy, and that there was likely to be a queue at the Magpie. What we hadn’t realised was that it would be like Oxford Street in the run up to Christmas. The queue was long, and we might not have minded, except that just being in Whitby was pretty much unbearable after the lonely cliff paths. I love Whitby. I love the Abbey and the old town and the harbour and the fish and chips, the church and the seagulls and all the literary and historical associations. I just won’t ever go there on a sunny day in the school holidays again.
We bought fish and chips but not from the Magpie. We even managed to get gluten free batter for Poppy. We sat down on a bench to eat them, and then I heard someone calling my name. It was Caroline again. We said Hi. She must think we’re just eating our way down the coast.

We were all pleased to leave Whitby on the bus, even Bet. We arrived in Robin Hood’s Bay at the lovely Clarence Dene B&B, and are chilling before heading down the hill to the pub. 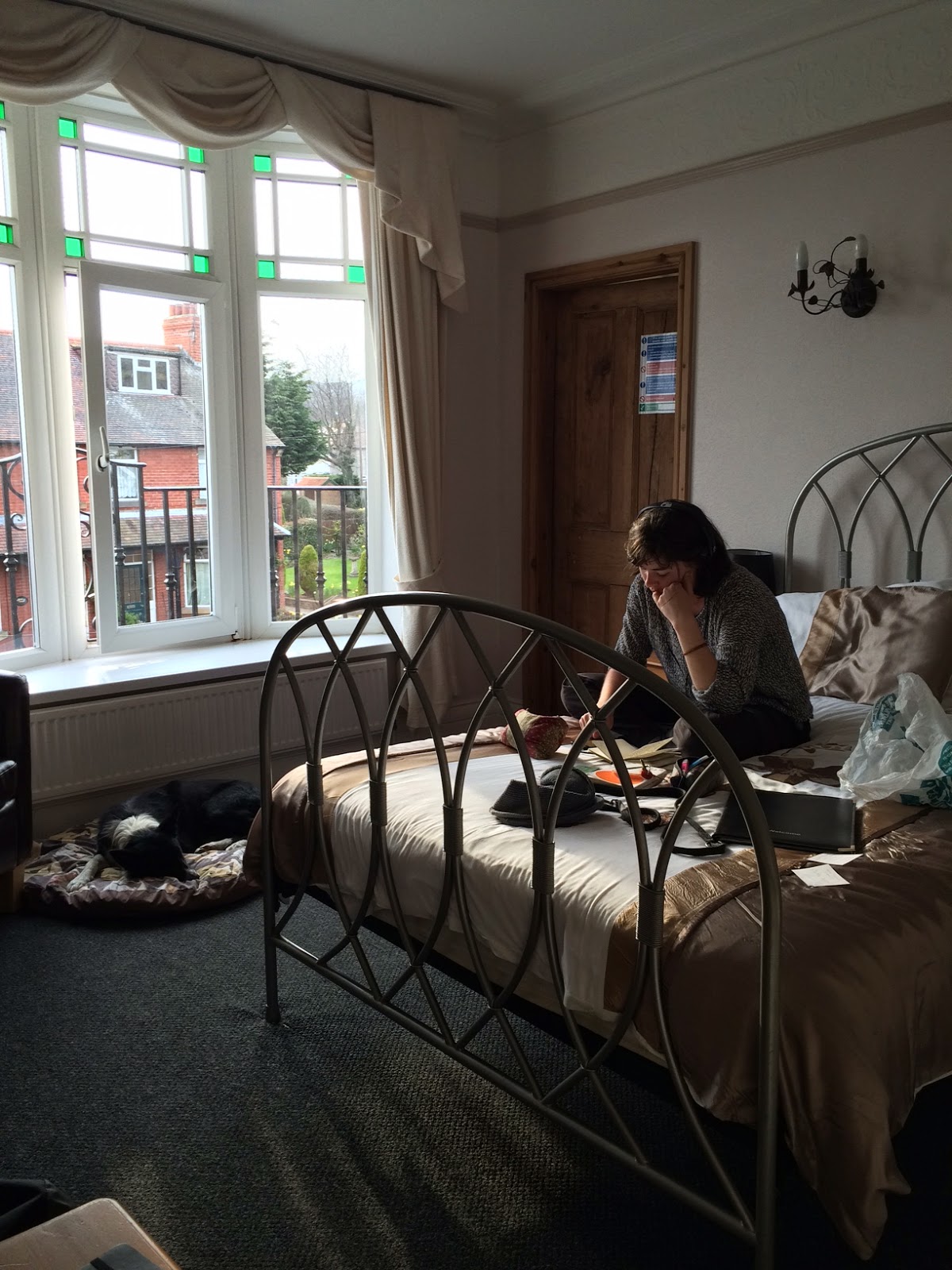