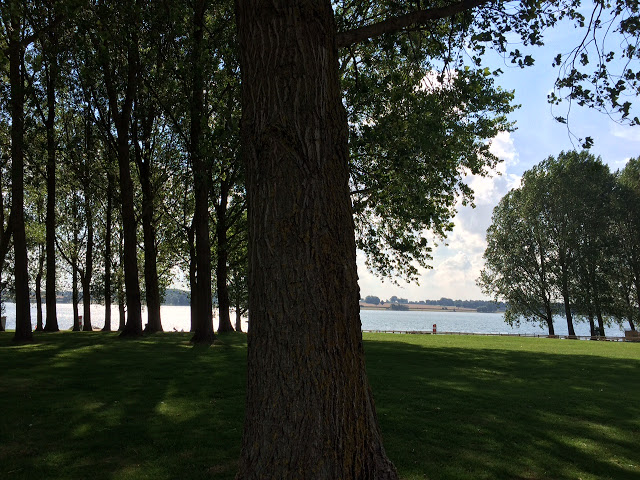 We’d walked the first four miles out of Oakham before, last
month at the end of the Viking Way. That day we were hot and tired and wanted
to catch the bus. Today it was the beginning of the Hereward Way rather than
the end of the Viking Way, the morning was cool and we were fresh from
breakfast. In theory we could have caught the bus – after all we’d already
walked this bit – but it would have seem a bit defeatist to cheat on the very
first stretch.

Anyway, it’s different going in the other direction with
fresh eyes. Last time I didn’t even notice the mansion of Burley on the Hill
looming over the landscape. 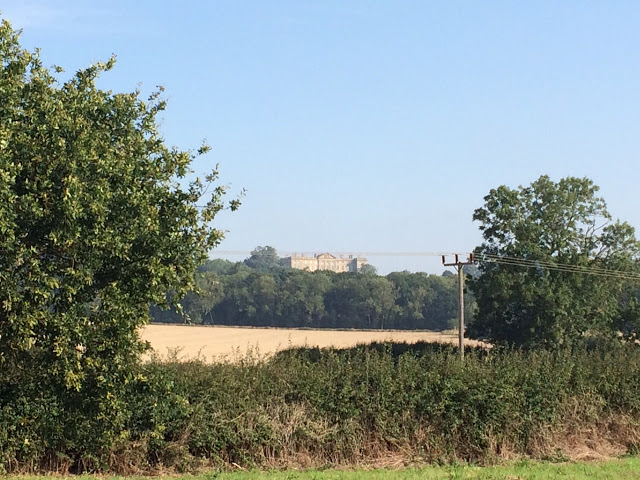 The path along Rutland Water is a cycle path and we passed quite a few cyclists as well
as walkers . It was a lovely morning for it.
Four miles in we stopped for a coffee. 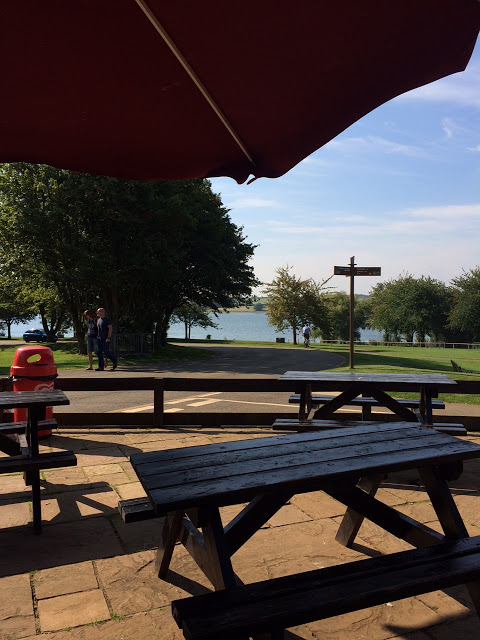 It was a very pleasant place to be. Johnny had a little rant
about government approved recreation areas, how we are meant to go to them to
have government sanctioned fun and they’re designed to keep us happy like
sheep. I told him to stop being an old grump and look at the mother and toddler
cycling group going by! The toddlers were all in baskets on the back, the
mothers were young and athletic.
We passed trees and water… 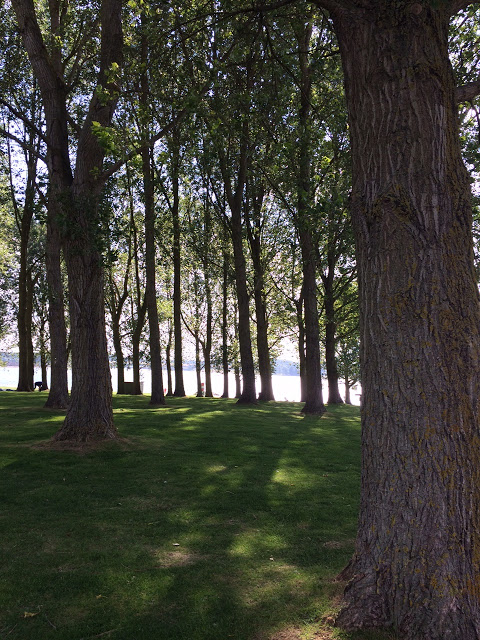 …and reached the dam. 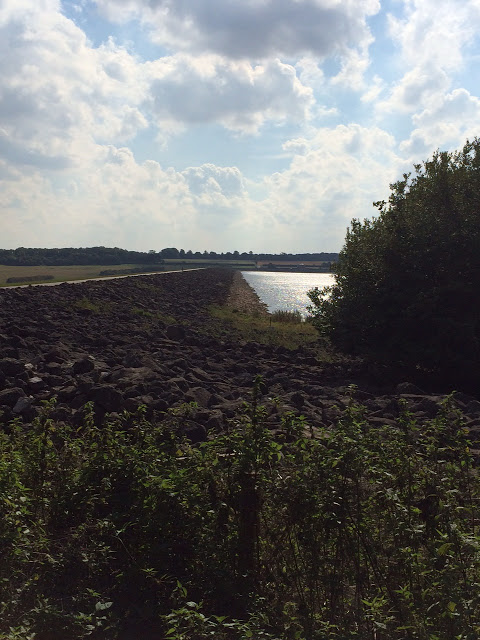 Our path departed from the cycle path which continued across
the dam. (Can you see that cyclist?) 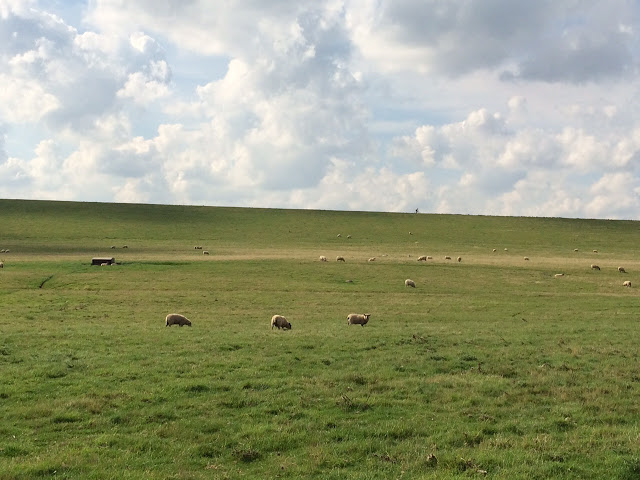 … and  headed off
across the fields, even though there were no footpath signs and Johnny didn’t
think I knew what I was doing.

Soon we were in Empingham, the first of many pretty villages
along the way today. 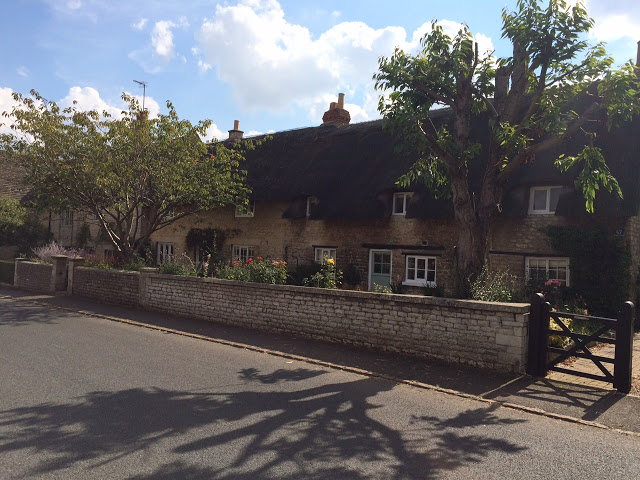 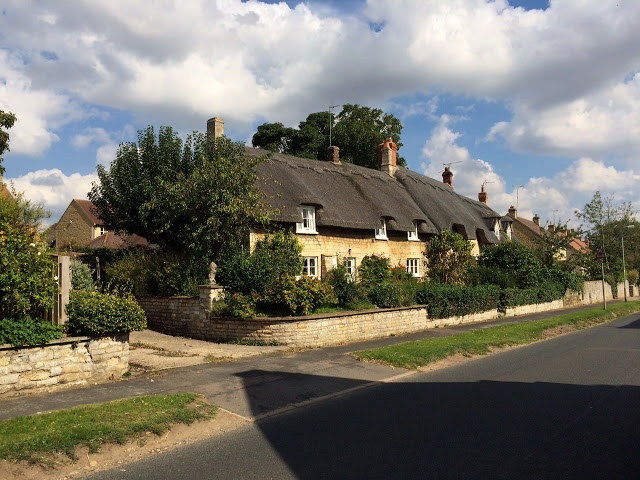 The Hereward Way guide says they are quintessentially English.
Maybe. They are a certain view of England, the view people like to put on
chocolate boxes. It’s not really the England I know. But hey, I can still stand
in the road taking photos like a tourist.
We crossed a field of cows, which worried Johnny
momentarily, but apart from a few stares from very cute calves, they were much
more interested in the grass than us.

Then we reached a ploughed field. It was a very large
ploughed field and our path was meant to go across the middle of it. There was
no path. There was no way we were going to stumble for miles over loose ploughed
earth, so grumbling about farmers who ploughed up footpaths, we marched along
the road.
The landscape is very restful. Rolling, easy on the eye. We
passed this windmill, and reached Ketton. 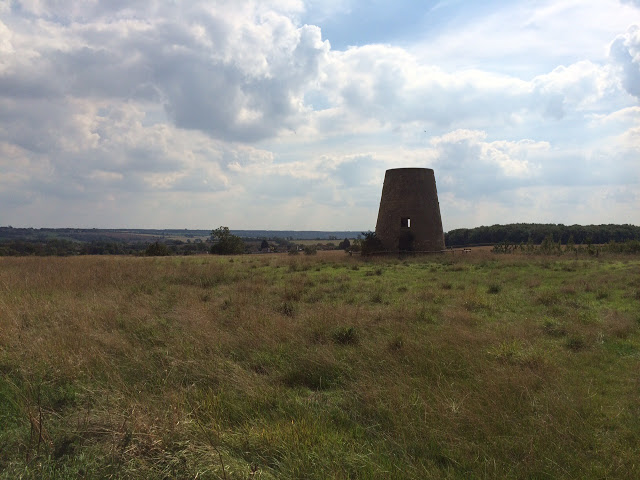 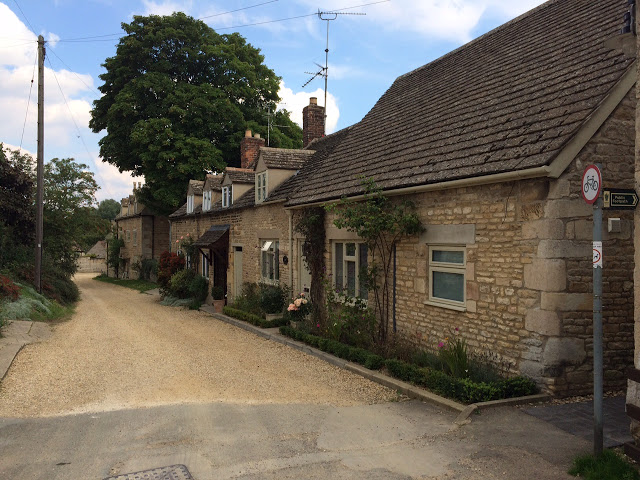 Ketton is a village made of stone. I guess all villages are
built of something, but Ketton seemed very stony, with narrow streets between
large buildings and fences made of grave stones. 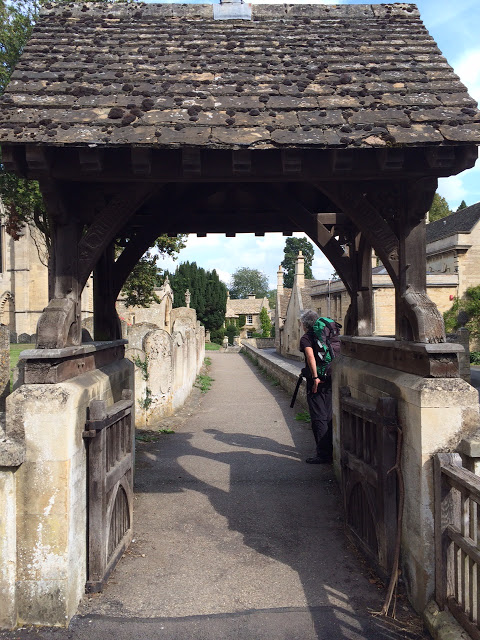 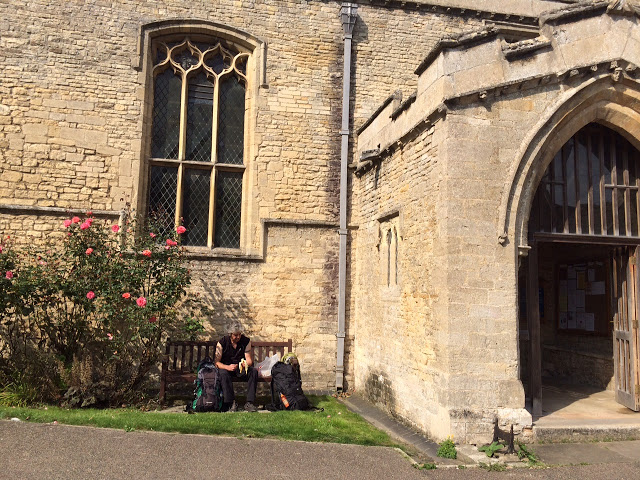 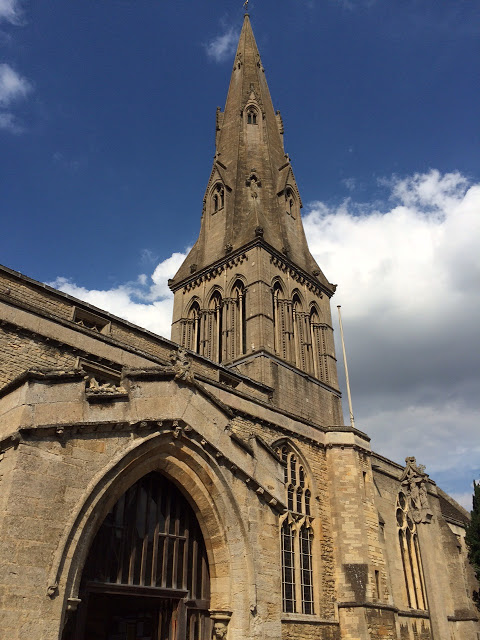 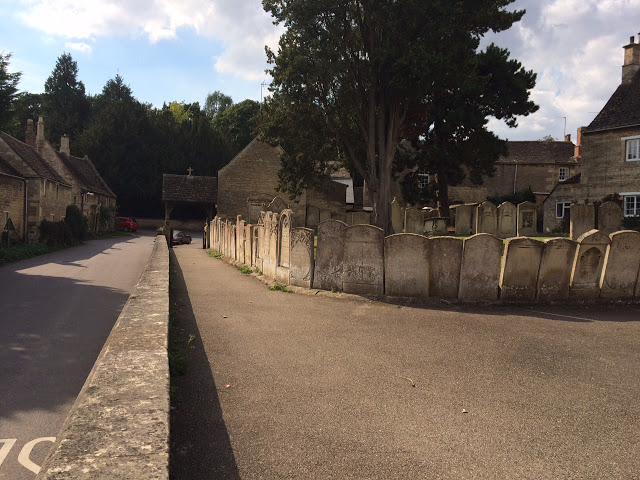 We stopped briefly, but the
pub was closed and although the church was open, it had no loo.
So we walked along some pretty lanes, and left Rutland. We were
back in Lincolnshire. 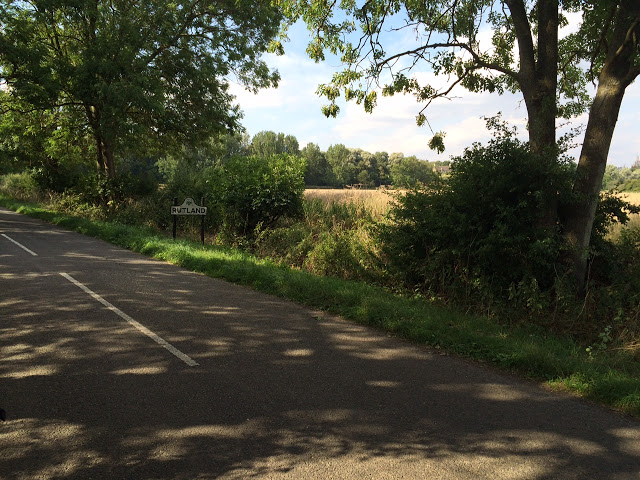 The path headed up the hill through fields. I liked this
path. 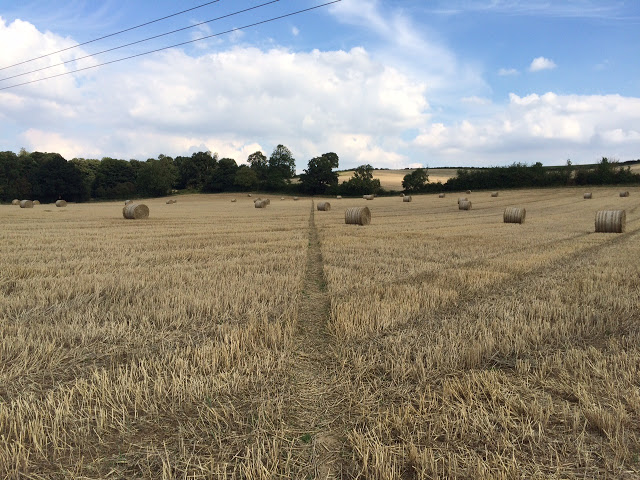 No keeping to the field edges, it went the way it wanted to it, right
through the middle of wheat and kale with no messing. We even met other walkers
on this path. Well, just one actually. And he was wearing flares and plimsolls.
At the top of the hill we had a last look back at the cement
works, acting as though they’re a feature of landscape. Johnny said they looked
like some sort of sci fi citadel. 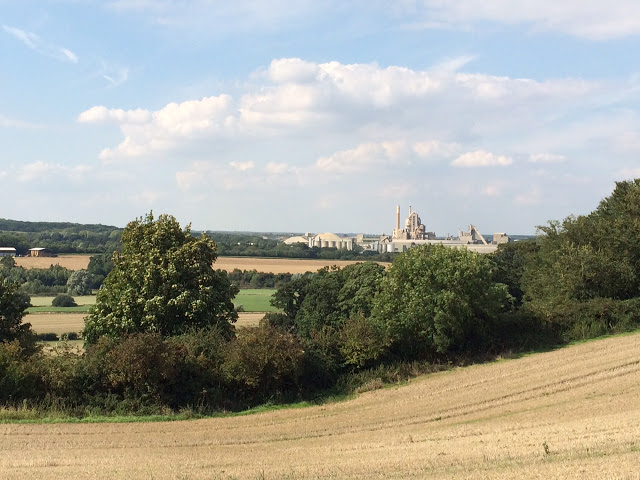 Easton on the Hill is a very pretty village, but its pub was
not open. 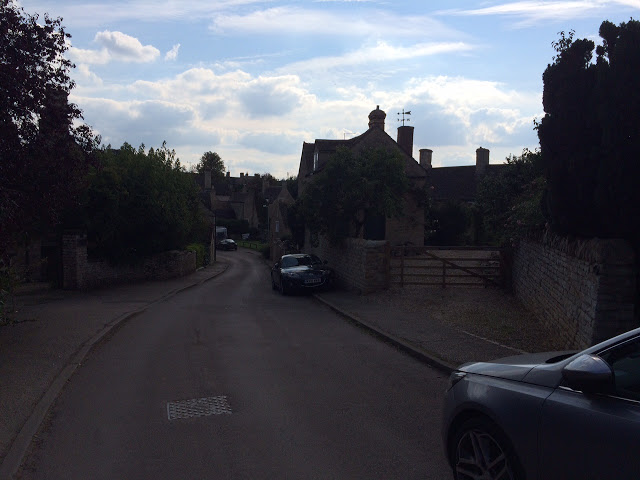 We walked down hill, over the railway bridge, over a rickety
bridge, through a tunnel under the A1 and onto the flood plain of the River Welland,
above which Stamford stands, shining like the golden city.
We passed gates in walls  – hiding secret gardens? 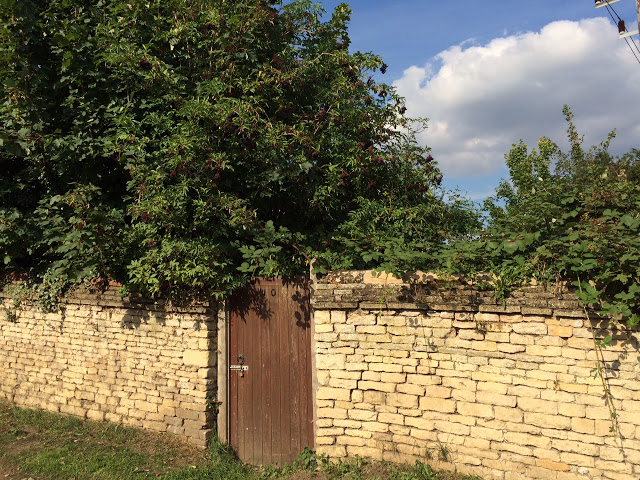 Then we reached our B&B, a shower, tea and scones.
Hurray.
16 miles.
0 comments… add one