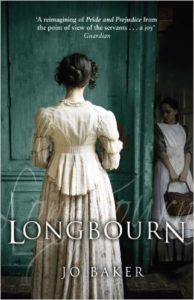 This week included an overnight hospital visit and lots of waiting about as well as the launch of Tainted Love, my second novel. So anxiety levels have been a bit higher than normal. I wanted a book to read whilst waiting, but it had to be one that was going to grab me and hold me and keep me safe.

A few people had recommended Longbourn to me, but I wasn’t convinced. I haven’t read P D James’ Death Comes to Pemberley, but I saw the TV adaptation, and I thought that probably it was as well to leave Jane Austen alone. Not to say that you can’t mess with the classics and make something new – The Wide Sargasso Sea by Jean Rhys being a case in point . And I loved Bridget Jones (I read the The Edge of Reason immediately after reading Persuasion and I would heartily recommend you do the same – it was hilarious) But I found the cover of Longbourn off-putting and I’d kind of decided not to bother. Then a friend offered to lend it to me just a couple of days before I had to go into hospital, so I decided to give it a go.

I read all of Jane Austen’s novels when I was breastfeeding (well, all except Mansfield Park which I read at university and will happily never read again). They are, for me, the ultimate comfort reading. Like your Aunty Dorrie’s scones with homemade jam, or a roast chicken dinner – they belong to world where everything is just as it should be and most people are basically good, and those who aren’t quite good will get their just desserts, and virtue will be rewarded. It’s what you need when you’re feeling a bit ill. When I was poorly as a child my mum used to put two armchairs together to make a big crib thing, and I would lie in it and read until I was better. Then it was Enid Blyton, but this week Longbourn did the trick.

The events of Pride and Prejudice and the doings of the Bennet family are background here to the story of Sarah and James and Mrs Hill. We go in through the servants’ entrance, so to speak. We see our favourite characters through the eyes of those whose lives are devoted to making them comfortable. And to an extent we are invited to criticise and judge. We are shown how Elizabeth’s jaunts and muddy walks result in hours of scrubbing and bleeding chilblains for Sarah. We are reminded that Bingley came by his money through his father’s involvement in the slave trade (though where Darcy’s comes from is not mentioned). And we are shown the underbelly of the military, hidden behind the shiny uniforms that the Bennet girls love so well. We see how war degrades personality and erodes dignity – we are shown the scars which James must always carry on his back.

But despite casting a critical eye, what comes through is that Jo Baker, like Mrs Hill and Sarah, loves the Bennets. In the character of Ptolemy Bingley she raises the possibility of something deeper, of an investigation into that world which might throw up unwelcome information – information that might mean we could never look at Bingley or Darcy or Mr Bennet in the same way again. That might make our relationship with Pride and Prejudice a mite uncomfortable. But Baker shies away from this. Ptolemy, in the end, is just a thwarted lover with a good heart. The slave trade is awful, certainly, but luckily there is no slavery in England. We are invited to take a closer look at the world of Pride and Prejudice, but not too close. Because Jane is still lovely and deserving, Elizabeth is a shining light and even Lyddie, in the end, just a giddy girl. In Longbourn we get glimpses of the dark side, but it’s still a book where things turn out all right in the end. We can snuggle into the armchair with our toast and marmite and know we are going to get better.