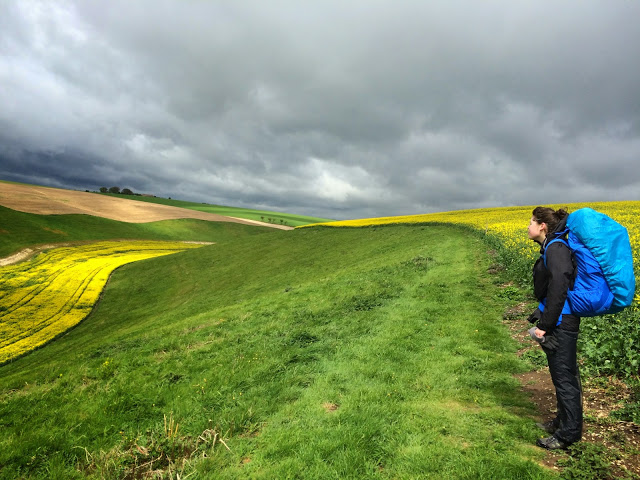 At breakfast we mixed chia seeds into our granola. They’re used  as slow release energy by the Tarahumara Indians of Mexico, the world’s greatest long distance runners, so we thought they might help us walk 28 miles. We said hello to the grandparents with the child from the train yesterday, who happened to be staying at the same B&B as us. Then we gathered our huge bags and Chris opened
the front door for us. Poppy stepped through and stopped. It was raining. I had to shove her out into it so Chris could close the door behind us. 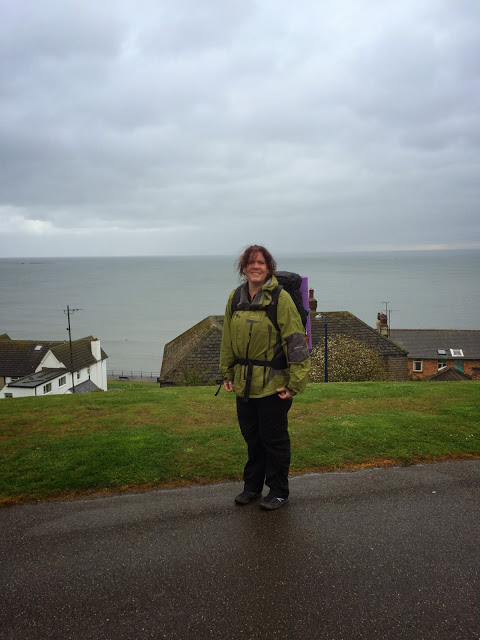 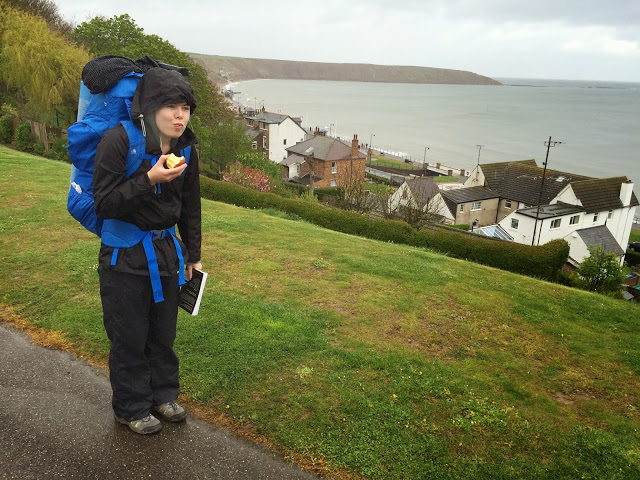 The first few miles were grey, wet and windy. The path went along one field edge after another. But after a while we found ourselves in a strange landscape which felt like it was painted by David Hockney. 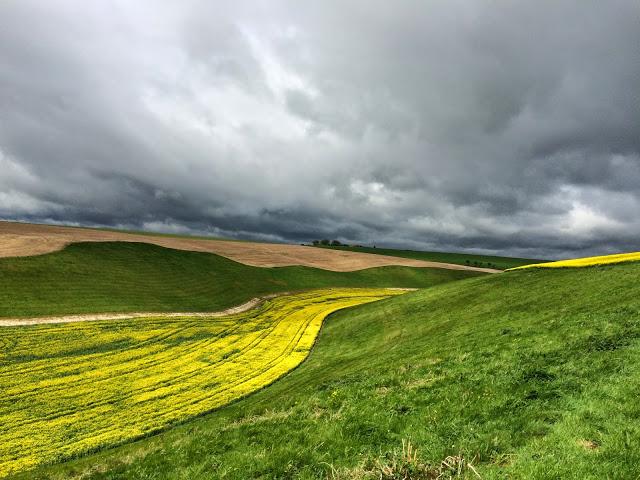 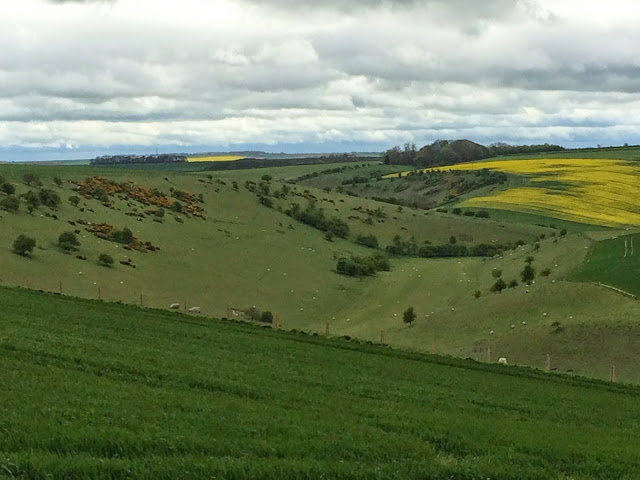 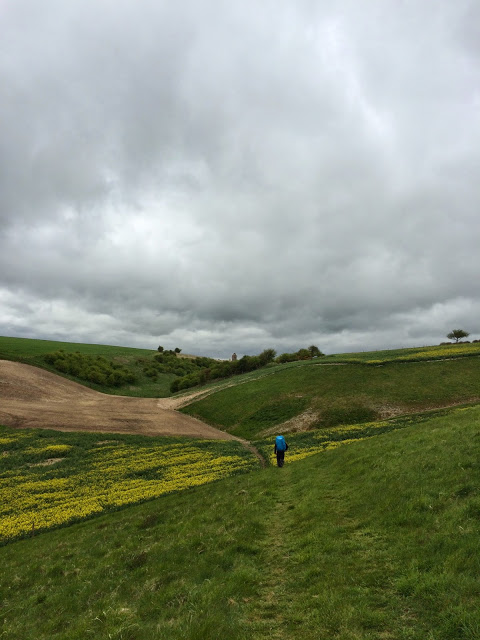 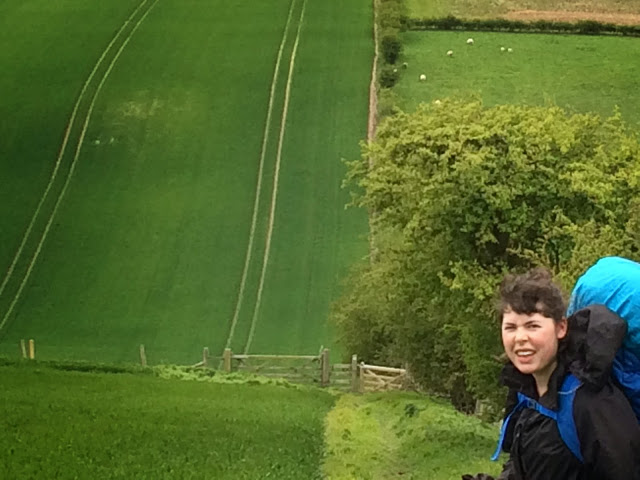 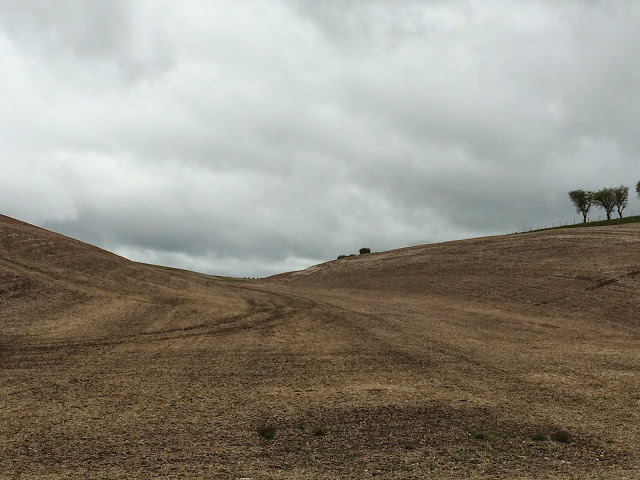 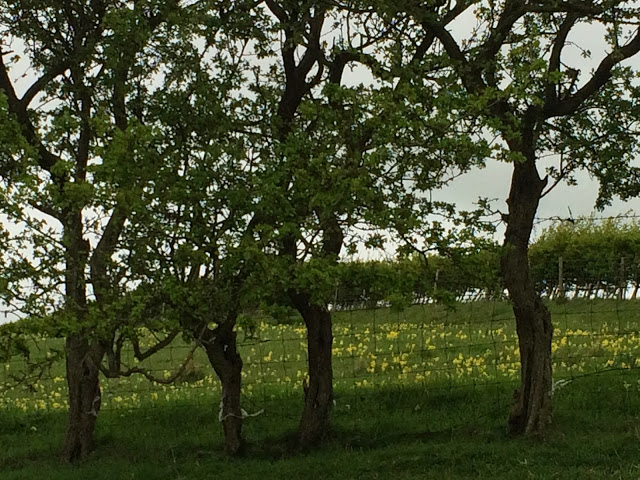 The rain had stopped, but the going was difficult underfoot. I’d been led to expect that the walking on this trail would be easy – rolling hills and easy lanes – but the truth was steeper than expected, and the
footpath wasn’t level, so all the time our ankles were twisted at the angle of the hill, which made for slow and painful going.  After seven miles in two and half hours I realised we probably weren’t going to make the distance.
We kept on. Field edge after field edge. As it was mostly crops, the path was  straight with right-angled turns, sometimes running along three edges of a field in order to keep us going in the right direction. The path was more than twice as long as the distance as the crow flies. We thought about the farmers who owned the landscape and allowed the path to cross their land, how sometimes they ploughed right to the edge so we had to walk in the furrows. At one point there was a golf course we had to walk around, adding another mile to the distance.  We were accompanied by the regular sound of shooting. We didn’t see many people, but those we did we looked at suspiciously, wondering how they’d voted. 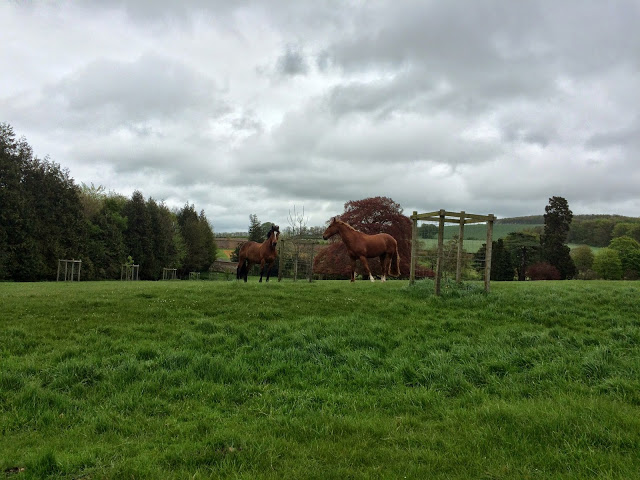 The view, which stretched for miles, was often obscured by cloud, although the rain held off. 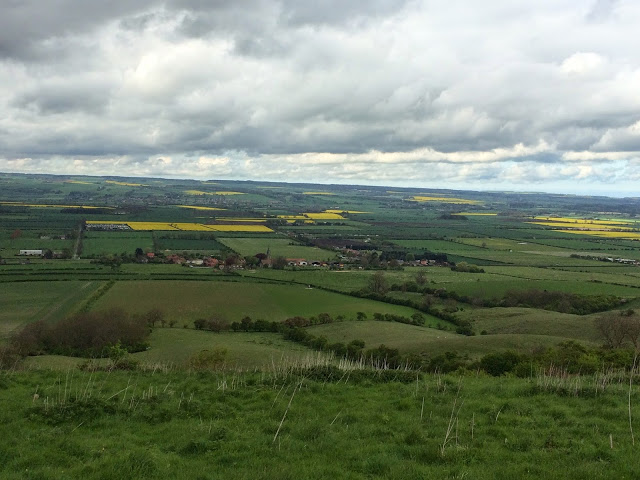 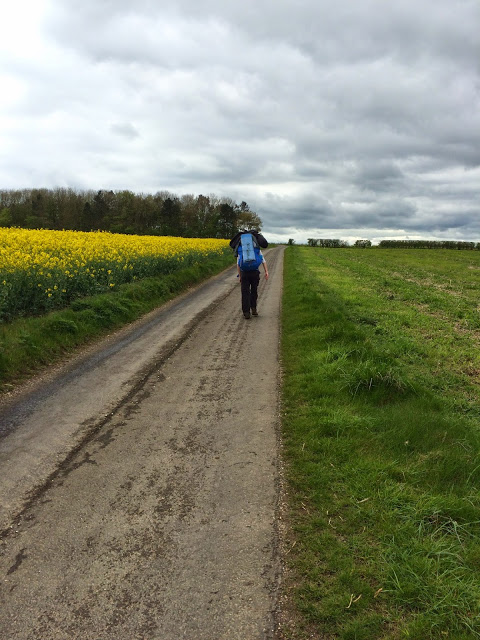 We were aiming to get to West Heslerton for lunch at around  3pm but by the time we arrived we were running two hours late. We wouldn’t make the campsite before dark. Over food we decided to cheat and get a taxi for part of the way.  They thought we were a bit odd in the pub with our backpacks asking for the number of a taxi. The taxi driver thought we were hilarious, wanting to be dropped in the middle
of nowhere to walk the last few miles, he could barely keep from chuckling out loud.
It was a different landscape here. The sun had come out and there were meadows of grazing sheep, blossom trees, pastoral English village loveliness. We had to do a bit of a detour as there was a sign about a bull and calves in a field, alternative routes and danger, and Poppy wasn’t
taking any risks. 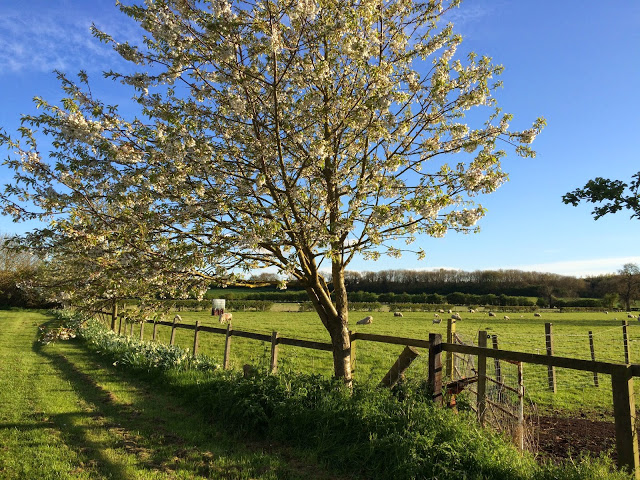 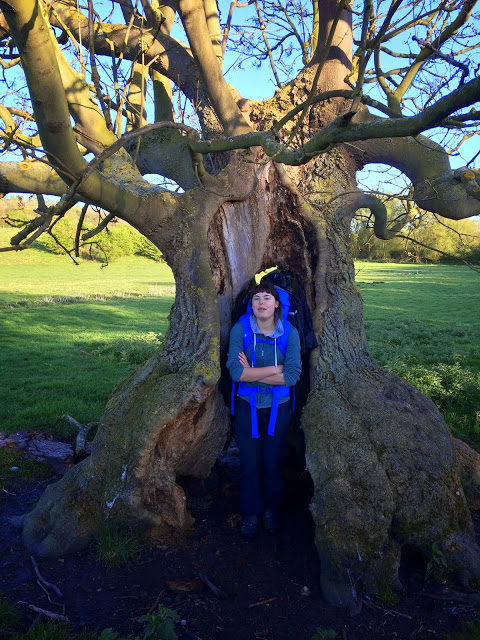 We arrived at the farm at 8.15pm. There were old Volvos in the farmyard, a few caravans at the back, but no sign of any tents, and we couldn’t get an answer at the farmhouse, so we pitched our tent on a likely bit of grass with a splendid view, next to a barn full of cows and sheep. Subsequently we found we were in the wrong place. We should have camped in the orchard on the other side of the farm where the toilet block was. The farmer and his wife didn’t mind though. They said we could use the bathroom in their house.
I grew up on a smallholding called Bethany. My parents didn’t have much money, but they had space and big hearts, and they extended hospitality to anyone – and I mean anyone – who needed it. They never locked the door to the house.  People stayed over in the living room, camped in the field, lived for a while in the caravan or in the sheds in the field. As I walked through the garden to Hill Top farmhouse toothbrush in hand, a little girl in her pyjamas waved to me from the upstairs window. The tiles on the bathroom wall reminded me of Bethany. The door which stayed unlocked all night did too. I felt quite
at home.
23 miles 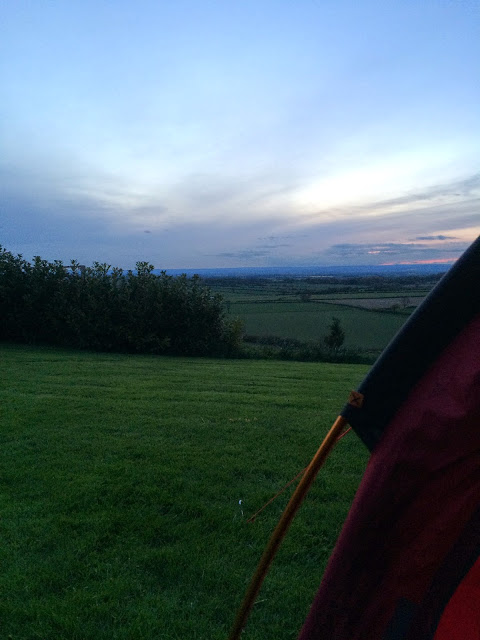