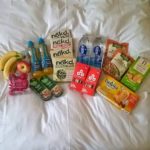 One of the issues on this walk so far has been, what will Poppy eat? If she eats wheat, she has awful stomach ache and feels ill. So that means no sandwiches, no toast, no cakes or biscuits. Most easy travelling food is out. She has to read the ingredients on everything. Most of the [...] 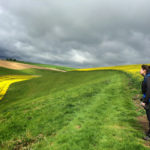 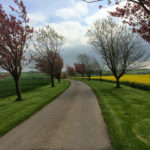 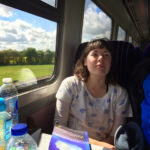 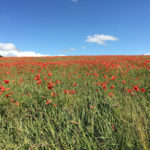 We stayed with Mark and Sarah in York and caught the 6.35am bus to Market Weighton. (Thanks Mark for driving us to the station so early and saving us an extra mile of walking). I was daunted by the mileage ahead of us and the possibility of storms, but Poppy’s mind was elsewhere. Just before Pocklington she had an [...] 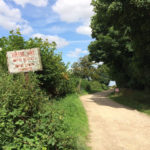 I don’t like bridges. I don’t like small bridges and I don’t like big bridges, but at least you get over small bridges more quickly. If I’m in a car I often close my eyes (luckily I don’t drive). If I walk, I go as fast as possible without looking left or right. So there’s this huge river [...] 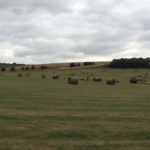 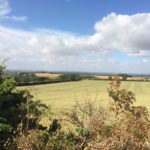 The lovely Irene packed us into her tiny car – four people, three rucksacks, two dogs, one of each of the latter underneath the parcel shelve in the boot – and drove us back to the path in the picture book village of Tealby. Irene has an Olde Worlde sign in her breakfast room saying No Singing, No [...] 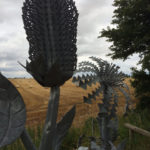 Today was meant to be a long one. I measured it on my phone and it was nineteen miles. Johnny’s feet weren’t up to nineteen miles. I’d done a bit of research in the evening and decided we could walk to Belchford, get a bus to Horncastle, then walk to Woodhall Spa, cutting six or seven miles off [...] 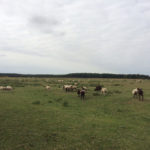 Our Bed and Breakfast in Woodhall Spa was called Oglee and was run by a friendly woman and her son Stephen. Stephen told us he had Aspergers, and many other things about his life, including his love of football and his cat Bagpuss. But mostly he wanted to talk to Betty. He appeared whenever she did, and she responded [...]