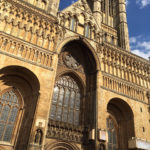 Today was our day off walking. In the morning, after a dog love-in over breakfast at our dog friendly B&B, I went to Lincoln Central Library to give a talk about my walk and the novel that will come out of it. It’s very odd to give a talk about a novel before you’ve written it. I [...] 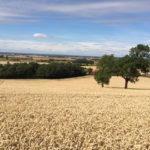 Today we set off from Waddington, just south of Lincoln, and walked along the Lincoln Cliff. More accurately a scarp, the Cliff is elevated approximately 80 metres above a landscape which stretches out flat for ever. The views were amazing. The sky was huge, the land went on and on, even though day was hot there was light breeze [...] 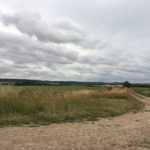 After hot night tossing and turning, sticking to the sheets, our landlady asked us at breakfast if we’d been comfortable. Yes, except for the heat, I replied. Oh, didn’t you use the fan? she asked. Back in the room we discovered the fan in the wardrobe. I’m definitely checking all cupboards from now on. At breakfast we also met [...] 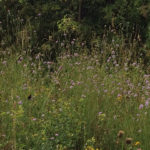 This would be a good way to spend an evening at The Chequers:  Arrive by car – someone else driving – in your glad rags with a friend or friends. Brings lots of money. Try one or more of their amazing cocktails. Order a three course meal. It won’t make you feel uncomfortable, because the portions are sized [...] 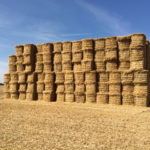 We left the Blue Cow through a gate in the corner of the pub car park and followed a footpath through some fields. This was fine for a while. We saw other dog walkers and it was obviously a popular morning stroll. Then the path reached a road and the other dog walkers turned back. The path was meant [...] 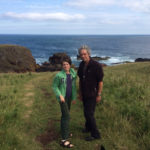 On Wednesday Johnny, Wilf, Bet and I went for a walk around the headland at St Abbs, the northernmost extremity of my walk, and the place where Etheldreda lived for a large part of the time she was in Northumbria. (It’s in Scotland now.) It’s beautiful here. Cliffs and clear blue sea, huge skies. Ethedreda was under the [...]

St Abbs to Berwick upon Tweed 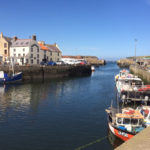 This week was mostly a holiday in Berwick upon Tweed, but on Monday I walked from St Abbs with Poppy and Mike, and on Tuesday I led a writing workshop at Berwick Library. Apart from the fact that some of the participants thought they’d come to a talk, the workshop went very well. One man said he’d opened up [...] 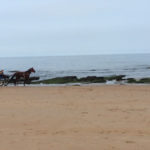 Leaving our car to fend for itself in Berwick upon Tweed for a week, we caught a crowded noisy train to Newcastle, then the Metro out to the coast. The Northumberland Coast Path begins with a walk out of Newcastle along the river, and I wouldn’t have minded that, but Johnny wasn’t keen, and I was quite excited to [...] 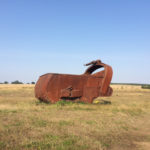 This stretch was always going to be a problem. We were meant to be walking to Newbiggin by the Sea, but they don’t allow dogs there. Despite the fact that the only person I’ve met that lives in Newbiggin has a dog. There was not a single B&B or pub that would take dogs and they’re not allowed [...] 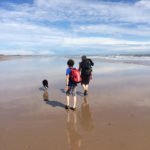 Today we walked along an eight mile deserted beach to a pretty town. It was the most enjoyable day’s walking so far, the day after the worst. Our lovely host from Middle Stobswood drove us to the coast at Cresswell, saving us an hour or two’s walking on roads and field edges. We got out of the car, walked [...]