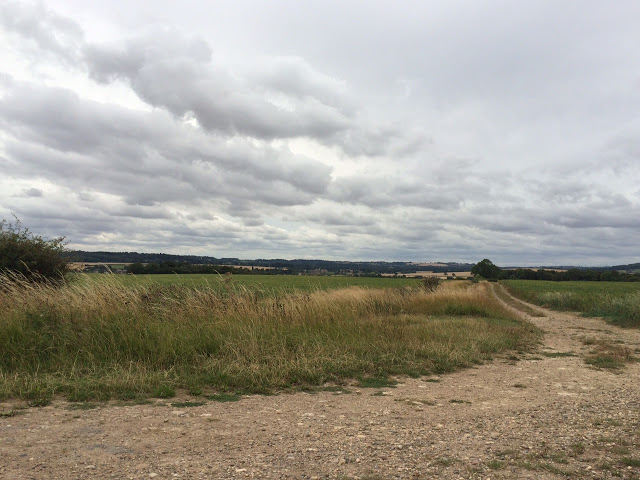 After hot night tossing and turning, sticking to the sheets, our landlady asked us at breakfast if we’d been comfortable. Yes, except for the heat, I replied. Oh, didn’t you use the fan? she asked. Back in the room we discovered the fan in the wardrobe. I’m definitely checking all cupboards from now on.

At breakfast we also met some other people doing the Viking Way.  They were a retired couple and he had done it before 11 years ago.  They were camping and they were very brown and they’d stopped for coffee having already done two miles and they didn’t really do breakfast. They were hardcore.
The next stretch of Ermine Street wasn’t so lovely as yesterday. It runs parallel to the road, but sunken lower, so the traffic noise is by your ears behind a band of long grass. To begin with the plants were interesting. Johnny was a little way behind me and Wilf, and we heard occasional cries of ‘rock rose’ ‘quaking grass’. But it soon became less interesting, and overgrown, dusty and noisy.
After a mile and a half we turned off onto field edges, There were big views and huge skies. The landscape is very photogenic, but samey to walk. One field of wheat is much the same as another field of wheat. Two miles of wheat is quite a lot. 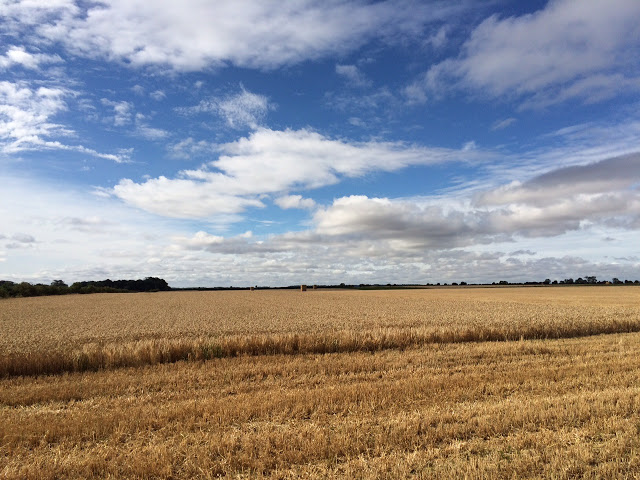 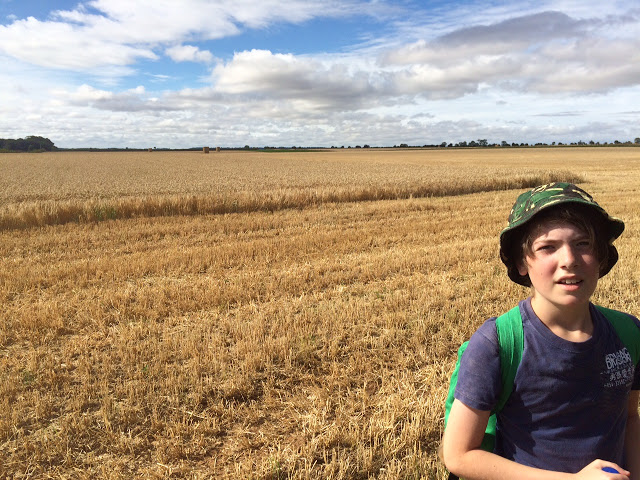 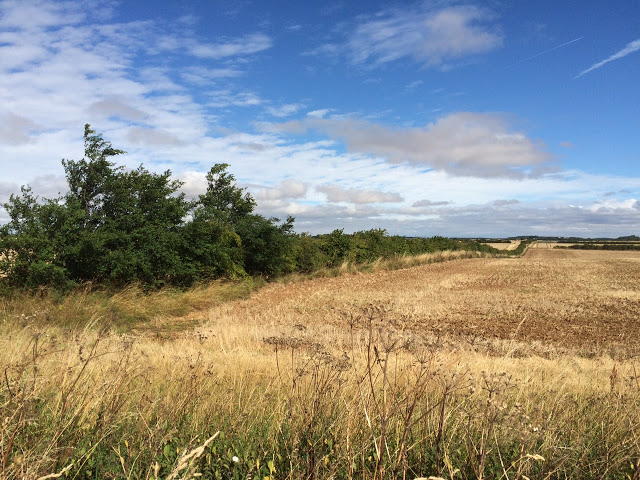 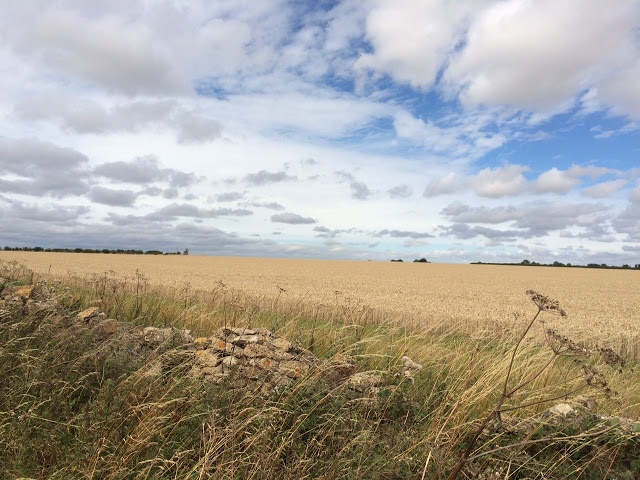 When it finally finished we were stared at by cows. 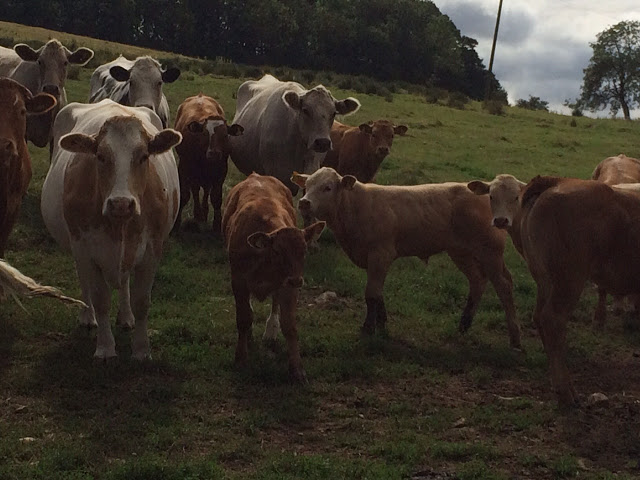 At Carlton Scroop we met the Viking Way couple again, having a rest on the green next to the pretty church. 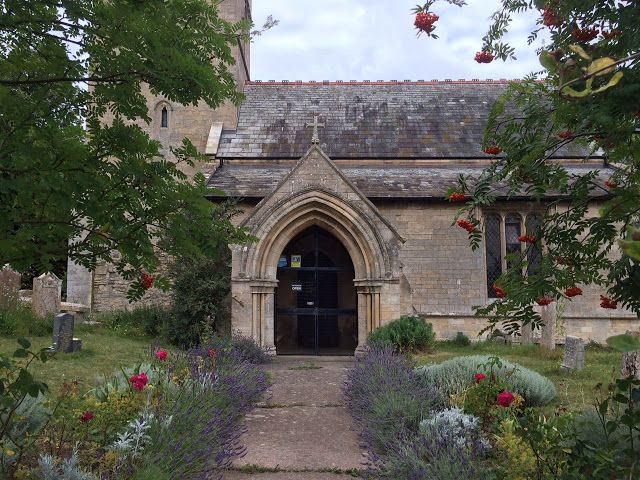 Wilf was struggling to get going. Here he is, waiting hopefully at the bus stop. 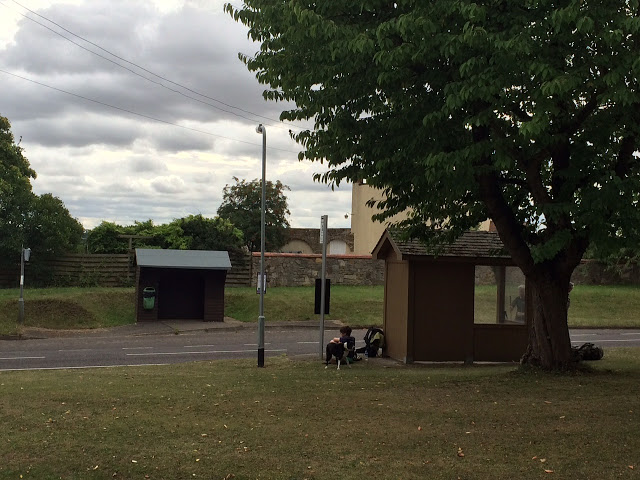 But there were no buses going the way we wanted to go – so onward. Johnny’s feet were hurting too. The Viking woman had given him a small compeed at breakfast time but he immediately lost it.

The next stretch of walk was more varied, with  long lines of trees 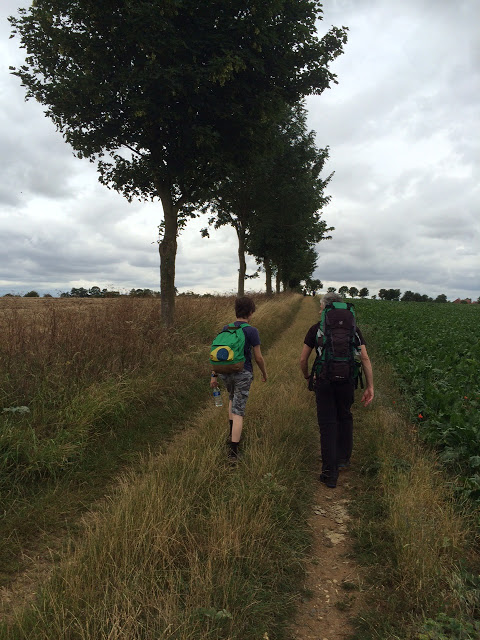 roads with views across the whole world 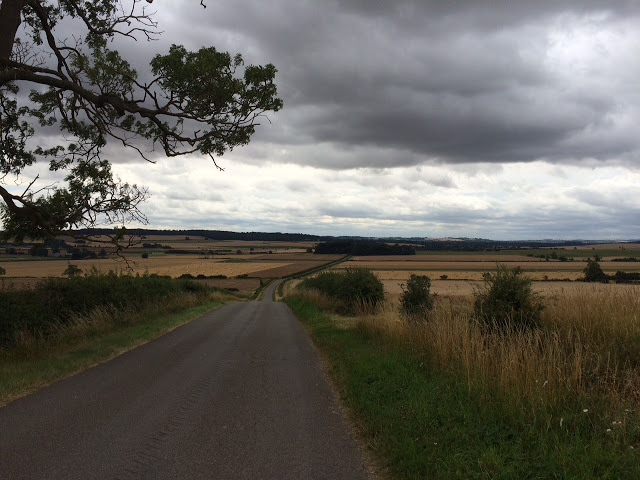 good spots for a rest 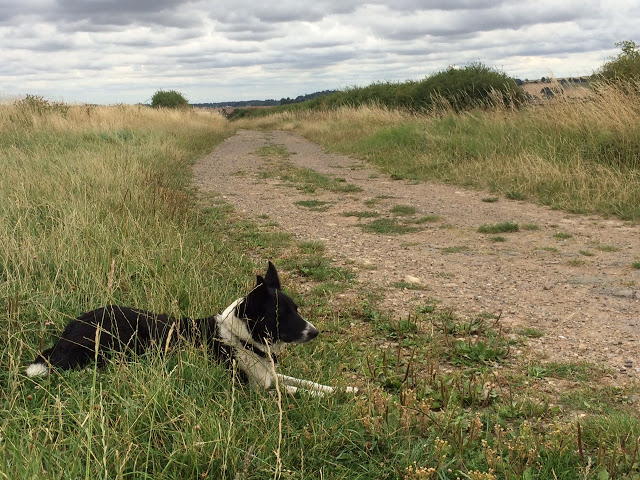 and this fish van parked in a field! 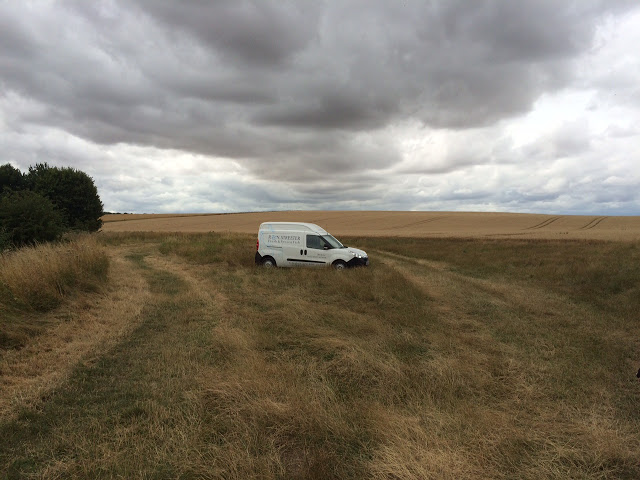 We walked under a railway and past  sewage works big enough for the whole of Grantham, then past marshland.. 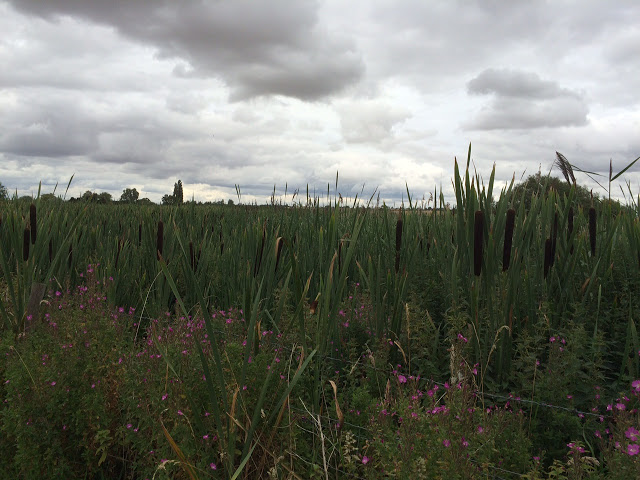 … into Marston where the pub was closed and the shop had closed down. Johnny and Wilf were both despondant.  The Viking couple turned up again, and we all sat on wall outside the pub eating snacks and ekeing out water. Even the outside tap was dry.
Then our taxi arrived.  The other couple were walking another six miles, keeping on this side of the A1. Our destination was still ten miles away, and I didn’t think the team were up to it. We got a ride to Allington –  – only three miles by road, but cutting five off our total – and it took us across the A1 which I hadn’t been looking forward to crossing.
In Allington there was an open pub, and a friendly welcome, and this house which Johnny decided was his new home.

The next five miles were mostly lanes and rutted tracks. Johnny was hobbling again, though Wilf had got his mojo back and chatted away. A feature of the walk has been the A-Z game. Choose a topic – eg. Animals – and everyone has to come up with an example for each letter of the alphabet. On this stretch we did games. Board games, team games. computer games – Kerplunk, Operation, Volleyball etc. It tends to distract people from blisters.

We crossed the canal into Woolsthorpe by Belvoir . 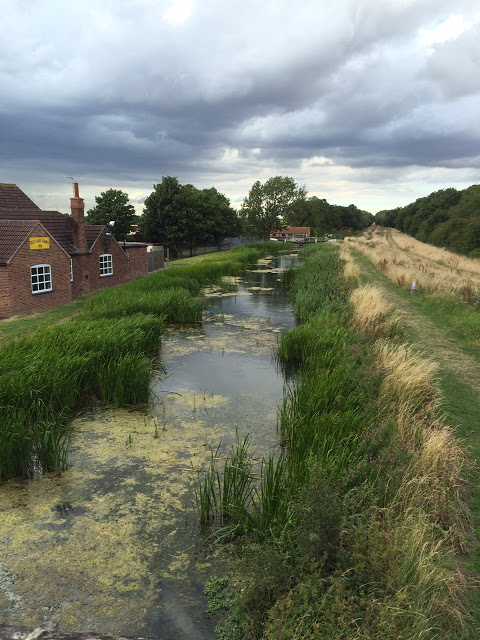 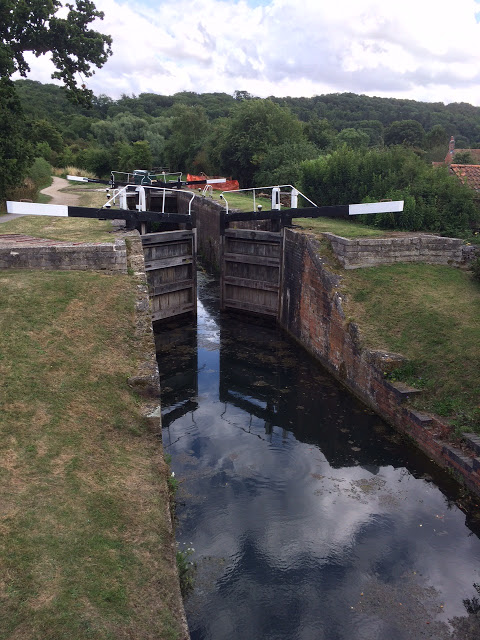 The skies darkened as we entered the village. With signs clanking at the crossrooads, castle on the hill
and glowering skies, it was a gothic welcome, worthy of a Hammer horror film. 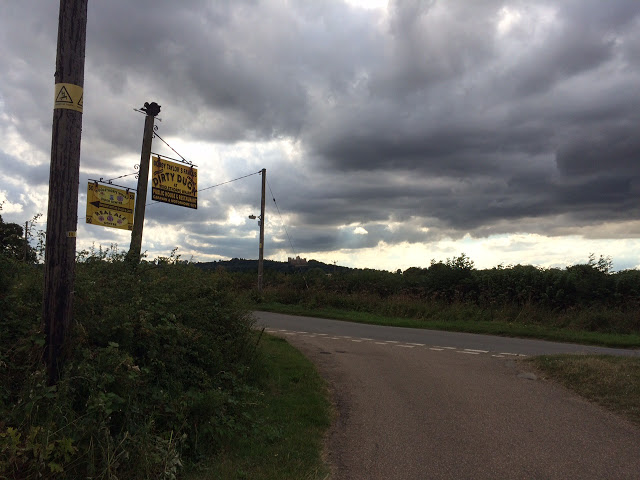 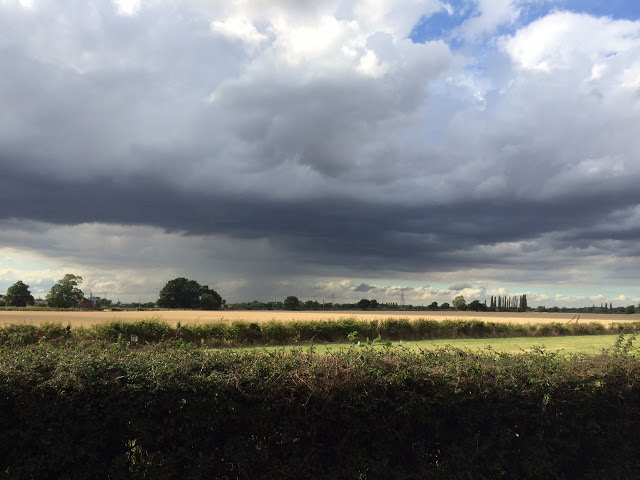 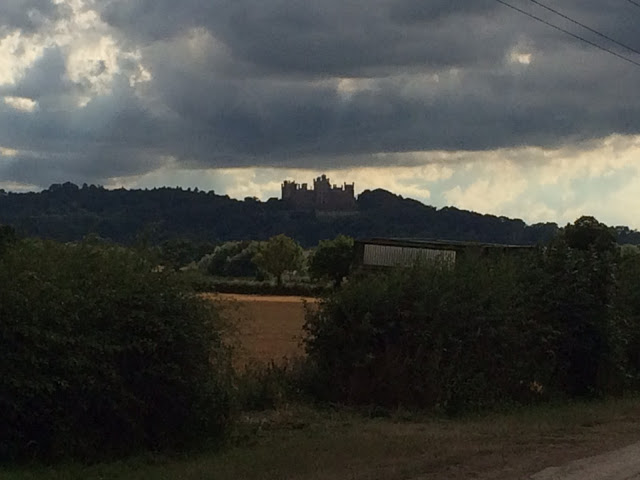 But the Chequers Inn is not horrific or gothic. Here’s the view from our stable door! 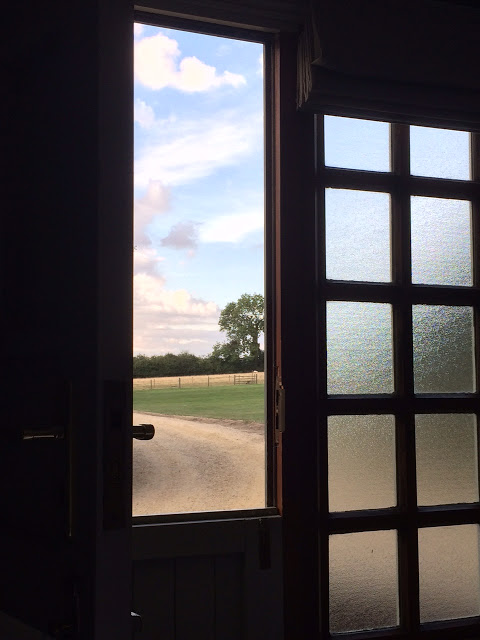