I don’t think I’ve laughed so much in a day in years. In the woods I nearly wet myself laughing at this photo of Poppy. 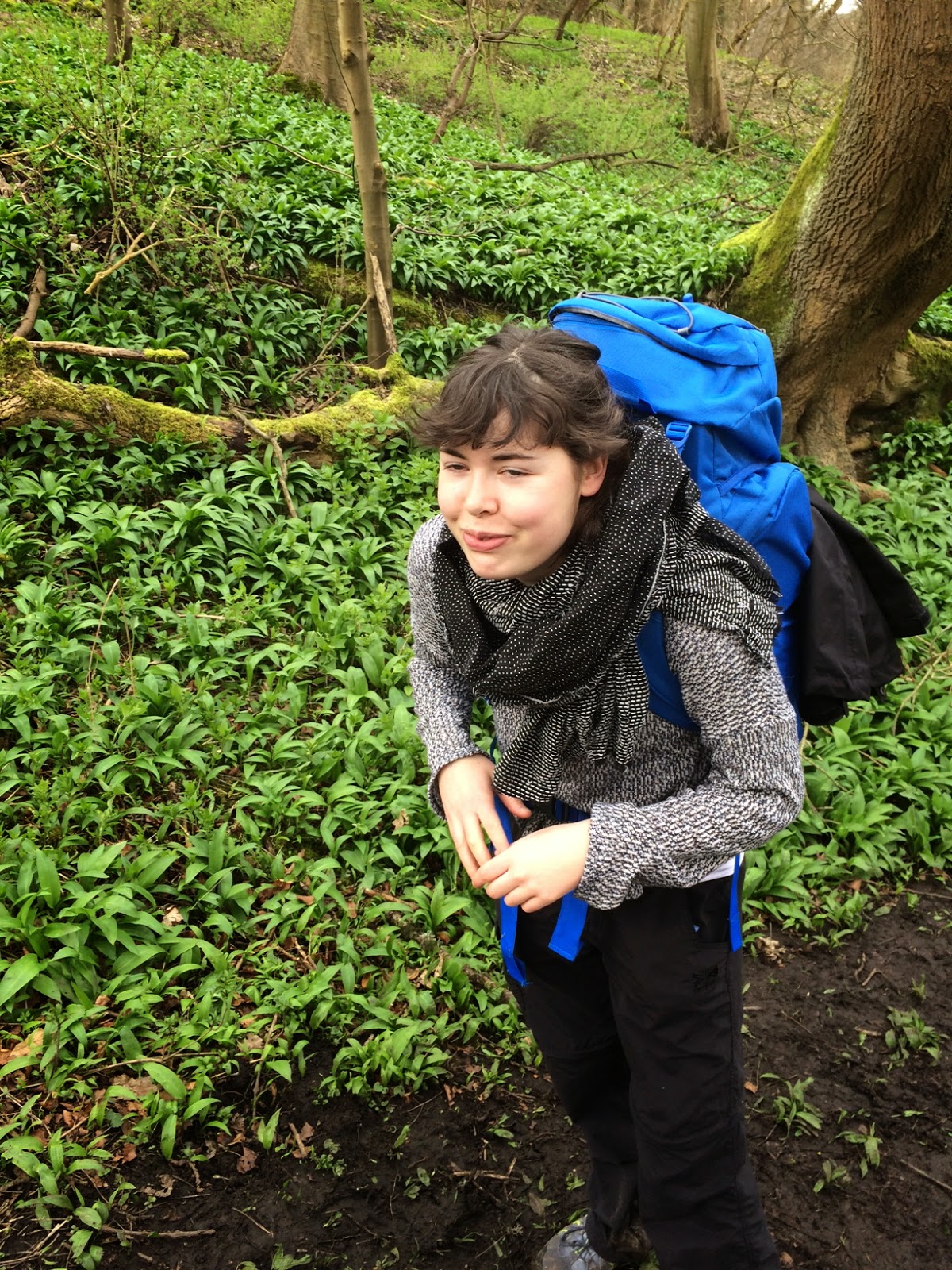 At the side of the road the dog and I were playing with the lead and Poppy tripped over the dog (which she insists was my fault), and fell onto the verge. We were both still in hysterics when a cyclist came. She looked at us and started laughing too.
I laughed when I went for a wee behind a tree and the dog came and weed next to me. Poppy laughed later when I went for another wee and did a little fart.
The dog thought we were mad. 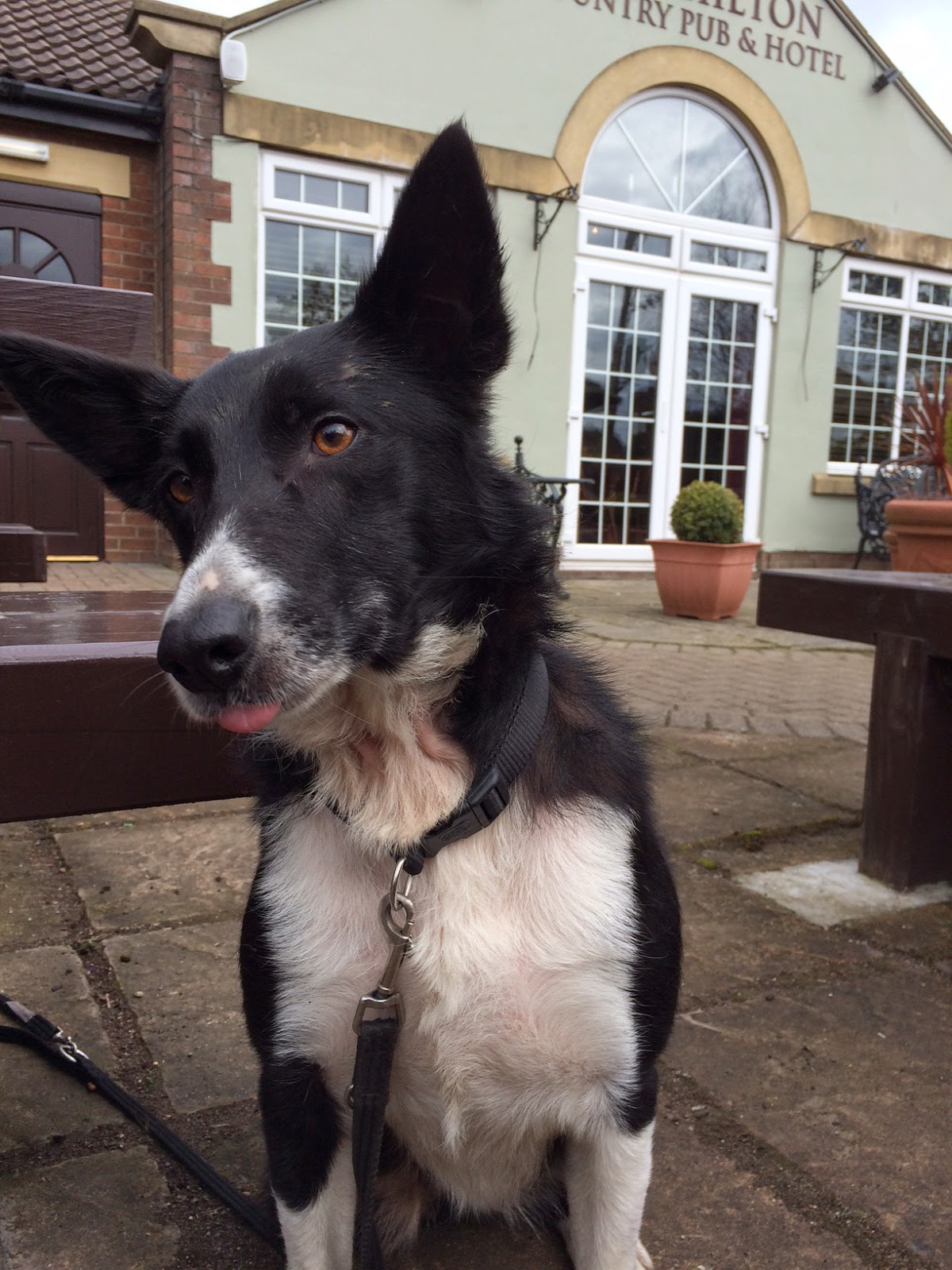 It got off to a good start, walking through woods full of wild garlic – so much garlic, I’ve never seen so
much. It covered banks and slopes, the sides, bottom and tops of the valley as the path wound along the stream. 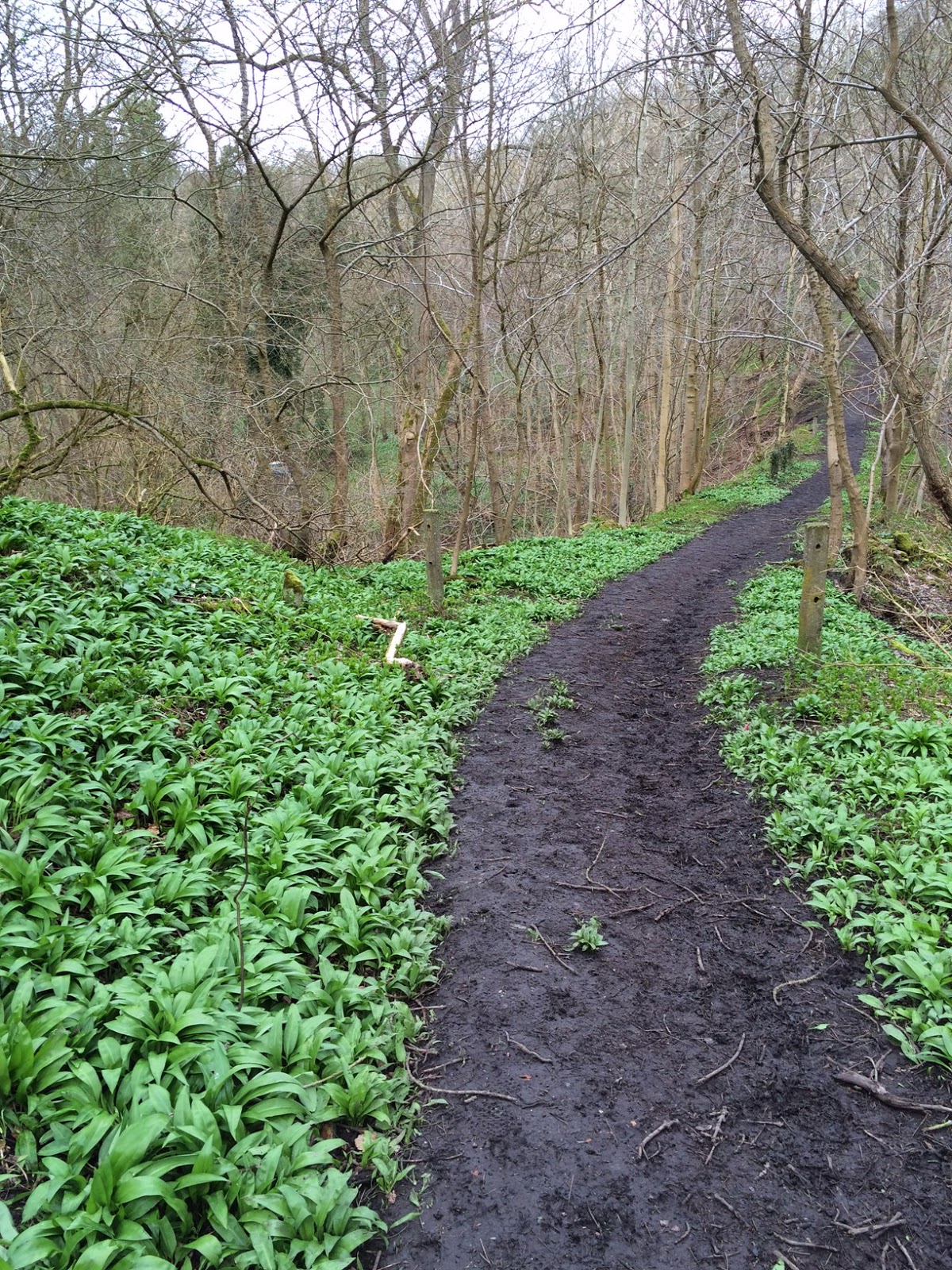 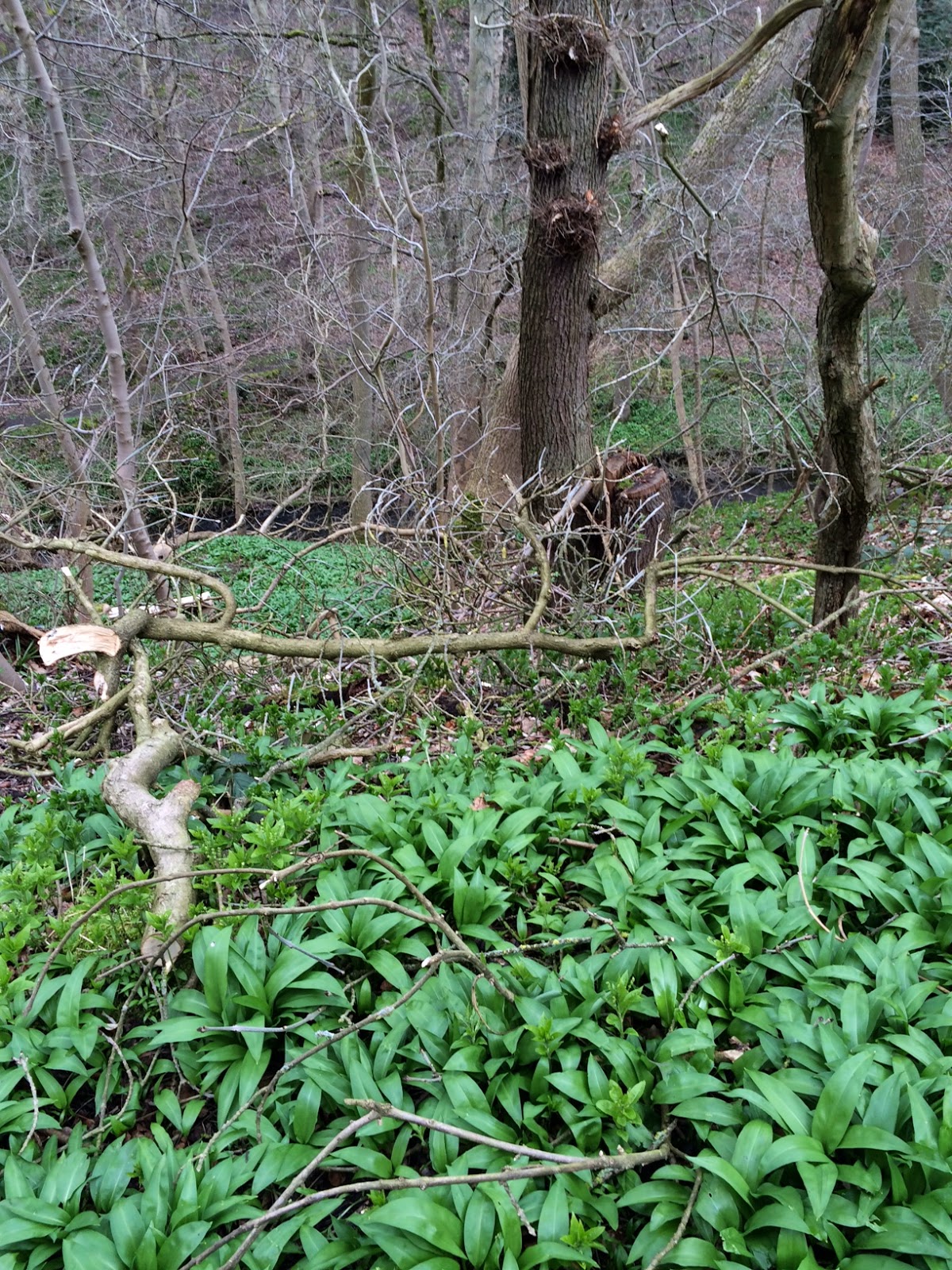 The smell filled the air and we imagined what it will look like in a few weeks when the flowers come out and cover the ground with white stars. There were patches of wood anemone and wood sage, but it was mostly garlic. The dog decided to combat the smell with something smelly of her own finding which she duly rolled in. I thought of the man we’d seen in the pub the night before with neat little vampire teeth and thought we probably wouldn’t see him here.
We stopped at a pub for lunch – staying outside as the dog was too smelly to take inside. 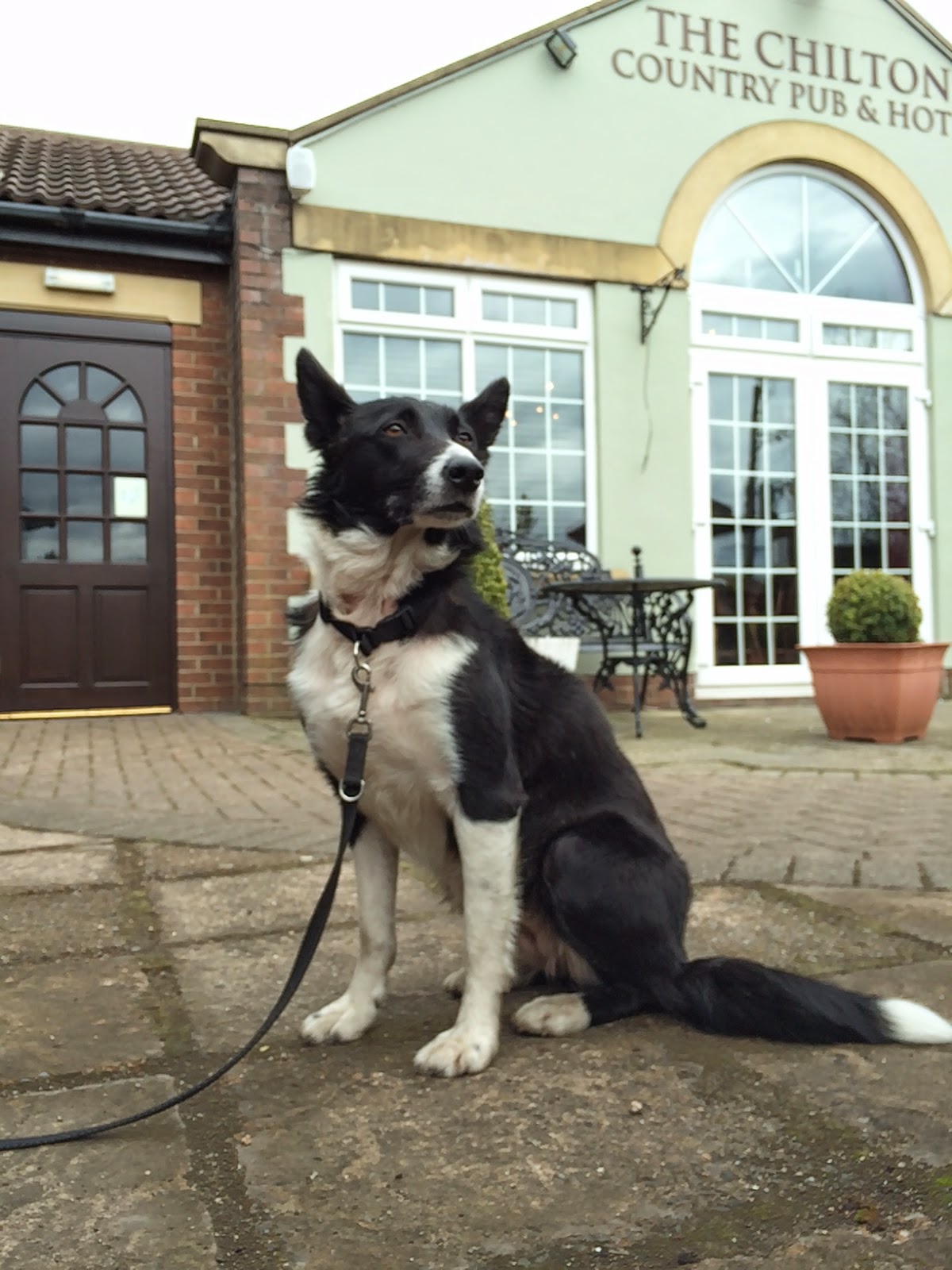 She still managed to charm people though. She’s being a complete tart on this trip. At the Lambton Arms last night she made best friends with a group of men playing pool, and with all the staff this morning. She rolls over and puts on her I-love-you-more-than-anyone-in-the-world face. Today she collected a nine year old boy who came along with us throwing sticks for her, leaving his grandad far behind. We thought we’d got him for good.
The second half of the walk was harder. Long straight paths that went on and on, industrial sites and the
backs of things. 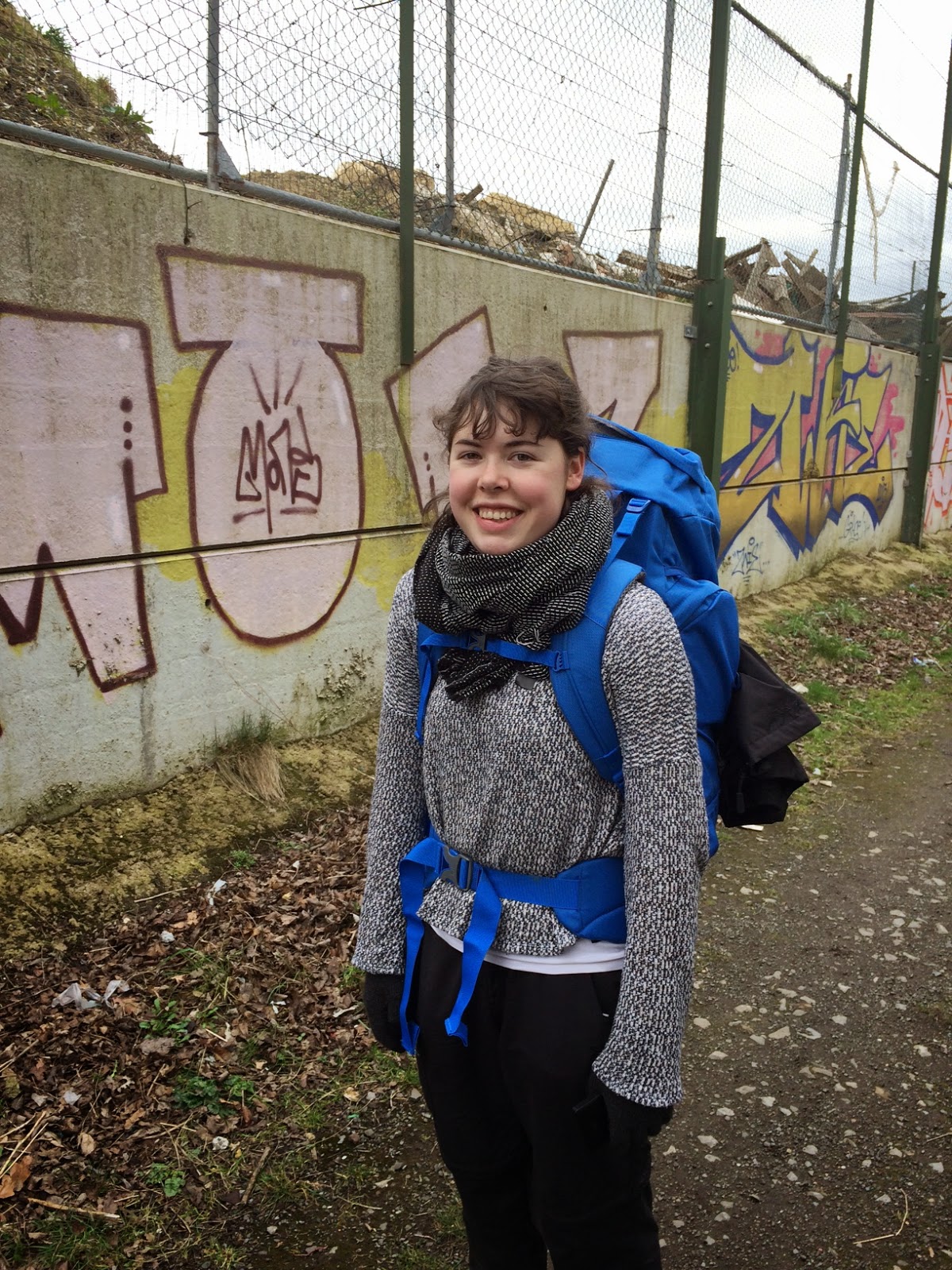 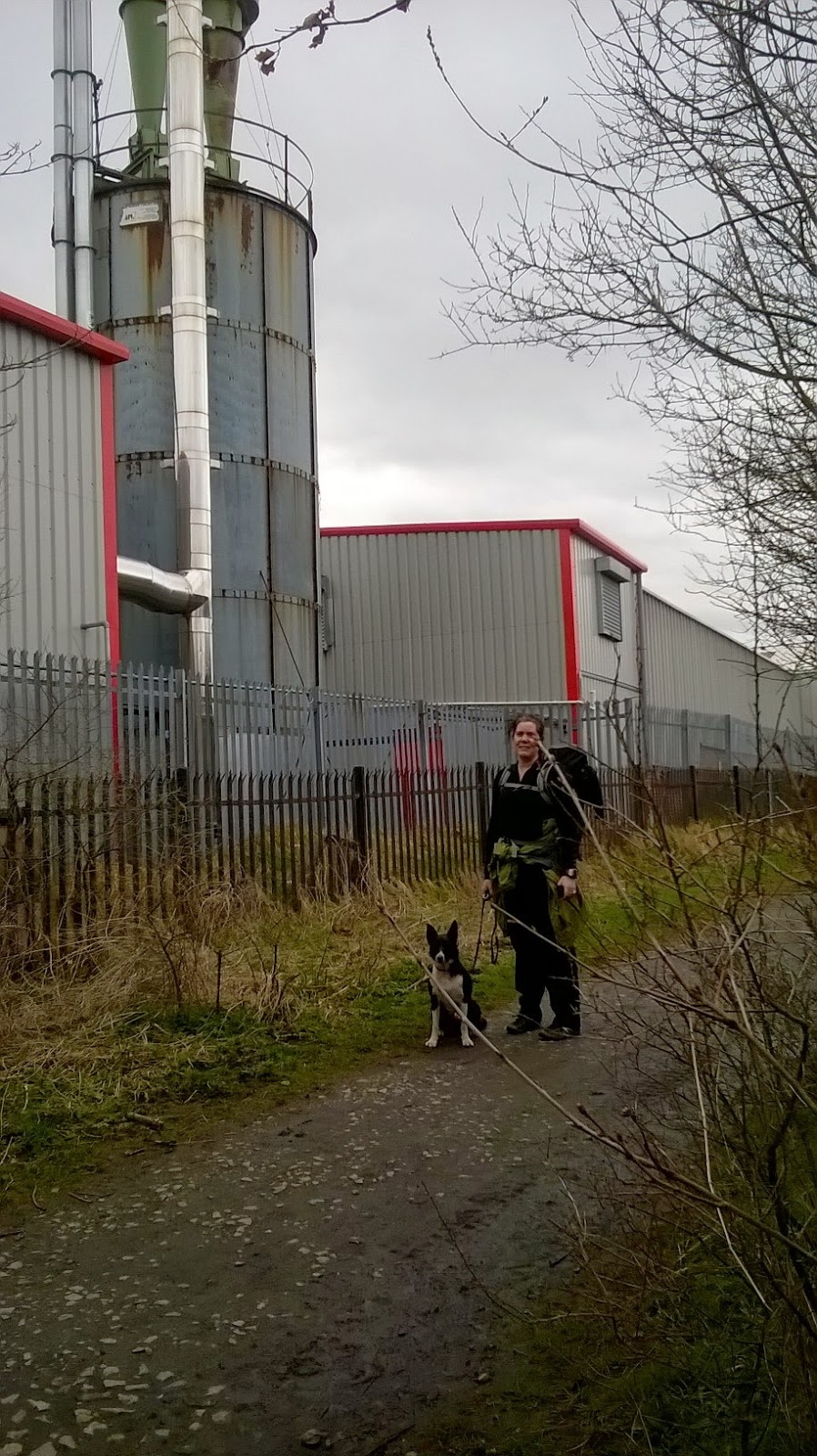 The underneath of things. 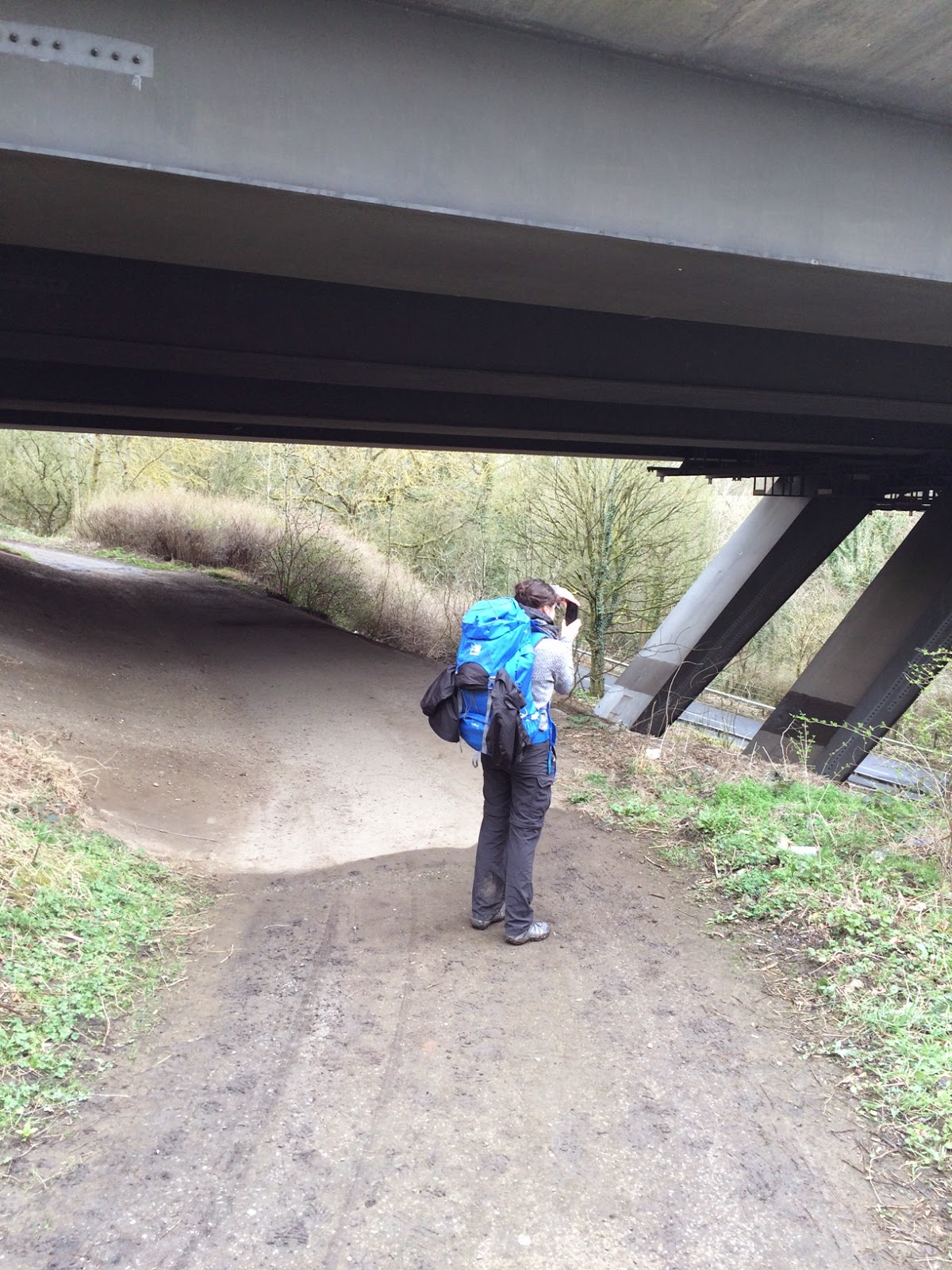 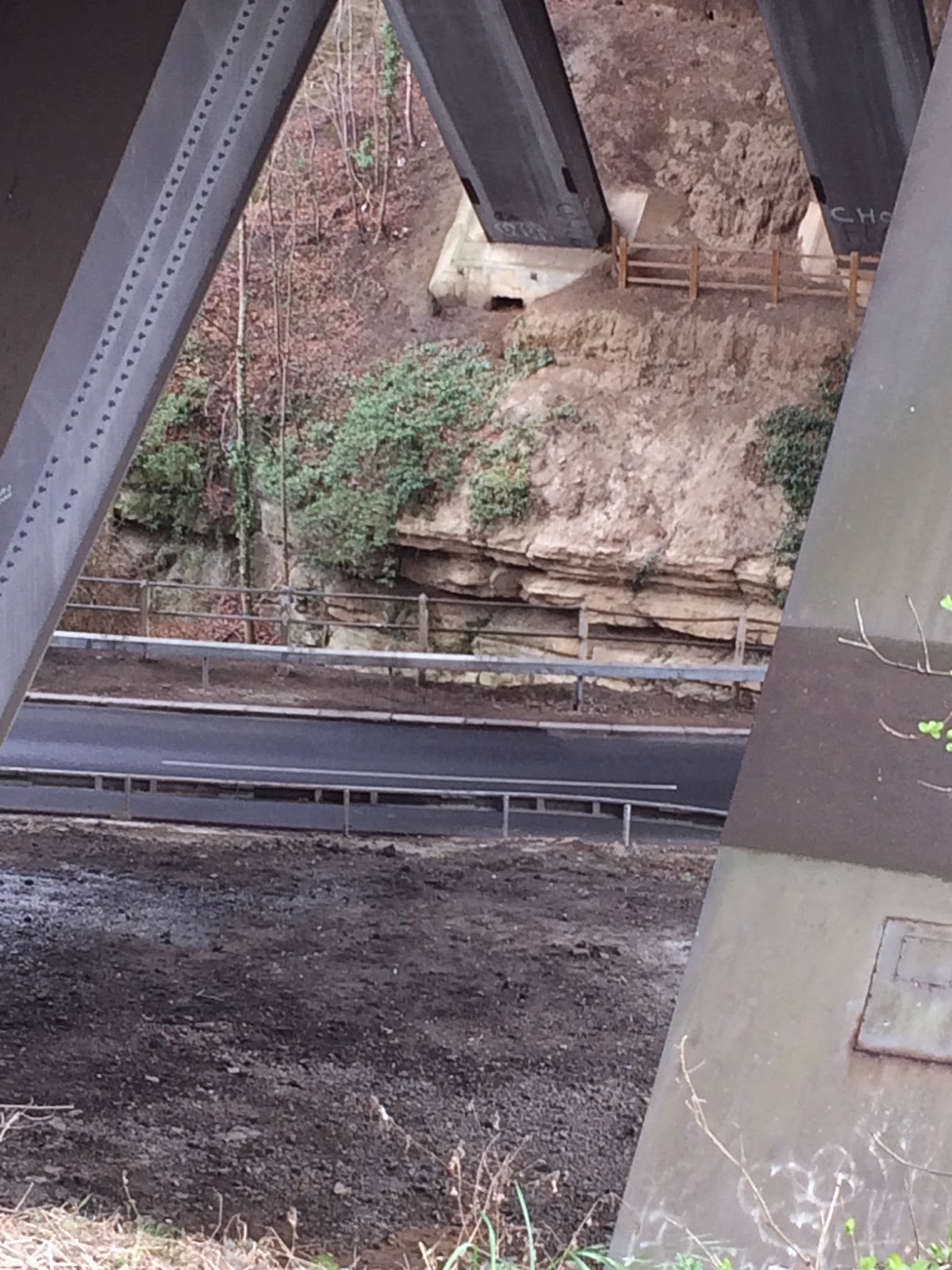 But there was blackthorn too. 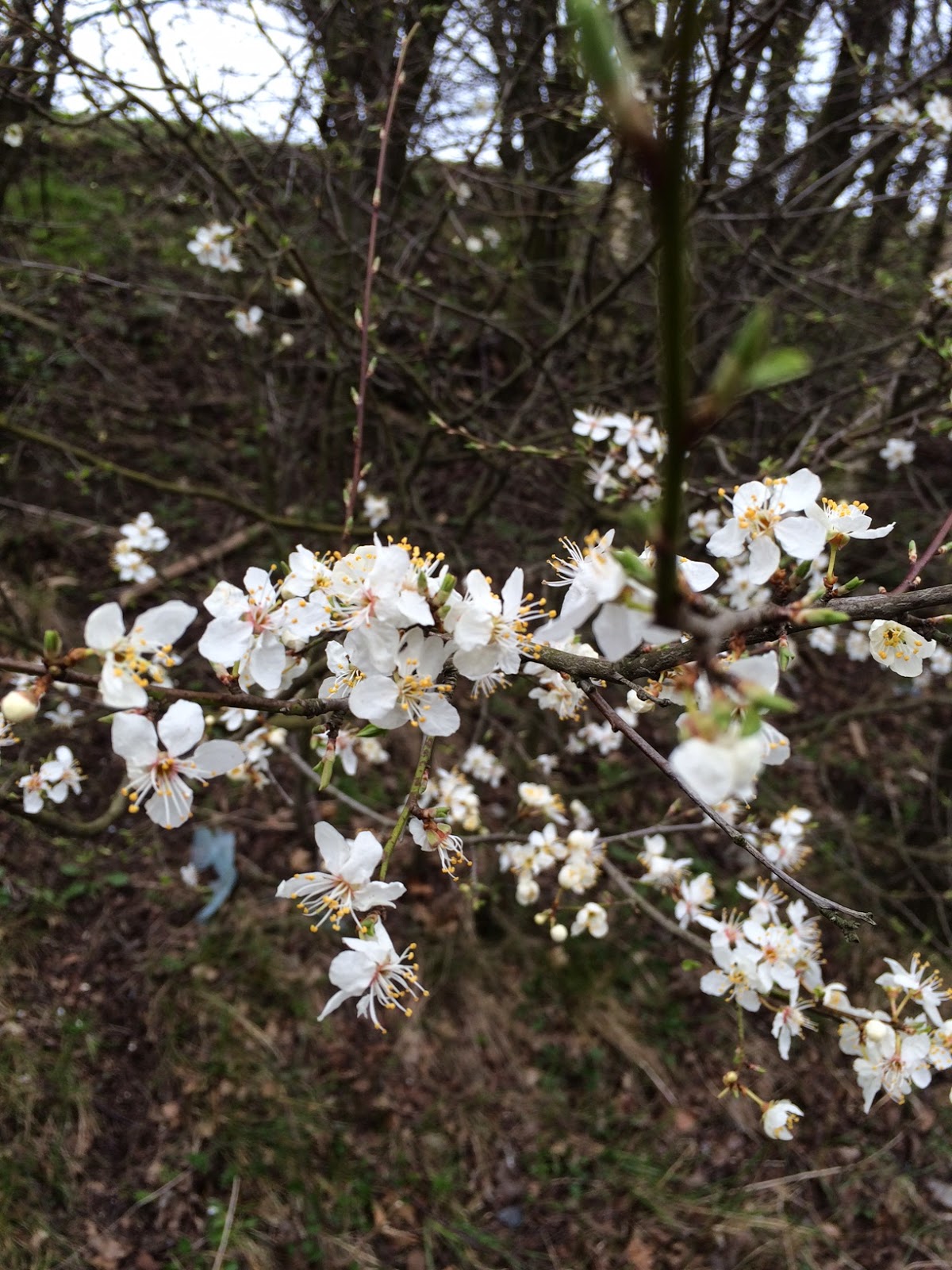 We saw the muddiest man we’d ever seen riding a motorbike along a dirt track – and Poppy’s spent whole summers at festivals, she knows about muddy people. He looked like the mud was ingrained in his skin and he was made of it. After he’d passed we cracked up laughing – again! 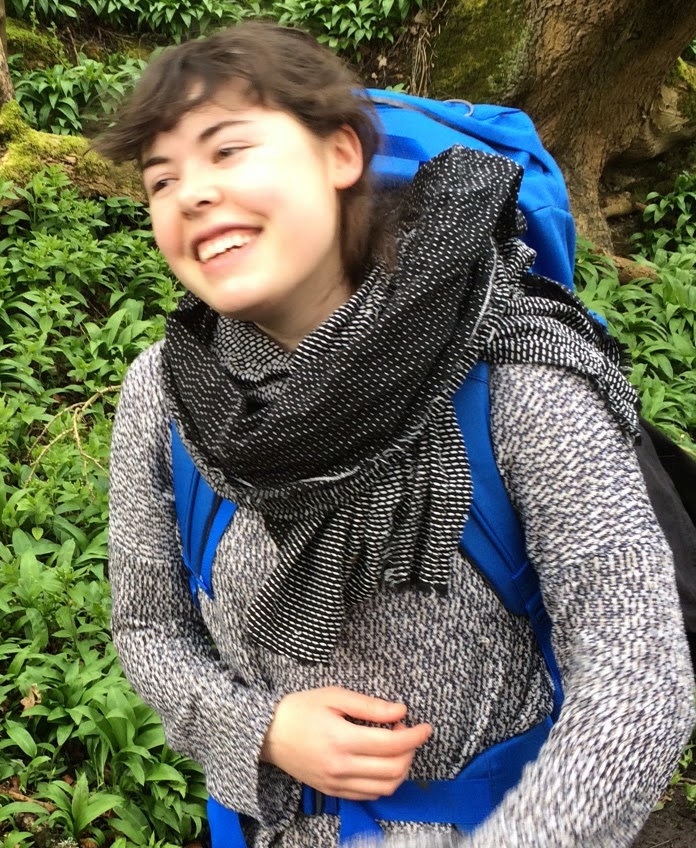 Eventually we reached Murton and had a cup of tea and a hot shower. We’re all laughed out now, watching The Voice and ready for bed.
11.5 miles
0 comments… add one