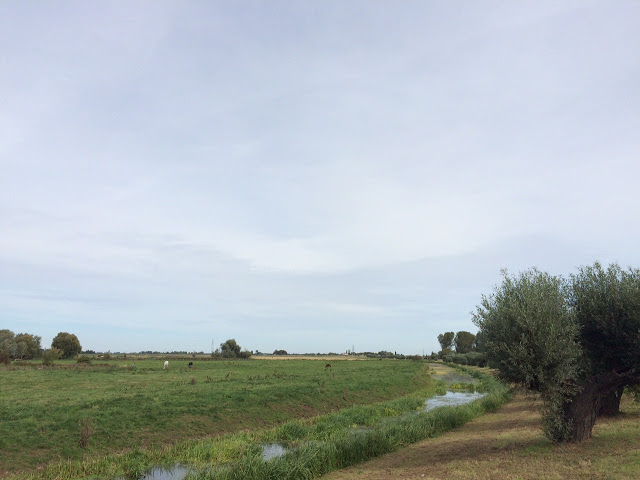 I was quite excited when I booked the Dog and the Doublet. I wanted to stay in the middle of nowhere in fens. Last night I was too tired to take it in, but this is the view looking east from the front of the pub. 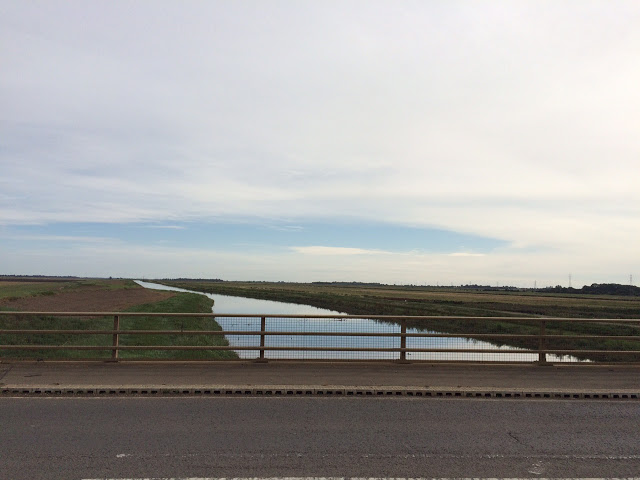 If you look in the other direction you can see Whittlesey – only a mile and half away – but this morning, I’m looking this way.
Whittlesey, when we reached it, was lovely too with it’s rivers and willow trees. 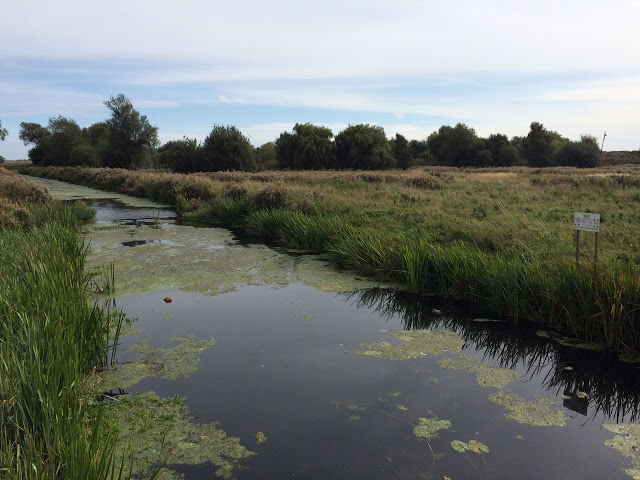 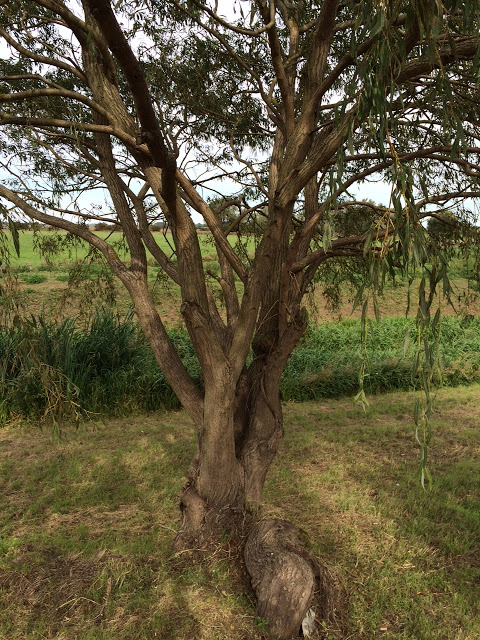 And its Straw Bear which they like to parade around the town once a year and then burn for charity! 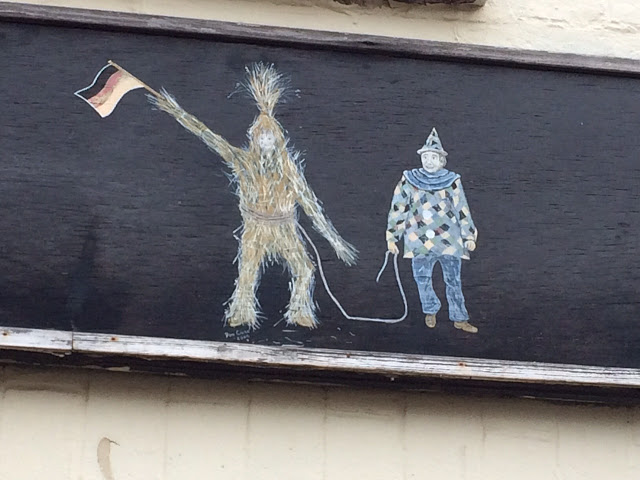 A friendly woman working at the level crossing let me use her level-crossing-hut-toilet. I asked her if it was a lonely job, sitting there on her own all day, watching a screen to see when the next train was coming, going out and closing the gates, making sure nobody collided and died. She said she didn’t mind it.  I envied her a little bit. Thought maybe it would be a good job for a writer, with all that time to let your imagination roam. I suppose if you let it roam too far you’d be in danger of missing the signals and creating mayhem. I asked Johnny if he’d like it, and he said no, he’d get itchy feet.

After that we turned off the road onto the first of a number of badly maintained paths. This one was full of nettles, thistles and elder. 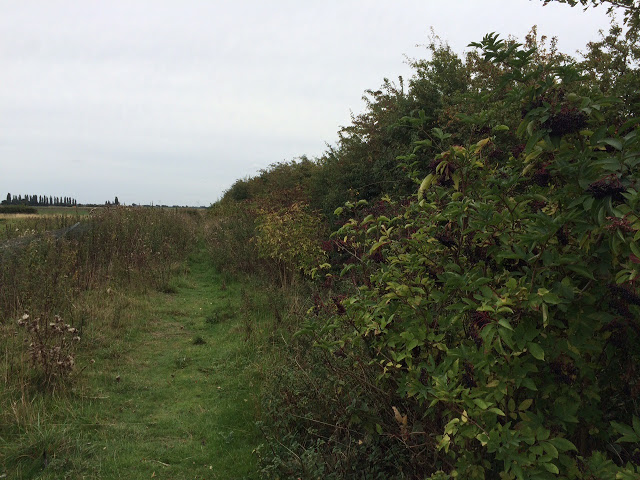 But we made these two friends at the end of it, Palamino and Sally the dapple grey. (Johnny named her Sally inadvertently). 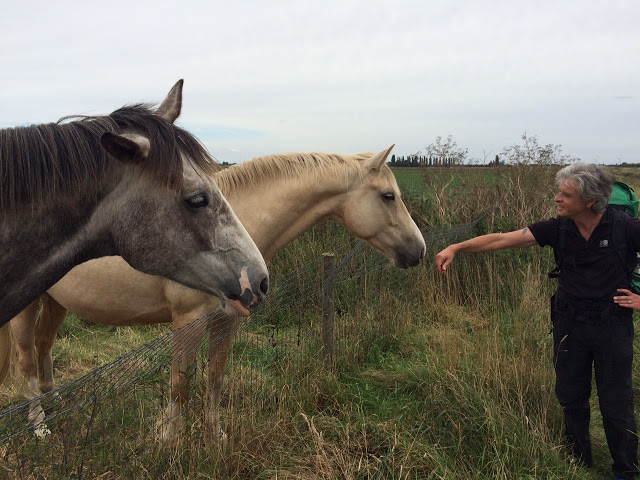 We reached the Twenty Foot River (I love the utilitarian names of some of these Fen rivers.) 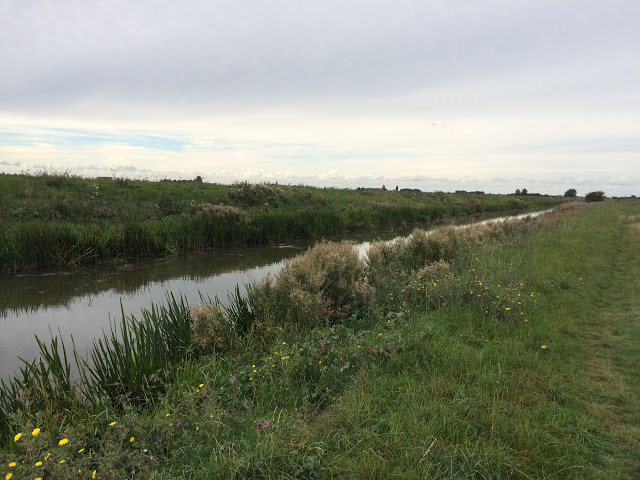 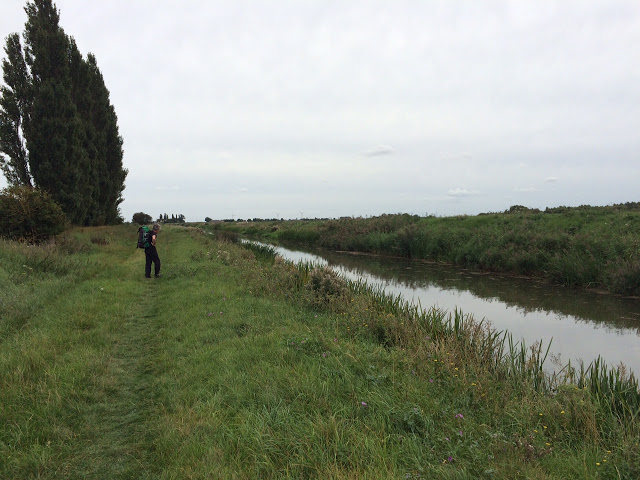 Walking along the bank was kind of what I’d been waiting for – all the way from the Humber, and I loved it.
Watching cars in the landscape far away, moving in straight lines, but with no sound. Being higher, here on a six foot bank, than everything else you can see apart from trees and manmade objects. The quiet. Yesterday we could hear the A1 as a constant backdrop. Here the traffic noise was erratic – a distant engine, a light aircraft flying over, accentuating the silence in between in the same way that the farmhouses, trees, wind turbines, accentuated the flatness. 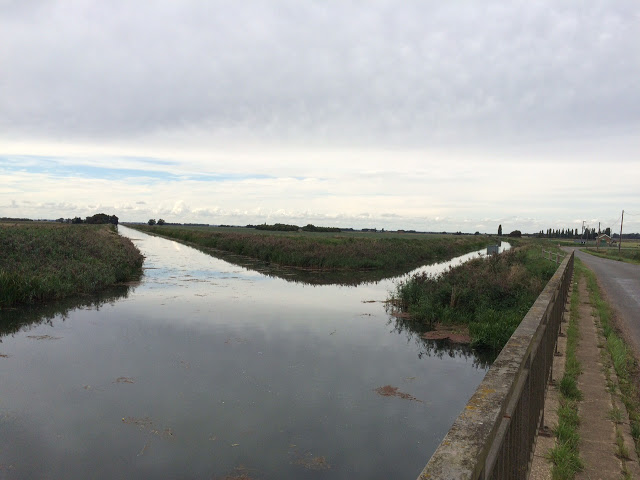 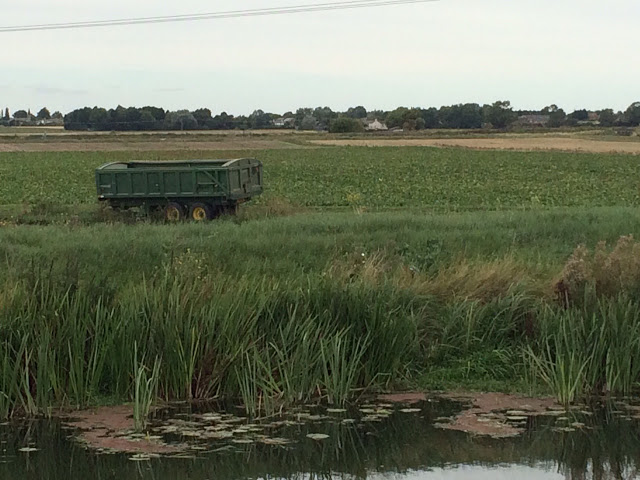 7 miles in we stopped at the pub in Turves for a pint. We met a cyclist there who was keen to chat and  tell us of his travels. The first place he mentioned was Hebden Bridge, where he stayed in the summer – he camped at the New Delight. He came from Peterborough, so it wasn’t quite the same as meeting someone from Hebden, yet again, in a remote place miles from home, but nearly! Then we walked on to Quakers Drov 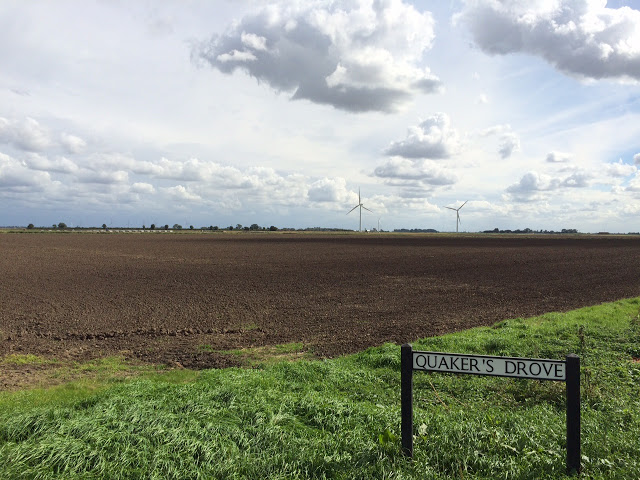 This is a long path straight across farmland. All the paths we walked today are dead straight – our route on the map geometric, sharp, angular. The day was warm by now. The road turned into a track, then a grassy track, then disappeared altogether for a while into a growth of nettles and thistles before returning as a field edge

Johnny didn’t like this bit at all. First he got annoyed by all the wind turbines he could see. Then he got annoyed by me for not wanting to have an argument about wind turbines. For while he marched on ahead. When I caught up with him and asked if he was OK he said the electricity lines were messing with his magnetic fields. I looked up, and sure enough, we were walking under an electricity line.

We set off again, him in front, me wondering if I could tell what my magnetic fields were doing and how I would know if they were upset. 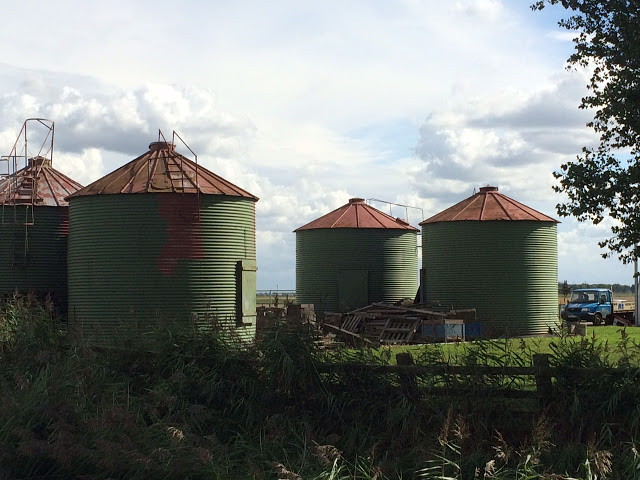 I actually quite liked walking along that Quakers Drove. The land was completely flat, not even a vague slope in sight, so I felt like I was walking along the bottom of something, and I felt very small. I could imagine being
watched from above, and how slow my progress would seem. Like a beetle crossing a huge table, or a turtle in the desert. I was hot, and something about the endlessness, the monotony, reminded me of days when I was a child and it seemed like things could go on and on and the end wasn’t even something that was an issue, it was more about the state of being.

A haystack at the end of the path was doing a Dog in the D – existing forever on the horizon and never getting closer. I imagined it as a house and someone in it watching our approach, what they might be thinking. 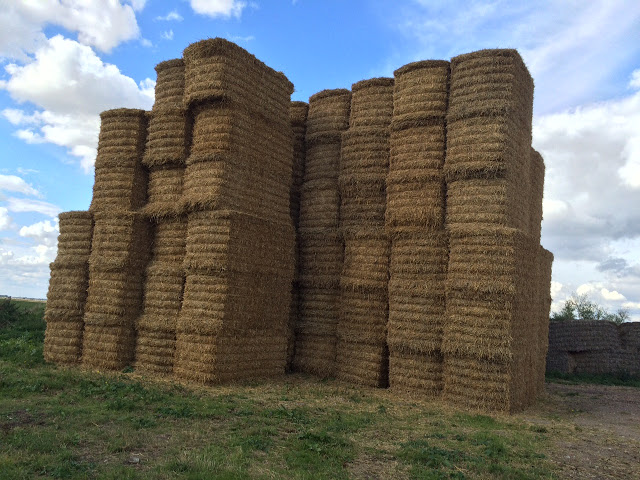 When we reached it Johnny said it was the most unremittingly boring path he’d ever been on and he was never in his life going to go walking in the Fens again. 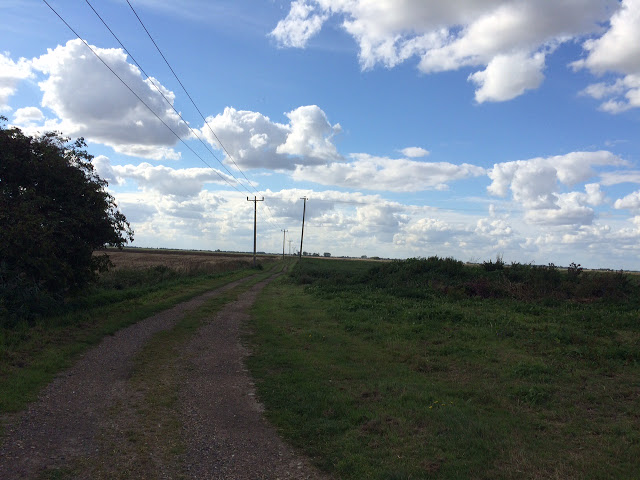 Now we were back on the banks the Nene – the old route of the river that winds rather than being channelled into a straight line. Nobody had walked the path for a long time and we were wading through grass, nettles and hogweed. 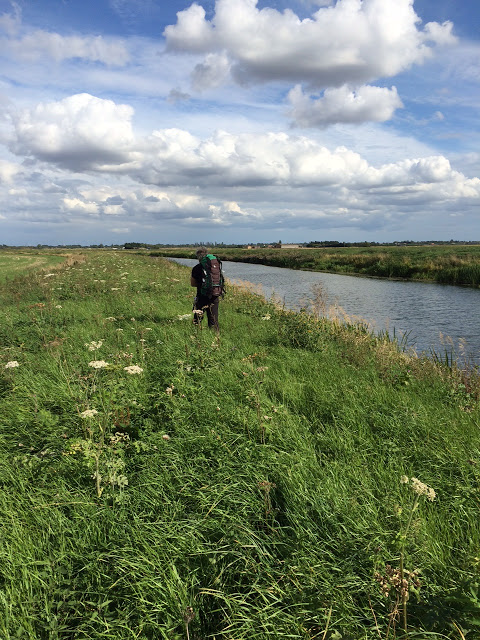 This is obviously the best way to travel in these parts. 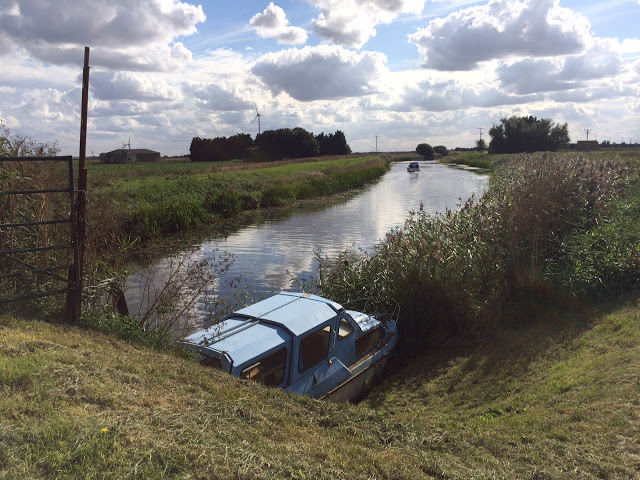 Then we reached our B&B and our en-suite had a bath, which was a wonder and a delight..